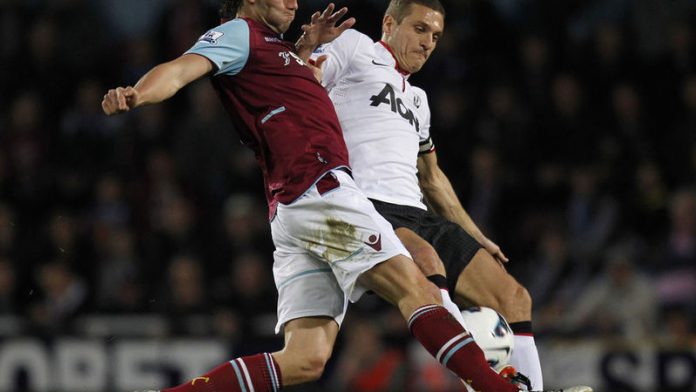 Robin van Persie hit a 77th-minute equaliser to leave United 13 points above nearest rivals Manchester City in the Premier League with five games to play, but Manchester United manager Ferguson was critical of the hosts' approach.

"We know how they play – the ball's in the air most of the time, you've got to defend those things, and they're very, very aggressive, as we've seen tonight," he told Sky Sports after Wednesday's game.

"You hope there's a strong referee – I'm not so sure we got that tonight."

Carroll claimed afterwards that his "momentum" had been responsible for the collision, but Ferguson said the on-loan Liverpool striker should have been sent off.

"I think it's obvious. I don't think you need to dwell on that. It's an obvious red card, but the referee's seen it differently," he said.

Ferguson also gave short shrift to complaints from West Ham manager Sam Allardyce that Van Persie's equaliser had been offside, despite television replays suggesting he had a strong case.

'Victory taken away from us'
Asked about Allardyce's comments by a television interviewer, Ferguson looked incredulous before replying: "Really? I didn't see that."

Allardyce, in contrast, felt that his team had "possibly had a famous victory taken away from us".

"If I think it's an easy decision and he [the referee's assistant] has not given it, it's a major decision that's gone against us. But we've gained a very precious point from a very good performance."

Allardyce also disagreed with Ferguson's contention that Carroll should have been sent off.

"I don't agree with that. I think at the very most it's a yellow card because Andy Carroll is committed to try and go for the header and can't stop," he said.

"You can't commit to a corner and set off running and even though you know you're not going to get it, just stop dead. Red card? Never for me. Yellow, perhaps, but not a red."

The visitors' attackers dominated the final stages, but it was the United goalkeeper, De Gea, who Ferguson singled out for praise.

Allardyce revealed in his post-match press conference that he had asked Vaz Te, Kevin Nolan and Winston Reid to put pressure on the Spaniard at set-pieces, and Ferguson felt he resisted their attentions manfully.

"David has been improving all the time all season, developing into a fantastic goalkeeper," he said.

"It's just a matter of experience of the English game. He's got stronger, his training performances are really good, and he's shown that again tonight. As we've been saying for quite a while now, he's developed into a really first-class goalkeeper."

United could win the title as early as Monday, if they win at home to Aston Villa and City lose to Tottenham Hotspur on Sunday.

In any case, Ferguson is content with his side's form as the title race enters its decisive phase.

"It's one game away again," he said. "We've got five games left, three at home and two away. The players are showing they want to win it, there's no doubt about that." – AFP