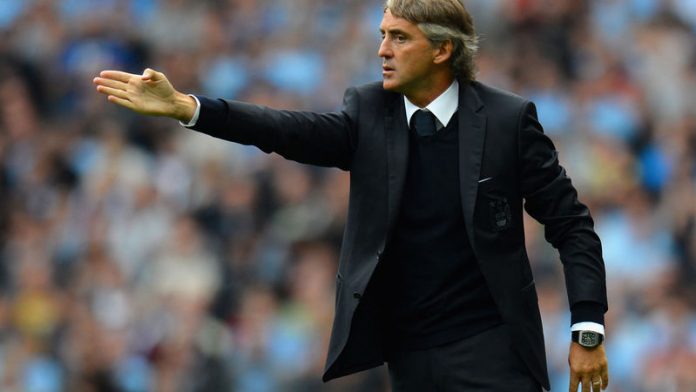 Roberto Mancini might have won the hearts of Manchester City fans with the trophies, sense of humour and immaculately knotted scarf but the often harsh management style of the sacked Italian may not be missed by some of the players.

Mounting media speculation that the City manager was about to be shown the door after three-and-a-half years at the club finally became reality on Monday when the club announced Mancini had been relieved of his duties.

A year to the day after he leapt up and down to celebrate Sergio Aguero's last-gasp goal that snatched a first title in 44 years from Manchester United on goal difference, he slips away two matches before the end of the season.

The supporters who sing: "He comes from Italy to manage Man City, Mancini, Mancini", will miss the temperamental boss who ended their 35-year wait for a trophy by leading them to the 2011 FA Cup.

From the frantic gesticulations on the touchline to the wild goal celebrations at odds with his neat, tailored clothes, Mancini became a popular figure among City fans.

Dressing room unrest
The club's statement announcing his departure, however, referred to the need for a "holistic approach to all aspects of football at the club" which perhaps points to some of the more divisive aspects of Mancini's time at the club.

Not one to hold back in criticising those he sees responsible for failures, he had no problem publicly berating his players after below-par performances.

He once barked: "Joe Hart should stay in goal and make saves. If anyone should criticise the team it should be me, not Joe Hart. I am the judge, not Joe Hart."

There were often media reports of dressing room unrest as Mancini laid into a succession of players.

"I would like to give him a punch," he said of Samir Nasri at the end of March. "Because a player like him should play like today always. Always. Every game."

He criticised captain Vincent Kompany for choosing to play for Belgium soon after recovering from a calf problem, while he told Micah Richards he could stay on the bench if he could not adapt to the tactics he was critical of.

Turblent relationship
Mancini was widely praised for his approach to the biggest fall-out of all – with Carlos Tevez in 2011 after the Argentine refused to warm up during a Champions League game at Bayern Munich.

He told Tevez he would never play for the club again and the striker was fined and suspended after returning to his homeland without permission. The Argentine eventually came back and returned to the team.

United manager Alex Ferguson was among those to say Mancini deserved credit for the way he had handled the situation but critics would argue that a manager like Ferguson would never have even let the incident happen in the first place.

His other headline-grabbing turbulent relationship was with striker Mario Balotelli.

Oscillating between the attitude of an indulgent parent towards the temperamental Balotelli and someone whose patience had been tried too many times, Mancini gave up on trying to manage him when the club sold him to AC Milan in January.

Even the City hierarchy did not escape Mancini's tongue as he slammed the club last weekend for failing to deal with the rumours regarding his future.

Arrest Tevez
Despite the fall-outs, Mancini often showed a dry sense of humour that he managed to draw on even in the most difficult of circumstances.

When Tevez scored a hat-trick after being arrested on a driving charge, he quipped: "If it has an effect on him I hope that the police can stop him every day."

At news conferences he has donned a red nose, a mask depicting his assistant David Platt and cracked many jokes about having to answer questions on Balotelli or Tevez week in week out.

His English gradually improved, although he always spoke with a translator by his side just in case, but he nevertheless had a habit of repeating the same stock phrases whatever the event.

"It is difficult … it is important … it is normal … Anything can happen," were among his most regular utterances.

They are words that perhaps best sum up his time at City. – Reuters