Now is the time for SA and Nigeria 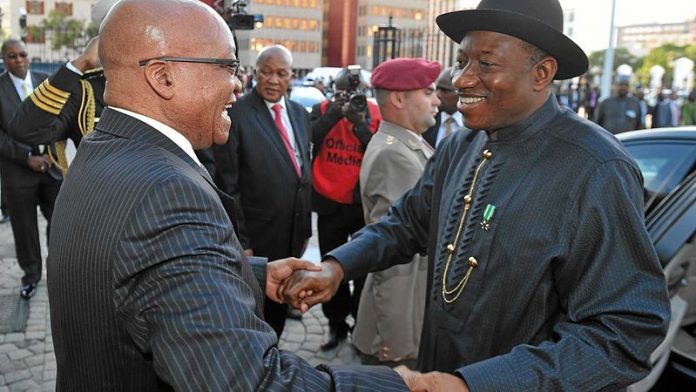 The 160-million strong Nigerian market is seen as South Africa's biggest competitor on the continent, and is set to overtake its southern neighbour as the largest African economy by 2020.

It is also one of the biggest opportunities for South African companies looking to expand into the continent &ndash; if they are willing to brave some very serious challenges, and to think innovatively about how they do ­business, according to ­analysts and trade experts.

Despite these problems, the recent state visits between presidents Jacob Zuma and Goodluck Jonathan ­herald a smoothing of diplomatic ties between the countries, which will serve to prop up their existing and steadily growing commercial ties.

Standard Bank research analyst Simon Freemantle said that trade figures with Nigeria are misleading because, when stripped of crude oil, trade between South Africa and Nigeria is very low.

Established ties with major developed countries
The West African country has more established ties with major developed countries and regions such as the United States and Europe. Nigeria's low-end consumer market is fed largely by China, Freemantle said, with Nigerian traders using complex trade networks through ports in countries such as neighbouring Togo to import cheap consumer goods from Chinese trade hubs such as Guangzhou.

These issues, as well as infrastructure challenges in transport and energy, and difficulties in trade arrangements including visa regimes have contributed to a "lack of prioritisation" of Nigeria by South African exporters, he said.

Instead, South African companies have focused their energy on the Southern African Development Community region, with 90% of local exports destined for this part of the continent.

The Nigerian economy is driven by oil, which makes up 85% of the county's exports. There is, however, much untapped potential in its agricultural sector, said Freemantle, which "has chronically under­performed over many decades".

Freemantle said that the country wants to turn this around. This movement will be driven by the need to provide its people with food security, and not with a view to export agricultural products.

The recent visits between Zuma and Jonathan have been "tremendously positive", he said. "What is important is the symbolic thawing of diplomatic tensions and what this means for the attitude to South African businesses in Nigeria."

Following the visit by Jonathan to South Africa, it was announced that a three-year visa regime aimed at facilitating travel between the two countries would be put into place. Relations were seen to be at their worst when Nigeria opposed South Africa's bid to have Nkosazana Dlamini-Zuma elected as head of the African Union last year.

Work to mend these bridges is in South Africa's national interest &ndash; there are more than 100 South African companies in Nigeria. Nigeria is looking to South Africa's automotive industry as a potential model to establish its own sector. It has little in the way of a motor industry and most vehicles are imported, including second-hand cars.

Automotive assembly capability may be easier to establish than a fully fledged automotive manufacturing sector, said Freemantle, and this will likely come with certain conditions from manufacturers, such as preferential access to the Nigerian market.

Before this can happen, however, critical factors need to be dealt with, the most important of which is the need for electricity. To increase capacity, the government is undertaking a major power privatisation drive that, if successful, could double the country's generation ability. But this would still be inadequate in a country of 160-million people and for the needs of major sectors such as the oil industry.

On the other hand, the economy holds a number of positive factors that would attract investors, including a very large market and a workforce that is affordable and ­relatively reliable, he said. "The dynamism of Nigeria's informal market provides evidence of the dormant human capital potential in the country."

In need of a more profile
Provincial trade development organisations in South Africa are increasingly looking to Nigeria, along with other West African countries, to grow local exports.

"Nigeria needs more of a profile than it is getting," said Nils Flaatten, chief executive of Wesgro, the Western Cape's investment and trade promotion agency.

"Western Cape and South African businesses don't understand the opportunities of the Nigerian market," he said, but Wesgro was working to raise awareness among local businesses of what the country could offer South African enterprises.

The agency estimated that, in 2011, 70% of the foreign direct investment from South Africa to the rest of the continent came from Cape Town, predominantly in financial services, property and the hotel industry. There was a great deal of opportunity to export further services to the Nigerian market such as business process outsourcing (call centres), marketing, as well agribusiness and technology services.

Challenges remained, however, including the often cited difficulty in acquiring visas and other travel documents, Flaatten said. The lack of a direct flight from South Africa to Nigeria was another obstacle. Despite the low inter-trade figures between the countries, South Africa is a very active foreign direct investor into Nigeria.

Research by Standard Bank shows that, by 2010, 20% of South Africa's total private investment stock on the continent was held in Nigeria and, by 2012, 30 of South Africa's most prominent firms had a physical presence in that country. A shining example of this is telecoms giant MTN.

Wholesale and retail trade
South Africa's investment profile in Nigeria is across a variety of industries, Standard Bank noted. About 25% of businesses were engaged in wholesale and retail trade, including Shoprite, Massmart and Pep; 22% in financial and business support services through the likes of Standard Bank and the First Rand Group; 16% in manufacturing, including Nampak and AECI; 13% in telecommunications; 13% in travel and leisure through companies such as Protea Hotels and Sun International; and 10% in construction through Group Five and Basil Read.

According to data provided by Wesgro, outward investment into Nigeria has also come from retail companies such as Woolworths and the Foschini Group, both of which have invested just under R350-million into Nigeria, as well as educational software firm Learning Curve, which invested R63-million.

Dianna Games, honorary chief executive of the South Africa-Nigeria Chamber of Commerce, said the ­largest Nigerian investment into South Africa so far remains the investment of the Dangote Group. It invested more than R1-billion into Sephaku Cement.

But this "masks the vibrancy of the business relationships", she said. "Many companies are coming here to seek partners, funding, skills training, business models and a variety of other things. There is a lot of Nigerian money in high-end property and other assets, but much of this is done on an individual basis."

Robust economic ties
There are also many small and medium businesses in South Africa that are owned by Nigerians, said Games, and two of their big banks &ndash; including First Bank of Nigeria &ndash; have representative offices here.

The economic ties between Nigeria and South Africa have proved robust in spite of the "diplomatic hiccups", said Oladiran Bello, head of the governance of Africa's resources programme at the South African Institute of International Affairs.

South African companies face competition for this market from Nigerian and other international firms, but the economy was large and diverse enough for South African companies wanting to expand, he said. There is a sufficient segment of the market able to afford products aimed at both middle-income and high-end consumers.

But companies have to modify their operations to suit the Nigerian market because of the infrastructure and energy constraints. Bello uses Shoprite, which operates five stores in Nigeria, as an example. Lacking extensive space to store and stock produce, the retailer invested in transport infrastructure, which has allowed it to ship in more goods on a daily basis. Although the country's power shortages and ongoing unrest in the northeast is worrying, Nigeria has exhibited "imbued resilience" to these problems, sustaining its upward growth trajectory, he said.

It was likely that if it could successfully complete the overhaul of its electricity architecture and contain the religious violence, it could see double-digit growth, Bello said.

Moody's adds cautionary note to upbeat whirl
Despite Nigeria's positive growth story &ndash; it has managed to sustain economic growth of between 6% and 8% over the past decade &ndash; ­economic vulnerabilities remain.

In a report released this week, ratings agency Moody's highlights some of the challenges that still face the continent's most populous country, including "opaque economic policymaking", high ­corruption levels and "limited willingness and capacity to execute critical structural reforms". About 65% to 70% of the government's revenue is generated by oil, leaving it vulnerable to volatility.

The nationwide Islamist insurgency and other militant activity represent further risks to the country's creditworthiness. The agency did not believe that social unrest could destabilise the government, but political risks were amplified by the combination of rising poverty and inequality, entrenched religious and ethnic tensions, and extraordinary levels of corruption.

Nigeria does have some very positive factors going for it aside from its size &ndash; government debt is at a comparatively low 20% of gross domestic product, and it has attracted high levels of ­foreign direct investment compared to many of its peers. However, Moody's says its chronic infrastructure deficit "weighs on productivity and competitiveness". Its growth is also offset by the high unemployment rate of about 24%.