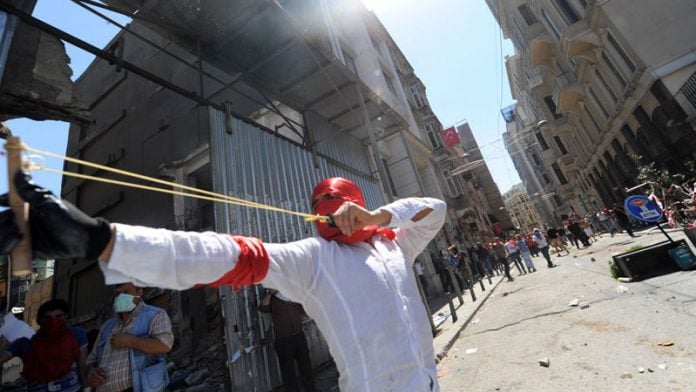 Police officers retreated from Taksim Square on Saturday, taking away barricades and allowing in tens of thousands of protesters in an apparent move to end tensions from two days of anti-government protests.

Some protesters hurled objects at withdrawing officers and police vehicles, prompting officers to fire several rounds of tear gas to push back the crowds and resumed pulling out of Taksim Square, the private Dogan news agency reported.

Earlier, Prime Minister Recep Tayyip Erdogan called on demonstrators to end their protest, but remained defiant. He said the government would press ahead with the redevelopment plans at Taksim that sparked the demonstrations.

In a televised speech, Erdogan said police may have used tear gas excessively while confronting protesters and said this would be investigated. But he said the protesters didn't represent the majority and accused them of raising tensions.

Protest against Erdogan
The protests grew out of anger after Friday's heavy-handed police tactics to break up a peaceful sit-in by people trying to protect a park in Taksim Square from government plans to revamp the area. Officials say the plans include building a shopping mall and the reconstruction of a former Ottoman army barracks.

The park demonstration turned into a wider protest against Erdogan – who is seen as becoming increasingly authoritarian – and spread to other Turkish cities despite the court decision to temporarily halt the demolition of the park. A human rights group said hundreds of people were injured in scuffles with police that lasted through the night.

At Taksim, protesters chanted slogans against Erdogan's government and called on him to resign.

In the capital, Ankara, police clashed with protesters who gathered at a park close to Erdogan's office. – Sapa-AP