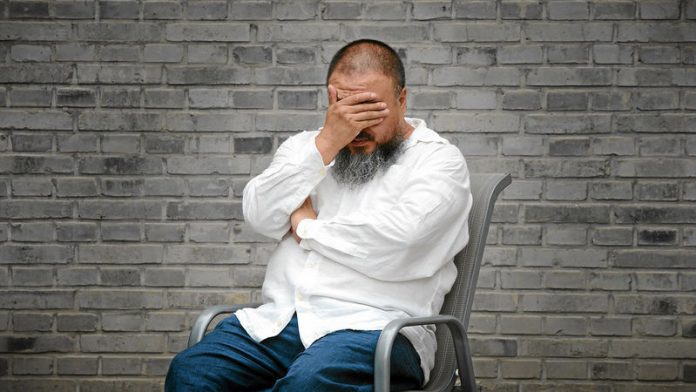 To some, he is verging on a saint and martyr, singlehandedly standing against the forces of Chinese political repression. For others he is a canny manipulator, utterly in control of his reputation and place in the art world and market. For others still, he is all these things: an artist who outdoes even Andy Warhol in his ubiquity, his nimbleness at self-promotion and his use of every medium at his disposal to promulgate his work and his activism.

Whatever your views on the Chinese artist Ai Weiwei, one thing is clear: he is everywhere. From the Hampstead Theatre in London, where Howard Brenton's play about the 81 days Ai spent in detention in 2011 is underway, to the web, where his video for his heavy-metal song Dumbass is circulating, and the Venice Biennale, where not one but three of his large-scale works are on display – perhaps the most exposure for any single artist at the international festival.

One of the works, Bang, a forest of hundreds of tangled wooden stools, is the most prominent piece in the German national pavilion. Then, in the Zuecca Project Space on the island of Giudecca, is his installation Straight: 150 tons of crushed rebar from schools flattened in the Sichuan earthquake of 2008, recovered by the artist and his team, who bought the crumpled steel rods as scrap before painstakingly straightening them and piling them up in a wave-like sculptural arrangement.

By far the most revealing about Ai's own experience, though, is the third piece, SACRED. Situated in the church of Sant'Antonin, it consists of six large iron boxes, into which visitors can peek to see sculptures recreating scenes from the artist's detention. Here is a miniature Ai being interrogated; here a miniature Ai showers or sits on the lavatory while two uniformed guards stand over him. Other scenes show him sleeping and eating – always in the same tiny space, always under double guard. The music video refers to some of these scenes with a lightly satirical tone that is absent from the sculpture.

Therapy or exorcism
According to Greg Hilty of London's Lisson Gallery, under whose auspices SACRED is being shown, and who saw Ai in China a week ago, the work is a form of "therapy or exorcism – it was something he had to get out. It is an experience that we might see as newsworthy, but for him, he was the one in it".

The uncanny hyperreality of the installation speaks of the fact that, according to the project's curator, Maurizio Bortolotti, "the experience made him fix all the details like a nightmare". For 81 days, said Hilty, he had nothing to do (aside from his periods being questioned) but memorise the minutest details of the tiny, featureless room in which he was kept. The outside of the metal boxes is entirely blank – Ai was brought there hooded. The only detail of the cell's exterior he observed was on his release, when he saw the number on the door: 1135.

The ecclesiastical setting, the title of the work, the appearance of the metal crates (which might resemble a reliquary or saint's coffin) suggest that Ai is positioning himself as a martyr. According to Hilty, however, "He is not pretending to be a saint, but the setting does suggest things such as the stations of the cross, or the temptations of St Anthony, to whom the church is dedicated. But these are human, universal things that go beyond Ai Weiwei … he's not saying he's a saint, or that he is wholly right or good. He's just being honest.

"There is a reflex among art world people that if he is strong as an activist you can't see him as an artist," Hilty added. "But Ai shows a remarkable knack for working in different registers."

The sculpture at the Venice Biennale should be seen as entirely different from the pop video, the blogging, the activism and the rest, Hilty suggested. "He could be dismissed as a polemicist, an activist. But I hope people see these works and recognise that he can do all that and also step back and make art with profundity." – © Guardian News and Media 2013