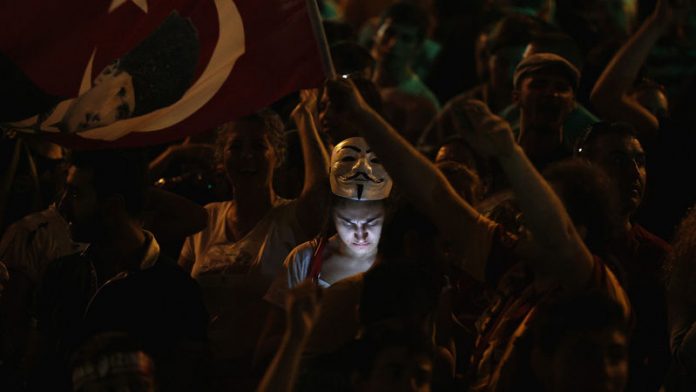 Huseyin Celik, deputy chairperson of the Justice and Development (AK) Party founded by Erdogan just over a decade ago, said local and presidential elections would be held next year as planned, and a general election in 2015.

"The government is running like clockwork. There is nothing that necessitates early elections," he told reporters after a meeting of the party's executive committee in Istanbul.

"The world is dealing with an economic crisis and things are going well in Turkey. Elections are not held because people are marching on the streets."

A few kilometres away, tens of thousands of Turks defied Erdogan's call on Friday for an immediate end to anti-government demonstrations, massing again in the central Taksim Square, where riot police backed by helicopters and armoured vehicles first clashed with protesters a week ago.

Tourists and curious locals swelled their numbers around a makeshift protest camp in Gezi Park, a leafy corner of the square where activists have been sleeping in tents and vandalised buses, or wrapped in blankets under plane trees.

Senior AK officials said they had discussed calling a rally of their supporters in Istanbul or Ankara next week but no decision had yet been taken, with some party figures urging restraint for fear of provoking the situation on the streets.

What began as a campaign against government plans to build over the park spiralled into an unprecedented display of public anger over the perceived authoritarianism of Erdogan and his Islamist-rooted AK Party, leading to the worst riots in decades.

In a rare show of unity, thousands of fans from Istanbul's three main football clubs Besiktas, Galatasaray and Fenerbahce, who have helped organise some of the protests, marched on Taksim roaring "Tayyip resign!" and "Arm in arm against fascism!".

Police fired teargas and water cannon in the Kizilay district of central Ankara late on Saturday to try to disperse protesters blocking roads and burning bonfires in the streets.

There were similar scenes overnight in Istanbul's working-class Gazi neighbourhood, which saw heavy clashes with police in the 1990s. Three people have been killed and close to 5 000 injured around the country since the violence began a week ago.

Erdogan has given no indication of plans to clear out Taksim, around which protesters have built dozens of barricades made of ripped up paving stones, street signs, vandalised vehicles and corrugated iron, clogging part of the city centre.

Police pulled back from the square days ago.

"Let them attack. They can't stop us," a member of the Turkish Communist Party shouted through loudspeakers to a cheering crowd from on top of a white van in the square.

Taksim is lined by luxury hotels that should be doing a roaring trade as the summer season starts in one of the world's most-visited cities. But a forced eviction might trigger a repeat of the clashes seen earlier in the week.

The gatherings mark a challenge to a leader whose authority is built upon three successive election victories. Erdogan takes the protests as a personal affront.

"Turkey is a democracy and it will prove its inner disposition in the face of these protests," German Foreign Minister Guido Westerwelle told Germany's Welt am Sonntag.

"Prime Minister Erdogan has a special responsibility to calm the situation and he has to be aware of that," he said.

Sources close to the AK Party speak of a sense of siege within the party leadership, with influential if disparate forces loath to break ranks publicly but worried about the extent of Erdogan's power and his uncompromising stance.

Erdogan has made little secret of his ambition to run for the presidency after his third term as prime minister comes to an end, although the AK Party could also change internal rules to allow him to stand for a fourth term.

Celik said the protests had been discussed "in detail" at Saturday's party meeting, but that the question of early elections had never been on the agenda.

"A government that doesn't have people's trust cannot be permanent. We got the message of the protests and we respect that, but there's nothing to respect about people throwing stones," he said.

Erdogan has made clear he has no intention of stepping aside — pointing to the AK Party's 50% of the vote in the last election — and has no clear rivals inside the party or out.

He has enacted many democratic reforms, taming a military that toppled four governments in four decades, starting entry talks with the European Union and forging peace talks with Kurdish rebels to end a three-decade-old war.

But in recent years, critics say his style, always forceful and emotional, has become authoritarian.

Media have come under pressure, opponents have been arrested over alleged coup plots, and moves such as restrictions on alcohol sales have unsettled secular middle-class Turks who are sensitive to any encroachment of religion on their daily lives.

"These protests are partly a result of his success in economic and social transformation. There's a new generation who doesn't want to be bullied by the prime minister and who is afraid their lifestyle is in danger," said Joost Lagendijk, a former European parliamentarian and Istanbul-based academic. – Reuters