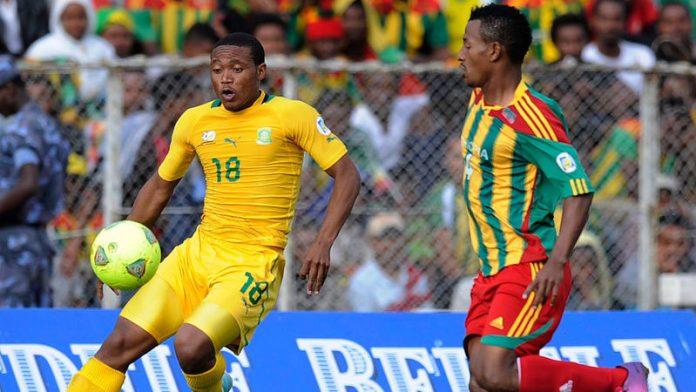 Bafana Bafana coach Gordon Igesund says his charges could not have done more to beat Ethiopia, with their 2014 World Cup hopes now reliant on disciplinary procedures against the group leaders.

Bafana lost 2-1 to Ethiopia in Addis Ababa on Sunday after Bernard Parker took the lead for the South Africans in the first period, before the hosts equalised just before the break.

Parker went from hero to villain in the 70th minute, when his headed clearance of an Ethiopian free kick went horribly wrong as the ball rocketed into the top corner of the net for an own-goal, giving Ethiopia victory.

"Anybody watching the game will know that South Africa played with their hearts and gave everything they had," Igesund said.

"We went for it and we tried to get the equaliser but, at the end of the day, Ethiopia won the game.

"Having said that, we couldn't do more than we did. We took the game to them in all the departments."

While Ethiopia drew five points clear at the top of Group A, seemingly securing their place in the third and final round of African qualifying, Fifa announced later on Sunday the door might still be open for Bafana.

Ineligible player
The global governing body said Ethiopia were alleged to have fielded an ineligible player in their 2-1 victory over Botswana on June 8, and disciplinary proceedings had been opened.

If Ethiopia were found guilty, they could lose their three points from that match, which could then be given to Botswana.

Should that happen, Ethiopia would still be top of the standings, but only two points ahead of South Africa, while Bafana would be one point above Botswana, with all three teams remaining in the hunt for a place in the next round.

While they could be handed a lifeline in the qualifying competition, Igesund believed his side were unlucky in their match at the weekend.

"In the first half we had one or two good chances and then a ball comes in and Bernard Parker scores an accidental, miracle [own] goal."

Igesund admitted expectations may have been too high for Bafana to beat the log leaders away from home.

"Obviously we are disappointed but maybe it was a hurdle just too high for us," he said.

"I wish we could have gone into the half-time break 1-0 up, but take nothing away from them. There has to be a winner and it was them today.

"Nothing went wrong with us, we gave everything we had, but it wasn't our day."

"We gave it our all and you can't ask for more than what we gave. Things didn't go our way."

"I hope people from back home saw what was happening here. Their goalkeeper kept going down, their ball boys kept throwing the balls away from the goalkeeper.

"For me, when we are playing at home, when I do that I get criticised from our own supporters."

South Africa, who arrive back in Johannesburg on Monday afternoon, face Botswana in their final match of the second qualifying round at home in September. – Sapa