Gambia: Paradise grins its atrocities away 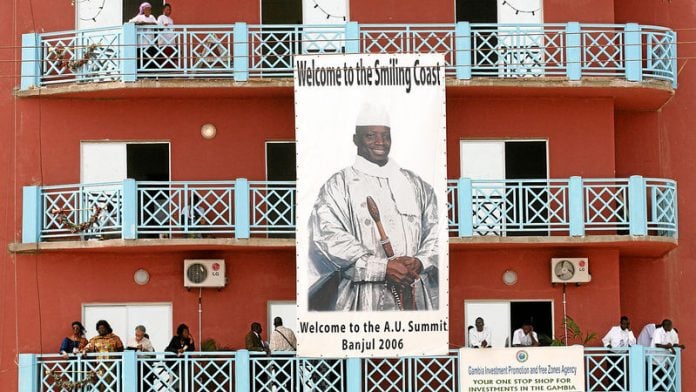 Tens of thousands of winter sun-seekers flock to mainland Africa's smallest country every year, drawn by its stunning beaches, bird-watching and haunting kora music. As the Arab Spring pushes holidaymakers from North African hot spots – Egypt, Morocco and Tunisia – Gambian tour operators say bookings have increased. But beneath the package holiday gloss is the acute paranoia of one of Africa's worst police states.

"Gambia is not a military dictatorship, but nobody likes to mention the president's name," said a tour guide, who agreed to speak only during a canoe trip, far from earshot. "Tourism has brought jobs, but we cannot even discuss improving the sector."

Since taking power in a bloodless coup in 1994, President Yahya Jammeh has swapped army fatigues for a white gown and sceptre, and rules through a potent mix of state brutality and mysticism, claiming to cure a long list of maladies from Aids to erectile dysfunction.

Enfolded by Senegal, which is one of Africa's most successful democracies, the Gambia has one of the continent's worst human rights records.

Tourism has become an economic lifeline under the regime of a president who urges "every Gambian to be a policeman".

After years holidaying in Tunisia, Emma, a housewife in her 50s from Gloucestershire, England, chose the Gambia as an alternative this year. "The only thing I know about the president is his portrait is absolutely everywhere, isn't it? But I'd recommend this place to anyone, you're absolutely safe here," she added, sipping a cocktail as peacocks strolled past her hotel pool.

Many of the Gambia's 1.7-million citizens face a much darker reality.

Activist and former minister Amadou Scattred Janneh was sentenced to life imprisonment for distributing T-shirts at a rally. He shares a cell with a 24-year-old jailed for creating an online social media profile using the president's name.

Janneh said that in November he saw nine prisoners apparently randomly executed by firing squad. "It was very traumatic. No one knew what criteria they used," he said. "One person had already served their term, another had been in jail for eight months, another for 27 years."

A spokesperson for the European Union, which has earmarked €76-million in development aid to the Gambia for the 2008-2013 period, said it had cut funding by 20% following "concerns" about human rights.

Jammeh's secret police, disguised as everything from gigolos to street hawkers, have arrested people for reacting "indifferently" when his presidential convoy passes.

Janneh said that one day Gambians will have had enough. "Gambia will not have anything like the Tunisia or Libya uprisings, but there's a real possibility of violent upheaval." – © Guardian News & Media 2013