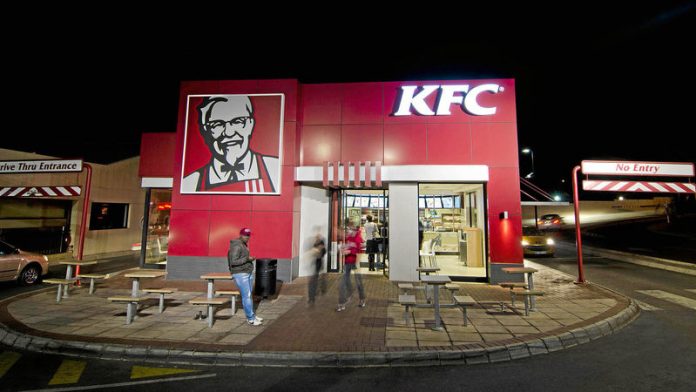 'Two KFC's open in China each and every day," says Doug Smart, KFC's general manager for Africa, as he munches on a cheesy BBQ Twister. "In a train station in Shanghai … I counted six KFCs."

In China, there are currently 790 KFC stores. In South Africa, another big market for the brand, there are 701. Already, almost 50 stores have been built locally this year and by the end of 2013, there will probably be 800 in total.

KFC, which operates through Yum Restaurants International, already has a presence in 120 countries around the world and is seeking growth — and doing so successfully — in emerging markets. "Each country comes with different and unique challenges," Smart says.

One such challenge in South Africa could be substantial tariff increases. Local chicken farmers have long complained about their inability to compete with a flood of imports and the South African Poultry Association has proposed that the government increase import tariffs (from 27% to a maximum of 82%) to protect the industry, creating concern that it would send the price of chicken sky high.

Although KFC sources its product only from local producers, Smart says the quick-serve restaurant chain is opposed to the tariff increase.

"We very much support the local industry. We know they have been suffering, but at the same time, we don't support the tariffs."

Because KFC does not use imported chicken, it is limited by local producers' ability to supply chicken wings.

For this reason, it does not market products like its Zinger wings aggressively, despite the sale of the product growing by 25% this year and last.

The franchise also does not import wings because associated costs, like transport, make it impractical.

Smart says it is the idea of a blanket tariff that they are opposed to, and even though they would like to see things improve for their poultry producing partners, they do not want an answer which affects broad-based supply.

Asked if KFC would consider trying its hand at farming, Smart says the Ecuador KFC does indeed do some of its own processing, but, "our expertise is in quick-serve restaurants and poultry is a very specialised industry … While owning upstream would protect us from some risks, it would expose us to a lot more."

Buns in the oven
The success of each and every KFC is paramount, so the decision to open a new one is never taken lightly. The process of finding a site involves the mapping of every town in South Africa, looking for possible locations.

"Typically, we are looking for generators: banks, liquor stores, parking … but many developers also see us as a generator."

The brand closes about one to four stores a year for various reasons, but "I can't recall one where the business just failed," Smart says.

While Africa is lauded as the next frontier for growth, KFC's tally in the rest of Africa is not as impressive as it is in South Africa or China, with just 70 stores on the rest of the continent, Nigeria being the biggest with 18.

The reason for this is that African countries require a lot more groundwork and the challenges can be as basic and as dire as sourcing chicken, and items like buns, lettuce and tomatoes.

As a result, the fast-food giant often teams up with local partners to smooth the way forward. Smart says that while KFC is seeking growth, it seeks quality growth on the continent and is at "that difficult stage" of setting up supply chains.

When it comes to new entrants into the South African market, like Burger King, Smart says it simply serves to lift everyone's game.

"If we find something someone is doing well, we watch closely and apply it, times 700 … Since Burger King opened [with one store in Cape Town] we have opened between 40 and 50 stores this year."

Types of ownership differ around the world. In some countries, KFCs are franchised only and in others, like South Africa, there is mixed ownership. In China, for example, all the stores are owned by KFC itself, helping stores to pop up quicker.

"The quickest way to grow is to do it ourselves," says Kerr.

Season to taste
But it's not just the ownership model that is adapted to suit each market, the ingredients are too.

Although the colonel's original recipe for fried chicken is produced identically in all KFC's around the world, and the recipe remains a closely guarded secret (only one KFC employee in South Africa knows it), other aspects of a KFC meal do vary from country to country.

Just as South African stores offer pap as a side dish, in Asia, kanjii, a rice-based cereal, is often found instead. In Thailand, 20% of all meals are ordered with rice.

"In India, there is a product called fiery grilled. But [it is so hot] most of us can't eat it," Smart says.

The KFC double-down, a limited-offer product, was born in the United States and originally made with bacon.

But bacon is an ingredient that is often adapted out of many such recipes in South Africa, not with halaal specifically in mind, Smart says, but because the market has simply just "grown that way".

There are other factors which come into play. Some chickens are wheat-fed, others corn-fed. Frying in palm oil will produce a different taste from frying with sunflower or canola oil.

The country with the highest KFC sales is France — the home of haute cuisine. But where might one find the best KFC? In Smart and Kerr's experience, South African chicken is the best.

"When my family from the to United Kingdom visit, the first thing they want to do is get KFC here," Smart says. "Our poultry partners are really good, better than many in the world."

Well-oiled
The back end of the KFC in Emmarentia, Johannesburg, may not be what the consumer expects.

As Smart puts it: "There is so much more to getting the product right than what is in the sachet."

The kitchen, at lunch time on a Tuesday, is a well-oiled machine. The staff, 23 000 of which the KFC system employs country-wide, work quickly and methodically.

KFC's food and safety standards are some of the highest in the food industry. Suppliers are required to undergo and pass a Yum! supplier tracking, assessment and recognition audit in order to supply to KFC. And this supplier approval process has a reputation for being one of the most challenging and thorough in the industry.

"We buy chicken from the same places you buy from. It's exactly the same as what goes to the supermarket," says Smart, While KFC purchases its poultry from local suppliers like Rainbow Chickens and Supreme Poultry, the franchise requires a standard weight and quality. Similar weight means that, for example, four thighs from different, but similarly sized chickens, will cook together in the same time period.

The rule in any KFC store is that a meal may be served up to 90 minutes after being produced, thereafter it must be thrown out. Kerr is responsible for ensuring that as little as possible is wasted and sales are monitored by the half hour in order to predict what is needed.

But Kerr says the South African market is extremely seasonal. On pay day, the 25th and 30th of each month, in particular, business can rise 60% or more over the previous week.

"So, it's imperative that we have enough food, but we also can't have too much. We don't want to be in the business of throwing away food."

Every KFC store is audited unannounced five times a year to ensure they are following the strictest health and safety procedures and mystery shoppers are sent to each KFC store 26 times a year to check that standards are being met.