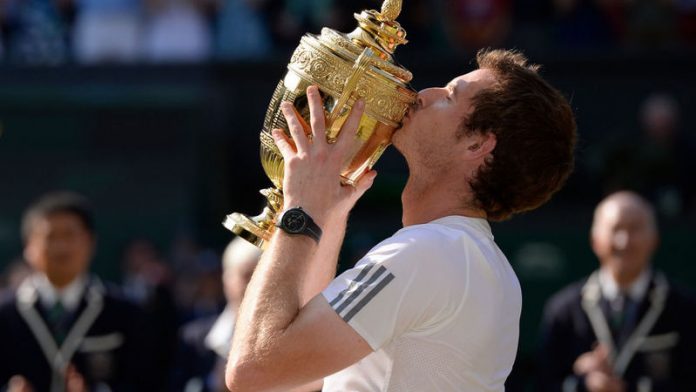 The 26-year-old on Sunday became the country's first male winner since Fred Perry in 1936, the year the Spanish Civil War started, Jesse Owens defied Hitler at the Berlin Olympics and Gone With The Wind was published.

It was Murray's second Grand Slam title to follow his breakthrough triumph at the US Open in 2012, which followed his Olympic gold medal as well as a heartbreaking, tearful loss to Roger Federer in the Wimbledon final.

However, Sunday's title showdown at the All England Club, between two men who have now contested three of the last four Grand Slam finals, rarely lived up to expectations.

Both struggled in the stifling 40-degree heat and the top-seeded Serb, who beat Murray in the Australian Open final in January, looked jaded after his record four hour and 43-minute semifinal victory over Juan Martín del Potro.

And despite leads of 4-1 in the second set and 4-2 in the third, he was out-hit by Murray who finished with 36 winners to 31, with 21 unforced errors to the Serb's 40 and having carved out 17 break points.

Inside a baking Centre Court, and watched by Victoria Beckham, Wayne Rooney as well as Hollywood stars Gerard Butler and Bradley Cooper, the first point of the match was a punishing 20 strokes.

Murray, who has played in the final of his last four majors, had break points in the first and third games, with the Scot finally pouncing on his seventh for a 2-1 lead.

Murray was more aggressive
Djokovic levelled at 2-2 but Murray was the more aggressive, positive man and broke to love for a 4-3 edge firing almost four times as many winners than the top-seeded Serb.

Murray saved three break points for a 5-3 lead but Djokovic was furious that umpire Mohamed Lahyani had called a ball out at 30-40 while allowing play to continue with the Scot going to deuce.

The British second seed took the opener 6-4 after 59 minutes with a love service game, having hit 17 winners to six and with only six unforced errors to the world No. 1's 17.

Murray wasn't getting complacent – he had won the first set of the pair's last three meetings and still lost the match.

Djokovic was obviously aware of the history, speeding into a 4-1 lead with two more marathon rallies of 30 and 32 shots.

But Murray roared back to 4-4 in a final which, despite its punishing hitting, still felt flat with both players too similar in style and then appearance when they both donned white caps to combat the sun's glare.

Djokovic, however, was becoming increasingly frustrated with Lahyani, the court on which he kept slipping, as well as his own poor judgement, which left him without challenges as the set progressed.

Djokovic was broken
In his fog of anxiety, Murray mugged him for a break to lead 6-5 and went two sets to the good at 7-5.

Murray had only lost once when two sets up and that was in the Wimbledon third round in 2005 against David Nalbandian, his debut year when he was a rookie 18-year-old.

A break in the second game of the third set gave Murray a 2-0 lead before Djokovic, having discarded the hat, raced away with the next four games for a 4-2 lead.

But terrier Murray reclaimed the break in the seventh game and levelled in the eighth with a running, curled forehand off a Djokovic drop.

It was almost over.

Djokovic, in his 11th Grand Slam final, was broken for 4-5 before the British star, with the crowd on their feet, wasted three match points.

He finally achieved his place in history when Djokovic netted a backhand after three hours and nine minutes of action. – AFP

At the ANC’s manifesto launch, Cyril Ramaphosa promised to reduce unemployment, increase social security, and stamp out corruption in the party
Advertising