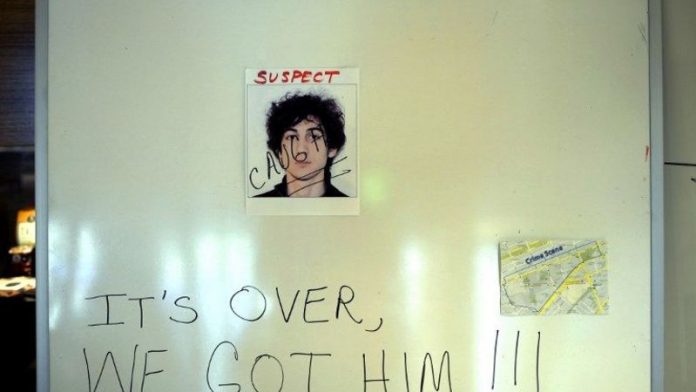 The 19-year-old Tsarnaev, making his first court appearance on Wednesday, entered the federal courtroom in Boston in handcuffs, shackles and wearing an orange jumpsuit.

"Not guilty," the 19-year-old Chechnya-born US citizen, said repeatedly as the 30 counts were read out at the arraignment, which lasted seven minutes.

The room was packed with emotional victims of the bombings at the Boston Marathon finish line, some of whom needed canes to walk.

Also in court were many journalists and a few people who identified themselves as friends of Tsarnaev, who is accused of carrying out the attacks, which left three people dead and more than 260 wounded.

Peter Payack, Tsarnaev's high school wrestling coach, was one of the first of many people turned away from the courtroom after members of the media and the public lined up hours prior in hopes of attending the hearing. He and scores of others resigned themselves to watching the arraignment on screens placed in two overflow rooms.

Tsarnaev had been a decorated athlete and wrestling team captain when he finished school two years ago.

"I wanted him to see me," the disappointed Payack, a dedicated marathon runner, said. "I was feeling that if there was any spark of humanity left in him that maybe – if he saw his old wrestling family – he would make a connection."

Seventeen of the counts against Tsarnaev are punishable by the death penalty or life imprisonment.

The attacks stunned America with scenes of carnage and chaos at one of the country's premier sporting events.

The bombs were packed with metal fragments to cause maximum damage, and several people lost one or more limbs.

Tsarnaev is accused of plotting and carrying out the attacks with his 26-year-old brother Tamerlan, who died in a shootout with police as the pair tried to escape the Boston area several days later.

He is also charged in connection with the shooting death of a campus police officer at the Massachusetts Institute of Technology during the brothers' wild overnight getaway attempt. – AFP