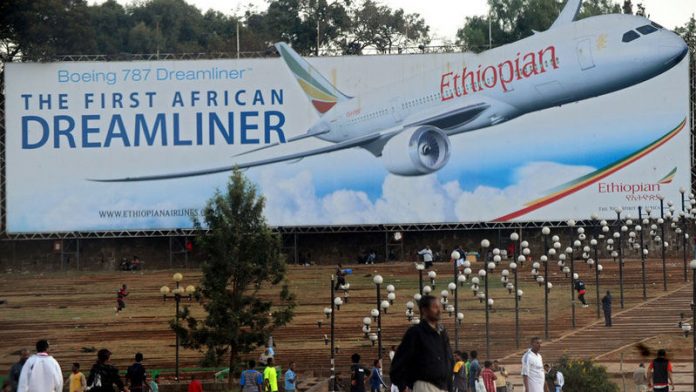 A team from Britain's Air Accident Investigation Board (AAIB) on Saturday was deployed following the blaze on Friday afternoon on the Ethiopian Airlines plane, which was fortunately empty at the time.

"The aircraft was moved to a secure hangar early this morning. The investigation is ongoing," a spokesperson for the AAIB, an agency of the department of transport, told Agence France-Presse.

The US Federal Aviation Administration said it had also sent an official to support the work of the US National Transportation Safety Board in Britain.

Ethiopian Airlines said smoke was detected coming from the plane after it had been parked at Heathrow for more than eight hours.

"The aircraft was empty when the incident was observed. The cause of the incident is under investigation by all concerned," it said in a statement.

It is a blow for Boeing, which had to temporarily withdraw the Dreamliner from service earlier this year after concerns that batteries on board could cause fires.

The US aviation giant has since rolled out modifications it said would ensure the planes were safe.

The fire caused Heathrow to shut down for 90 minutes, and the world's busiest international passenger air hub was still reporting related delays on Saturday.

"The airport is fully operational but with some flight delays and cancellations," Heathrow said in a statement.

A spokesperson told Agence France-Presse that about 40 flights had been cancelled throughout the day, largely due to aircraft being out of place, but said delays to other flights were "minimal".

In a separate incident on Friday, Britain's Thomson Airways said one of its Dreamliners flying from Manchester to Florida was forced to turn back after experiencing a "technical issue" after take-off.

Root cause of the problems
A global grounding order on the Dreamliner was issued in January after lithium-ion batteries overheated on two different jets, with one of them catching fire while the aircraft was parked.

Boeing has not been able to identify the root cause of the problems – a source of major embarrassment to the company – but said its modifications would prevent the problems reoccurring.

In April, an Ethiopian Airlines Dreamliner – reported to be the same plane that caught fire at Heathrow – flew from Addis Ababa to Nairobi on the first commercial flight since the grounding.

But the planes have been dogged by problems, with a string of flights worldwide cancelled or diverted due to mechanical issues. – AFP

Boeing seeks to exit crisis mode as it reports results