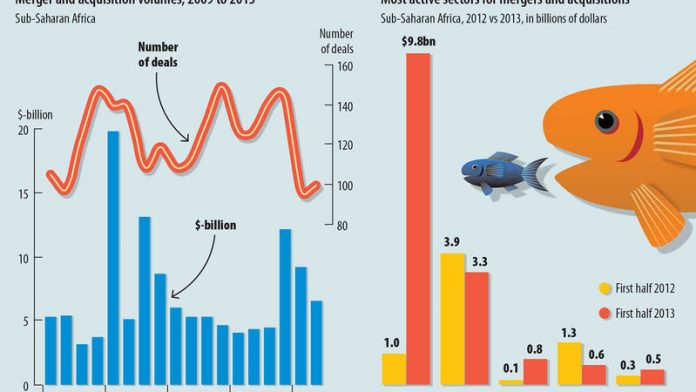 The value of mergers and acquisitions in sub-Saharan Africa has increased by 86% in the first half of this year compared with the same period last year.

It has reached a total of $15.8-billion, substantiating the notion that investor confidence in the continent remains on the rise — and South Africa plays a prominent role in this growth story.

According to the Thomson Reuters Sub-Saharan Africa Investment Banking Analysis for the first half of 2013, the value of mergers and acquisition was the highest since 2010 when their value reached $25-billion.

“[Although] it is difficult to gather inference from six months of data, it continues to tell of rising interest in Africa.”

Mergers and acquisitions activity shows how healthy an economy is and may suggest investors are overcoming their fears about political instability on the continent.

Investors bet on Africa
Nichols said investors are looking for places to put their money, and are placing bets on investment in Africa. “The more they understand Africa, the bigger those bets can be.”

However, the report did note that, although investment value was on the up, the overall transaction volume was down — 100 in the second quarter of 2013 compared with 127 in the same quarter last year, or 144 in the fourth quarter of 2012.

But although a lot of the investment value is captured in just two big deals, it still shows continued growth, Nichols said.

The most targeted nation by value in the first half of this year was Mozambique, accounting for 42% of activity because of PetroChina’s $4.2-billion acquisition of integrated energy company ENI East Africa and a US$2.5-billion offer from an undisclosed special-purpose vehicle in India for Videocon Mozambique.

China and South Africa were the most acquisitive nations, together accounting for 64% of all deals (in value) during the first half of 2013.

Keeping it at home
As far as South Africa is concerned, however, the report showed major deals involved South African companies not going outside the country’s borders but instead merging with, or acquiring, other local companies.

For example, those in the top 10 include Sibanye Gold — created as a result of Gold Fields’s unbundling earlier this year — which was acquired by shareholders.

Somer-set Mall was acquired by Hyprop Investments and Independent Newspapers by Sekunjalo Investments.

Nichols said this, too, was a positive trend. “[Our] corporations can invest in other countries, but they are choosing to invest at home.”

Bolstered by the two Mozambican oil and gas deals, energy and power were the most active sectors for mergers and acquisitions, followed by mining and healthcare.

Please note: In a previous version the Mail & Guardian erroneously said that Adcock Ingram Holdings was acquired by the Bidvest Group, when in fact the deal has lapsed. We apologise for the error.