Mandelas down to a T 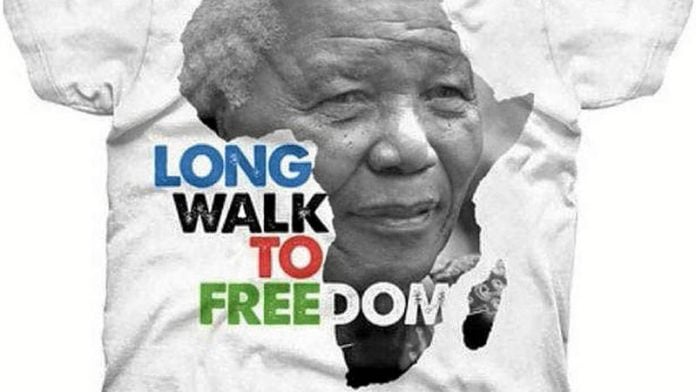 Undaunted, two of Nelson Mandela's granddaughters chose the eve of his 95th birthday to launch a collection of R299 T-shirts emblazoned with "Legend", "Revolutionary" and "Long Walk to Freedom".

Swati Dlamini and Zaziwe Dlamini-Manaway said they would be among the 30 to 40 family members visiting the former president in hospital in Pretoria on Thursday on his birthday. They said he could expect 95 cupcakes along with cards made by their children, and described his condition as "still critical but he's doing much better".

The pair, who featured in the critically mauled reality TV show Being Mandela, had posted half a dozen tweets on their joint Twitter account inviting allcomers to the launch in one of South Africa's more luxurious shopping malls. But it could not be described as a public stampede. The handful of shoppers at the Cross Trainer in Sandton were comfortably outnumbered by staff and about 20 journalists.

In a window display there were pictures with fake gold frames showing the anti-apartheid hero. One captured him beaming alongside Michael Jackson.

Swati wore two of the 14 new designs. Asked whether they were competing with the Nelson Mandela Foundation's 46664 brand – a reference to his prison number on Robben Island – she replied: "We are all trying to achieve the same objective."

She added: "We launched it around my grandfather's birthday to celebrate his legacy. My grandfather was also a lover of fashion. He became famous for his Madiba shirts."

Mandela has been described as a global brand comparable with Coca-Cola or Google.

Swati and Zaziwe, both in their 30s, denied they were trying to cash in with their Kardashians-style reality show and clothing range. Swati said: "Our grandparents have always told us that this legacy and this name also belongs to us and that we have a birthright to it, and that's essentially it."

Zaziwe said: "This is just us doing us. This is our name as well; there's nothing we can do about it. We were born into this family and it's our name: we love it, we cherish it, we respect it and we are just trying to continue our grandfather's legacy."

When Mandela was admitted to hospital on June 8 with a recurring lung infection and then slipped into a critical condition, many doubted he would see his 95th birthday. But his condition appears to have improved in recent weeks.

On Wednesday his grandson Mandla said: "The fact that my grandfather is with us to this day when doomsday people predicted his demise makes me proud of his fighting spirit, which he has demonstrated over the many years of his life." – © Guardian News & Media 2013

Mandela’s will could lead to more family squabbles