Waiting on a royal name fit for a baby prince

"We are still working on a name, so we will have that as soon as we can," William told reporters outside St Mary's Hospital in London on Tuesday.

"It is the first time we have seen him really, so we are having a proper chance to catch up."

George, James, Alexander and Louis are the bookmakers' favourites for the youngest royal, third in line to the British throne after Prince Charles and William.

The royal couple gave the world its first sight of their baby when they emerged from hospital to cheers from well-wishers and a barrage of camera flashes.

A beaming Kate posed for pictures before handing her son to William who joked that the baby had more hair than him and had inherited his wife's good looks.

The birth gave a further boost to the royal family after the celebration last year of Queen Elizabeth's 60 years on the throne and the marriage of Kate and William in 2011.

The monarchy's popularity sank to a low in the 1990s after a string of divorces and the death of William's mother, Diana. Queen Elizabeth was criticised for her response to Diana's death.

The Guardian newspaper described the turnaround as "an incredible recovery". 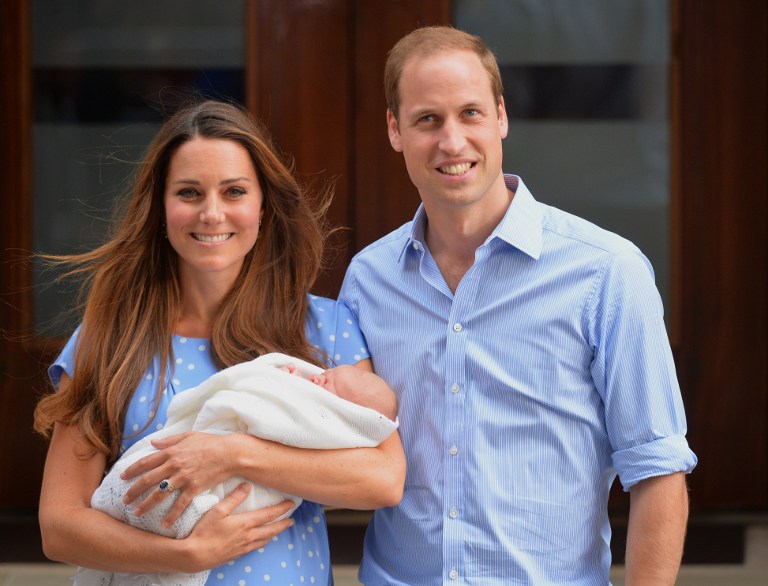 'Litttle prince'
Most British newspapers devoted their front pages to big pictures of the baby, with headlines such as "Hello World" and "Our Little Prince".

The story also received blanket coverage on many TV networks and websites around the world.

Royal precedent suggests there may be no rush to release the infant's name. It took a month for Prince Charles' name to be made public and a week for William. However, his brother Harry's name was released a day after his birth.

After weeks of fevered coverage, the couple are expected to keep a low profile. They have been living in a remote part of Wales, where William works as a rescue helicopter pilot.

They are expected to move later this year to London's Kensington Palace, William's childhood home.

Royal observers say William will shield his son from the obsessive attention that plagued his mother Diana, killed in a car crash in 1997 after her car was chased by photographers.

"William knows only too well that his baby son will be the new favourite creature in the circus he grew up in," wrote Daily Telegraph columnist Allison Pearson.

"Every plan he and Kate have put in place is to protect him." – Reuters