St Helena: A flight to the middle of nowhere 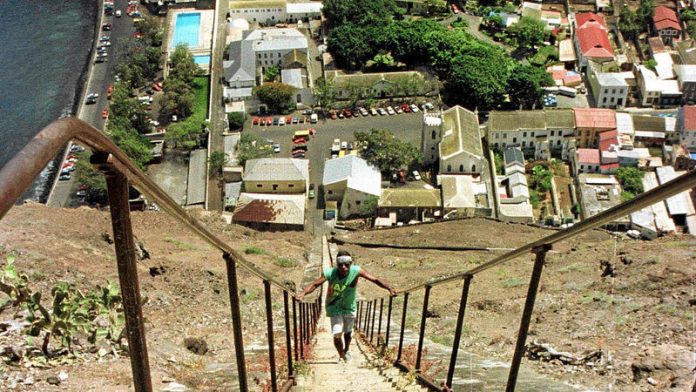 It is not easy to travel to St Helena. First, there is only one way to get there and that is by sea. Second, as a destination it is formidable. The island is a small volcanic outcrop in the middle of the South Atlantic Ocean, circumscribed by cliffs which plunge into seas of more than 4 000m deep, and it is lonely: Cape Town is a five-day sail away; Angola to the east and Brazil to the west are each close to 2000km away; Portland in Dorset is almost forgotten.

As its colonial British owners have long known, St Helena is best suited as a fortress of incarceration for upstarts most irritating to the empire. They include Napoleon Bonaparte and Dinuzulu kaCetshwayo and about 6 000 Boer prisoners of war. St Helena is "further from anywhere than anywhere else in the world", is how the writer Julia Blackburn once described it.

Until 1502, when the Portuguese seafarer João da Nova was said to have discovered it, it was uninhabited. Its population peaked at 9 850 (in 1901, when the Boer prisoners were there), though it has been in steady decline to today's 3 800, expats not included.

But all that is about to change. The island, Britain's oldest colony after Bermuda, must begin to fend for itself after centuries of dependence. St Helena is the most costly of Britain's 14 overseas territories.

After decades of vacillation the United Kingdom finally made a commitment to develop the island's tourism industry. To help the islanders do that, the British government is building them an airport – £250-million worth of access to fast transport and the instrument with which to drag this slowly decaying Dickensian society into modernity.

I am on the island as Basil Read's guest to inspect the South African company's progress with the airport. Basil Read won the tender from the British government to design, build, operate and transfer the airport against several competitors. They dropped out chiefly, as Basil Read's island director Deon de Jager says, because "it could not be done".

The airport is the biggest of its kind that the UK government has ever signed and is one of the largest construction projects awarded to Basil Read.

Forbidding grey
The RMS St Helena – the world's last working mail ship – rounds the island from the south-east. The coast is a forbidding grey, as the island of Dr Moreau might have been in the eye of HG Wells, and I wonder whether the island would turn out to be Moreau's laboratory of accelerated evolution, or would the film version of the book, The Island of Lost Souls, be more apposite?

On board the RMS in the bright temperate sunlight typical of the island's climate, the mood is light. After days of stoic endurance, the islanders among the passengers appear on deck having remained below for most of the voyage.

"We're Saints, see? St Helenans." My informant is fishing boat skipper and dive instructor Craig Jon. In the cargo hold is a new motor launch which Craig and his brother, Neil, plan to use for scuba diving.

The brothers don't have customers yet, but they bought the boat in South Africa in anticipation of an influx of tourists that would begin with the completion of the airport.

Jon's deliberate explanation must mean that he has said it before, that he will repeat it as often as necessary. He does so gently, if in a non-standard English accent alien to my South African ear, but there is no doubt about who and what he is. I ask the Jons what they paid for their new boat, but they won't say.

I decide the heavily accented dialect is a form of Cockney, but with an alien inflection assimilated from the descendants of slaves and indentured labourers. Perhaps it was formed in the island's heyday, during the regency era when George III's son, the Prince of Wales, ruled Britain as regent. That time more than a 1–000 ships a year anchored off Jamestown, the capital and victualing station for sailing ships.

But now, as the RMS approaches its anchorage, no more than a dozen yachts float in James Bay.

Redundant
There is no harbour. Passengers disembark on to lighter vessels which deposit them on a quay of sorts with the rising swell crashing into the rocks at the foot of a cliff overhanging Jamestown. Ours is the only ship in the bay and, with the rare exception, that is the way it has been for many decades.

It was steam, that first engine of modernity, which began the decline of the island as a victualing station, since it made sailing redundant and a shortcut between the Cape and Europe possible. The death knell to what little export industry the island had came in the 1950s when Britain replaced flax with nylon as raw material for its postal bags.

There are no other industries of any economic significance. Intermittent rainfall and erosion on a vast scale make agriculture a poor prospect. There is nothing to mine and outside of exotic sport fishing, the depth of ocean makes commercial fishing unlikely without a breakwater and harbour.

With the imminent retirement of the RMS, which, for the moment, delivers every life-sustaining necessity to the island, even that seems a remote possibility.

Also on board the ship was a representative of resort operator Mantis. He declined to be interviewed, but it is clear that the British government's anticipated 30 000 visitors a year to the island could justify the construction of at least one upmarket hotel.

The site on which Mantis has its eye is a 19th-century fort overlooking Jamestown. Other hotel groups, including Protea, have also expressed interest, according to Stuart Planner, the commercial property director of Enterprise St Helena, a government agency charged with tourism development.

The hotel groups must know something most of the Saints don't. If the island is to entertain 30 000 visitors a year the airport must receive 82 passengers a day, seven days a week, 52 weeks a year. It is difficult to see how the airport, which is designed to handle aircraft with a maximum capacity of 200 passengers (Airbus A320, Boeing 737-800) on its 1 850m concrete runway, will deal with the arrival of such hordes.

Possession of cannabis
The Saints to whom I spoke are mostly cynical about the tourism prospects and many oppose it, even if Basil Read employs about 250 islanders while the airport construction is under way.

A plebiscite conducted before the project started gave a 60% approval, but that number included the large diaspora of Saints in the UK, for whom fast transport home will be desirable and, unlike their compatriots on the island, more likely to be affordable.

The Saints on the island are poor, though, thanks to British welfare, not destitute. Crime is virtually unknown and violence rare. Most offences, according to the weekly police report, are connected to the possession of cannabis.

You may be right to judge the Saints as extraordinarily hospitable and laid-back islanders, but they are also shy and reserved to the point of subservience.

Class distinctions are along racial lines, with British expats working for the government on top of the pile and the darker descendants of slaves and labourers imported over centuries at the lower end, and for whom education and wealth prospects are limited. Most younger Saints either leave the island, or want to leave. That, too, is a circumstance that has prevailed for a long time. When the British established a naval station on the island in the 1840s to suppress the African slave trade across the South Atlantic, about 15 000 slaves were liberated there.

The British offered to repatriate them, but for illiterates captured all over Africa and sold in Madagascar, it was difficult to say where exactly home was. Now the Saints' choices seem as limited as they were before: Those who can, leave. The others, those who are unlikely ever to afford an air ticket off the island, or passage aboard the RMS, and who are unlikely to gain much from repatriated hospitality profits, must accept the largesse of its colonial owner – or perish. For many, St Helena is indeed The Island of Lost Souls.