Cosatu’s role is also to speak for the poor 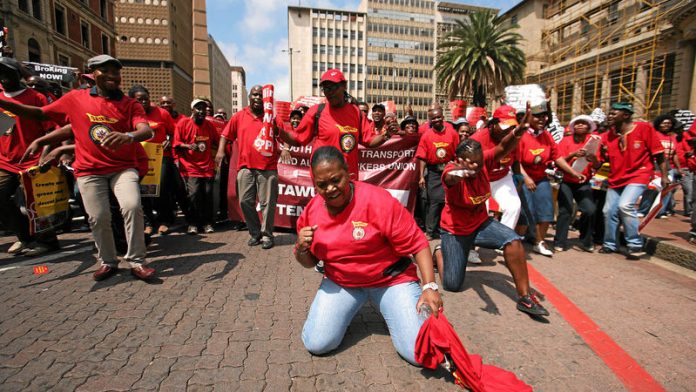 The trade union federation Cosatu is a giant, but a wounded one. For over 25 years, it has dominated the labour scene as the voice of organised workers. But now, there are big changes in the world of trade unions and rumblings that new forces are entering the scene.

This has been brought to the fore with the emergence of the Asso­ciation of Mineworkers and ­Con­struction Union (Amcu) and its rise to majority union status in the platinum sector.

Writing in the wake of Marikana, Leonard Gentle, of the International Labour Research and Information Group, argued that we are witnessing the emergence of a "new ­movement".

I have also heard the argument that Cosatu has become like the Trade Union Council of South Africa (Tucsa), the conservative trade union body that existed in the 1970s and 1980s. It became so bureaucratic that it no longer represented workers, leaving the way open for the emergence of more radical unions.

Such claims about Cosatu, however, are somewhat premature. Although those views count as timely warnings, it is too early to say that developments on the platinum mines herald the eclipse of Cosatu.

For its part, Cosatu retains many sparks of that old unionism. This is evident in the pockets of activism and the fire among its members. It is also detectable in Cosatu's opposition to e-tolls and in the federation's sustained membership levels of over two million members.

The comparison between Cosatu and Tucsa doesn't quite work. There are major differences between the two with respects to value base, operational style and role definition. For instance, several Cosatu unions remain vocal exponents of socialism and fundamentally reject the economic status quo. In addition, Cosatu and its member unions embraced political unionism – a willingness to take militant action on political issues.

But it is true that Cosatu unions remain weak. It is also true that, in an increasing number of sectors, the question arises as to whether Cosatu unions are militant enough. Vavi acknowledged as much when he talked this week of the need to "rebuild", to "campaign to ensure that unions serve the purpose for which they are established" and "to retain our tradition as a militant united force".

Poor shop-floor organisation
Nevertheless, the federation has lost its former glory through poor shop-floor organisation and extremely uneven service to members, the neglect of shop steward training, a complacency rooted in wealthy unions coupled with highly paid officials and the co-option of shop stewards with high salaries, as well as the inability to resolve intra-union divisions.

Cosatu itself acknowledged many of these weaknesses in its 2012 secretariat report. The federation noted the decade-long divisions in the Chemical, Energy, Paper, Printing, Wood and Allied Workers' Union, the breakaway in the South African Transport and Allied Workers' Union and the emergence of a rival force to the National Union of Mineworkers (NUM) on the platinum belt. It also bemoaned "serious flaws in membership service" and a decline in trade union education. Cosatu also admitted its failure to organise the huge army of casual and informal workers.

In some senses, political unionism, necessary for structural change, is a two-edged sword, especially if Cosatu allows itself to get distracted by fissures and political manoeuv­ring in the ruling party.

Of late, the federation has become almost paralysed by bitter divisions, with, for example, the National Union of Metalworkers of South Africa and the South African Municipal Workers' Union in one corner supporting Cosatu general secretary Zwelinzima Vavi and his leadership style and the likes of the NUM and the National Education, Health and Allied Workers' Union in the other. How will Cosatu dig itself out of the hole?

There are some initial options. It can easily improve worker education, although other problems are intractable, like the divisions in some of the member unions. Other challenges appear to be inherent to unions that have become so wealthy that they have lost their militant edge. But the most immediate challenge is the fierce battle between the warring camps in Cosatu.

Just after its birth, Cosatu also faced political differences in its ranks. Then the federation managed those differences in the interests of building a powerful labour voice. Time will tell if it has the leadership and political will to achieve the same today.

If Cosatu succeeds in fixing and transforming itself, it will exist side by side with the new emergent forces representing workers. If it does not, its influence on the labour scene could wane in the years ahead.

Crowded
Aside from the imperatives of workers and the need for them to engage employers through strong unions, Cosatu's voice is needed in our society to define its future. There is too little activity and hardly any players with clout to the left of the ANC while the space to the right of the ANC is rather crowded.

Cosatu or a force like it is needed to create a new equilibrium, one that creates more possibilities for the poor and exploited. It is needed to open debates that many think are closed, to speak out about inequality and to be a powerful voice for ending poverty and inequality.

If Cosatu fades, who will force us out of our comfort zones to confront the problems of deep poverty and rampant exploitation? Which organisation with sufficient muscle will get society to discuss openly the excesses of capitalism and the possibilities of a truly egalitarian society?

Cosatu acknowledged this social role when it said last year: "Our members and large sections of society appreciate our ability to speak truth to power, without fear or favour, on issues troubling our nation such as continuing unemployment, poverty and inequality, as well as corruption and greed, and issues of transparency." – South African Civil Society Information Service