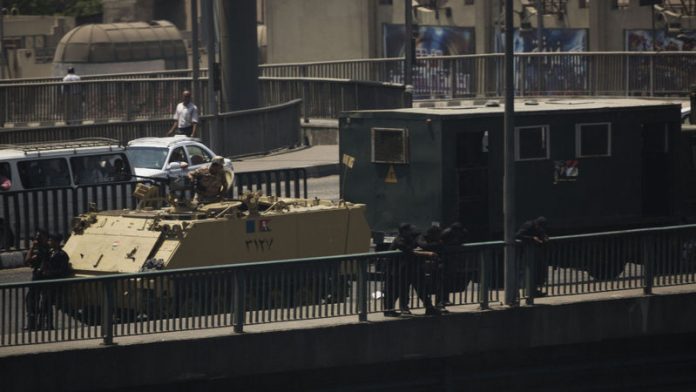 Reuters witnesses saw gunmen shoot from a window of the al-Fath mosque, where supporters of deposed president Mohamed Morsi had taken shelter during ferocious confrontations in the heart of the Egyptian capital on Friday.

Another gunman was shown on television shooting from the mosque's minaret and soldiers outside returning fire. Hours later, police moved in and secured the building, making scores of arrests as crowds on the streets cheered them on.

It was not clear if anyone died in the clashes — the fourth day of violence which has killed more than 700 people.

Trouble was also reported in the second city Alexandria. An office run by the Muslim Brotherhood was set ablaze and a security source said a pro-Morsi protester was killed.

With anger rising on all sides, Prime Minister Hazem el-Beblawi proposed disbanding the Brotherhood, raising the stakes in a bloody struggle between the state and Islamists for control of the Arab world's most populous nation.

"We are not facing political divisions, we are facing a war being waged by extremists developing daily into terrorism," presidential political adviser Mostafa Hegazy told reporters.

"We will win this war not only with security procedures, but according to the law and within the framework of human rights."

If Beblawi's proposal to disband the Brotherhood is acted on, it would force the group underground and could herald large-scale arrests of its members, placed outside the law.

Many Western allies have denounced the recent wave of killings, including the United States, alarmed by the mayhem in a country which has a strategic peace treaty with Israel and operates the Suez Canal, a major artery of global trade.

However, Saudi Arabia threw its weight behind the army-backed government on Friday, accusing its old foes in the Muslim Brotherhood of trying to destabilise Egypt.

Arrests after 'Day of Rage'

The health ministry said 173 people died in clashes across Egypt on Friday, including 95 in central Cairo, after the Brotherhood called a "Day of Rage" to denounce a crackdown on its followers on Wednesday that killed at least 578 people.

Among those killed was a son of Muslim Brotherhood leader Mohamed Badie, shot dead near the al-Fath mosque.

Fifty-seven policemen have also died over the past three days, the interior ministry said.

The authorities said they arrested more than 1 000 people after Friday's protests, and one handcuffed man was shown on television with a gun on his lap. The state news agency said 250 Brotherhood followers faced possible charges of murder, attempted murder and terrorism.

"Friday was a very bad, ugly day. There were attacks on police stations, ministries. The situation is very bad," the prime minister told reporters. "There will be no reconciliation with those whose hands have been stained with blood and who turned weapons against the state and its institutions."

The Brotherhood was officially dissolved by Egypt's military rulers in 1954, but registered itself as a non-governmental organisation in March in response to a court case brought by opponents of the group who were contesting its legality.

Founded in 1928, the movement has deep roots in the provinces and has a legally registered political arm — the Freedom and Justice Party — which was set up in 2011 after unrest that led to the downfall of the autocratic Hosni Mubarak.

The Brotherhood won all five elections that followed the toppling of Mubarak, and Morsi governed the country for just a year until he was undermined by mammoth rallies called by critics who denounced his rule as incompetent and partisan.

Brotherhood spokesperson Gehad El-Haddad said on Saturday the police had started to arrest the sons and daughters of the organisation's leadership.

Despite the bloodshed, the Islamist group has urged its supporters to take to the streets every day this coming week, but there was no sign of large rallies by late on Saturday.

"Our rejection of the coup regime has become an Islamic, national and ethical obligation that we can never abandon," said the Brotherhood, which has accused the military of plotting the downfall of Morsi to regain the levers of power.

In the first attack of its kind yet reported, a bomb blast ripped through the garden wall of the Egyptian consulate in the city of Benghazi on Saturday in neighbouring Libya, injuring a security guard. There was no immediate claim of responsibility.

Worryingly for the Egyptian army, violence was reported across the country on Friday, with deaths reported in at least eight cities and towns, suggesting it might struggle to impose control on the vast, largely desert state.

The government said 12 churches had been attacked and burned on Friday, blaming the Islamists for the destruction.

Foreign journalists in Cairo said they faced regular harassment as they tried to report on the clashes, with a number detained by police and civilian vigilante groups unhappy with coverage of the disturbances. – Reuters