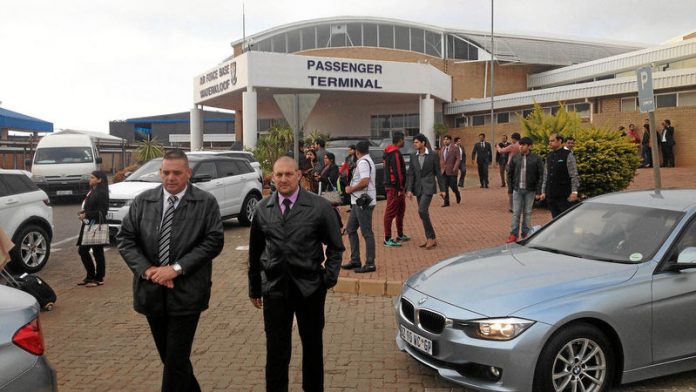 The military's code name for President Jacob Zuma – "Number One" – is expected to feature prominently in the military court case of Lieutenant Colonel Christine Anderson.

Anderson (59) has been suspended from her job for her role in the unlawful landing of the Gupta family's chartered jet at Waterkloof air force base on April 30, whereas the senior government official who apparently instigated the affair has received a "slap on the wrist".

According to the national secretary of the South African National Defence Union, advocate Pikkie ­Greeff – who is defending Anderson, she was informed by the former chief of state protocol at the department of international relations and co-operation, Bruce Koloane, that Number One wanted landing permission approved for the Jet Airways chartered flight JAI9900 from India to land at Waterkloof on April 30.

"It was confirmed to us in consultation with Ander­son that President Zuma is referred to as Number One and it is the code name in the military for the president," said Greeff. "It is just the way it operates."

The Guptas are close to Zuma and his son, Duduzane, is in business with them.

Permission was granted for the plane to land and it was Ander­son's job to prepare for it and welcome the 217 wedding guests. The passengers were then taken by light aircraft, helicopters or police-escorted vehicles to attend the lavish wedding of Vega Gupta and Aakash Jahajgarhia at Sun City's Palace of the Lost City.

Koloane has since received what Greeff believes is a "slap on the wrist" for his role in the debacle. The records of Koloane's disciplinary proceedings would be subpoenaed, he said.

"We need to see what­ever he admitted there," he said. "If he has admitted to using the president's name, we need to know that. At the start, he was the main guy and he set in motion a train of events. If he hadn't acted in this way, she [Anderson] wouldn't be in this position."

International relations spokesperson Clayson Monyela told the Mail & Guardian the department had not yet determined what role Koloane will play when he returns to work in October but confirmed he will not go back to his old job.

At Anderson's appearance on Friday this week, dates for the preliminary investigation will be confirmed by the military judge.

There is provision in the military disciplinary procedures for the defence or the state to call witnesses.

Greeff said he still has to make a decision on whether Zuma may be called to testify about the Gupta plane-landing scandal in terms of the Military Discipline Supplementary Measures Act.

Criminal charges should also be investigated against the Gupta family, said Greeff. "Section 42 of the Defence Act said this was an unlawful offence. Why are the Guptas not being called to book? Why has a docket not been opened, and why has the matter not been investigated by the police? This is a serious criminal offence. These soldiers would not be in court if no offences were committed."

In the government's justice, crime prevention and security cluster report about the use of Waterkloof by the Guptas, which was released in June, Zuma was found innocent, said Greeff. However, there were findings against Anderson, who was not even called to give evidence.

Greeff said Ander­son appeared to have accepted her situation but would continue to fight for justice and try to clear her name.

"Anderson is just waiting for it to be over. She is not very happy, " said Greeff. "I get the impression she is just wanting to go off on pension. She is a very strong person and she is angry and done with these guys."