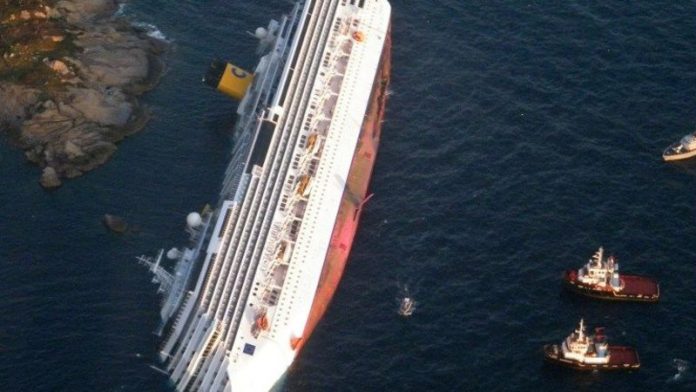 The salvage mission on the Costa Concordia cruise liner early on Tuesday completes one of the most difficult and expensive wreck recovery projects ever performed.

In a 19-hour operation which ended at 4am (2am GMT), the 114 500 ship was pulled upright by a series of huge jacks and cables and left resting in 30m of water on underwater platforms drilled into the rocky sea bed.

The success of the operation was announced in a brief statement by the head of Italy's Civil Protection Authority Franco Gabrielli and dozens of locals, who have lived with the wreck for over a year, came out to cheer the salvage crews.

"I think the whole team is proud of what they achieved. A lot of people said it couldn't be done," said Nick Sloane, the South African engineer coordinating the operation.

"I feel good, it's time for a beer," he said, heading into a portside cafe which had to be blocked off by police to stop reporters and well-wishers from following him inside.

The Concordia, a 290m-long liner carrying more than 4 000 passengers and crew, capsised and sank, killing 32 people on January 13 2012, after it came too close to shore and jagged rocks tore a hole in its side.

As first light broke, the marks of its long period on the rocks were visible. Brown mud stains scarred the hull which was gashed and dented after being crushed under its own weight.

As part of a salvage project estimated to cost more than $801.15-million, the vessel will remain in place for some months while it is stabilised and refloated before being towed away to be broken up for scrap.

The so-called "parbuckling" operation, in which the hulk was painstakingly rotated upright, took longer than the 10-12 hours estimated but engineers said it had gone exceptionally smoothly.

"It was a perfect operation, I would say."

In contrast to the accident, a catalogue of mishap and misjudgement over which the Concordia's captain Francesco Schettino faces multiple charges, the salvage was a tightly coordinated engineering feat.

The Concordia salvage is expected to be the most expensive maritime wreck recovery ever, accounting for more than half of an overall insurance loss of more than $1.1-billion.

A multinational team of 500 salvage engineers and divers was on Giglio for most of the past year, stabilising the wreck and preparing for the lifting operation, which had never been attempted on such a large vessel in such conditions.

In painstaking work, the Concordia was pulled up inch by inch until it was raised high enough for water tanks welded to one side to start to pull it down by the force of gravity.

A series of platforms, drilled into the rock and 16 000 tonnes of grouting piled up to create an artificial sea bed held the ship in place once it was upright.

However the work will not be complete until the vessel is towed away from the island, probably by next spring.

"We have to do a really good survey. There's a lot of damage on the starboard side and once we assess the damage then we will know where we are for the refloat," Sloane said.

Oil booms surround the vessel to intercept waste water and oil trapped in the ship, but no significant environmental damage could be seen in the first hours of the operation. – Reuters

Italian authorities call off the search for bodies