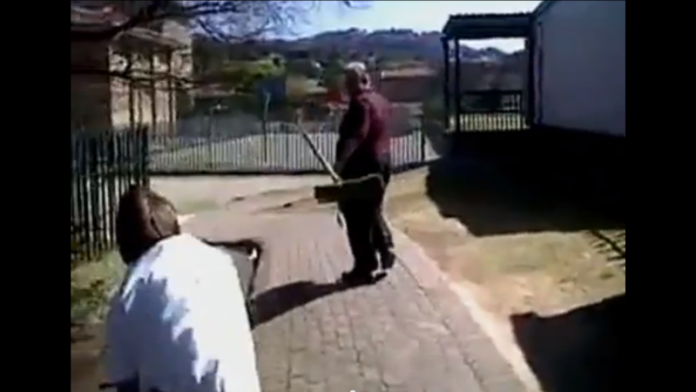 Authorities at Glenvista High School have suspended a grade eight pupil who assaulted a male teacher. The pupil is now facing a disciplinary hearing, according to Eyewitness News.

A classmate captured footage of the boy attacking a male teacher with a broom and a chair on his cellphone and posted it online. The video clip has since gone viral and entered mainstream news.

The teacher responded to the attack by walking away, leaving the classroom with the boy's rucksack.

The Gauteng department of education has condemned the assault and instructed the school to suspend the pupil immediately, according to spokesperson Gershwin Chuenyane.

Chuenyane commended the teacher "for being a professional" and said he will be provided with counselling.

It is unclear what sparked the attack, but there are unconfirmed reports that the incident was drug-related.

Fellow pupils can be heard in the video laughing and egging the boy on. One parent is calling for the suspension of these pupils for being accomplices to the incident.

The same parent described the teacher as an older, humble man.

Pre-service teachers adapt in a pandemic

On Monday, 5 October — World Teachers Day — we recalled the teachers who helped us become the people we are today
Read more
Opinion

Economists should really look wider before speaking about schools

Reopening of schools seems to be less about the teachers, parents and students and more about desperate attempts to rescue our failing and unsustainable capitalist economy
Read more
Education

Because of the government’s indecisiveness, we have missed the boat on charting new territory for learning
Read more
Advertising