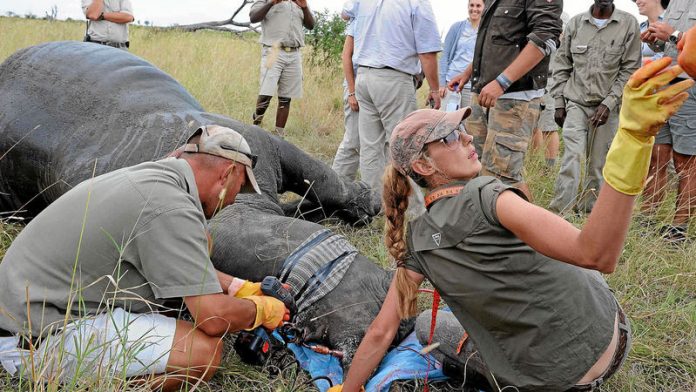 The last four years have seen a dramatic increase in the number of rhino killed by poachers across the country. In 2009 the number barely touched the double-digits. By last year it was 668. That number was passed in mid-September this year.

Edna Molewa, the environment affairs minister, said, "I can assure you that we will not allow rhino to become extinct on our watch." This was at a parade for world rhino day in Pretoria on Saturday.

A memorandum was also handed over by youth representatives at the march. It said, "The price of rhino horn is just not worth it, as it will eventually lead to the rhino's extinction from the world."

There have been successes, with around 200 poachers arrested this year. Last week the police arrested a "high value" individual on the South African side of the park. Rhino crimes have been elevated to the National Joint Operations Centre, and conviction rates have increased, as well as the severity of penalties.

Arrested
​With the number of rhino being killed constantly rising, the department has started to measure its success in the number of poachers that are arrested. Albi Modise, its spokesperson, said the main focus for the department was to get every sector to work together.

World Rhino Day also trended on twitter, with #iam4rhinos being mentioned over 150 000 times. A World Wide Fund for Nature (WWF) initiative, it saw celebrities from around the world tweeting their support for the war against poaching.

The department has also tried to stop people abusing the charity flowing into rhino conservation by starting the National Rhino Fund. This will take all the different groups soliciting funding under one body so the money goes to stopping poaching and cannot go to dubious individuals or groups.

A survey done in Vietnam by wildlife-monitoring network TRAFFIC found that people were using rhino horns as gifts and to impress people. Because it was seen as such a status symbol, the demand was constantly growing, it found.

If other solutions are not found, Molewa has previously said at press conferences that deaths could overtake births by as early as 2026.  "2026 is the year where we see the beginning of the extinction of the rhino. This is around the corner and that is scary," she said.

Flood the market
Driven by this warning, her department is looking to ask the Convention on the International Trade in Endangered Species (Cites) for permission to have a once-off sale in rhino horn. This would hopefully flood the market and stop the activities of poachers as demand would be met by legal horns.

South Africa has also signed a Memorandum of Understanding with Vietnam, which commits the two countries to working together to stop poaching. The south-east Asian country is seen as a major destination of rhino horns, which are then distributed to China and the region.

The Kruger National Park is feeling the brunt of poaching, with 418 rhino killed there this year. Most of these are the victims of poachers crossing from Mozambique after the border fence between the two countries was taken down in the park.

Re-erecting the fence
​The last rhino on the Mozambican side is thought to have been poached this year. A rhino that crosses the border has 48 hours to live and rangers from the South African side have to stop at the border, even if they are pursuing suspects. An agreement between the two countries is trying to change this.

For now environmental affairs is planning to erect the border fence again, at a cost of R400-million. Treasury has also given it R75-million to fight poaching.

But with 688 rhino killed so far, and with over three months left in the year, the numbers suggest that there will be 50% more rhino killed this year. South Africa has 90% of the world's rhino, with their numbers hovering around 20 000.

The anonymous tip-off line for people who want to report any incidents of poaching is 0800 205 005.