Nobel prize goes to scientists who took chemistry into cyberspace 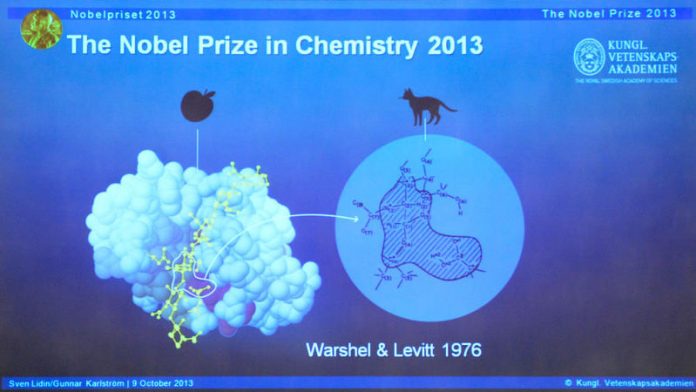 Three US scientists won the Nobel chemistry prize on Wednesday for pioneering work on computer programs that simulate complex chemical processes and have revolutionised research in areas from drugs to solar energy.

The Royal Swedish Academy of Sciences, awarding the prize of $1.25-million to Martin Karplus, Michael Levitt and Arieh Warshel, said their work had effectively taken chemistry into cyberspace. Long gone were the days of modelling reactions using plastic balls and sticks.

"Today the computer is just as important a tool for chemists as the test tube," the academy said in a statement. "Computer models mirroring real life have become crucial for most advances made in chemistry today."

Powerful computer models, first developed by the three scientists in 1970s, offer a new window onto such reactions and have become a mainstay for researchers in thousands of academic and industrial laboratories around the world.

'Like a movie'
In drug design, for example, scientists can now use computers to calculate how an experimental medicine will react with a particular target protein in the body by working out the interplay of atoms.

"The field of computational modelling has revolutionised how we design new medicines by allowing us to accurately predict the behaviour of proteins," said Dominic Tildesley, president-elect of Britain's Royal Society of Chemistry.

Today, all pharmaceutical companies use such computational chemistry to screen experimental compounds for potential as medicines before taking into further tests on animals or people.

The ability to model chemical reactions has also grown as computers have become more powerful, while progress in biotechnology has produced ever more complex large molecules for use in treating diseases like cancer and rheumatoid arthritis.

"It has revolutionised chemistry," Kersti Hermansson, professor in organic chemistry at Uppsala University, said of the computer modelling.

"When you solve equations on the computer, you obtain information that is at such detail it is almost impossible to get it from any other method."

"You can really follow like a movie, in time and in space. This is fantastic detail … You can solve problems, determine why things happen – energy problems, corrosion, chemical reactions, materials, why the properties are how they are and how you could improve them to design better materials."

The approach has applications in industrial processes, such as materials science, the design of solar cells or catalysts used in cars. For the former, programs can be used to mimic the process of photosynthesis by which green leaves absorb sunlight and produce oxygen.

Early setbacks
It was not an easy scientific journey, however. Warshel said he had been convinced of the case for using computers to simulate chemical reactions since 1975 but did not know if he would live to see it adopted. "I always knew it was the right direction, but I had infinite difficulties and setbacks in the research. None of my papers were ever published without being rejected first," he said.

"It was clear to me since 1975 that this technique was the most powerful one ever used in biophysics. But I didn't know if I would ever be proved right in my lifetime."

A unique insight of Warshel, Karplus and Levitt was to use computer simulations to combine quantum mechanics, which explains the making and breaking of chemical bonds, with classical Newtonian mechanics, which captures the movement of proteins.

Ultimately, the ability to computerise such complex chemical processes might make it possible to simulate a complete living organism at the molecular level – something Levitt has described as one of his dreams.

Levitt stressed the importance of the raw passion for science that marks out top scientists. "I am a computer geek," he said.

Back in the 1960s there were no personal computers, he said, so the only way for scientists to get their hands on a computer was to find ways to use it in their work. "That's not to say that I became a computational chemist in order to play with computers, but a large part of any creative activity is to feel that you're playing. All science is driven by passion; you have to feel that you just have to do it. You have to care about things other people don't care about."

Chemistry was the third of this year's Nobel prizes. The prizes for achievements in science, literature and peace were first awarded in 1901 in accordance with the will of businessperson and dynamite inventor Alfred Nobel. – Reuters