Displaced families in DRC at risk as food dries up 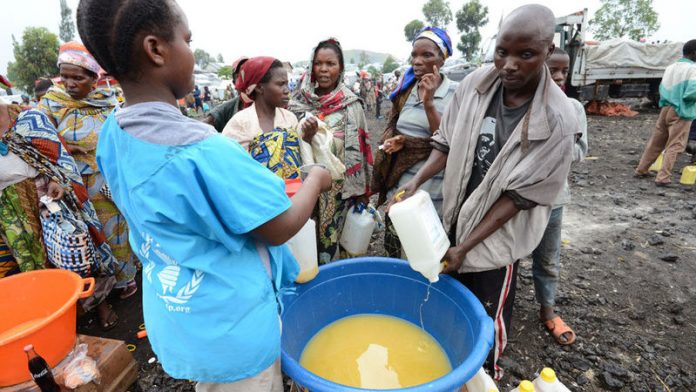 Some of the most haunting victims of the two decades of conflict ravaging eastern Democratic Republic of Congo (DRC) are the starving children – and with the World Food Programme (WFP) struggling to fund its operations in the country, their fate looks likely to get worse.

At the Mugunga I refugee camp, where more than 50 000 displaced people live crowded together under white tents, hundreds of mothers line up at the health centre to get a special liquid called "premix" – a porridge of maize meal, soy, oil and sugar that provides their children 1 057 precious calories.

It also lures the mothers into the clinic – a handful of dilapidated, one-storey buildings sheltered by a copse of large trees – for paediatric care and lessons on nutrition.

The programme has rescued more than 900 children from malnutrition in the past 10 months.

But its future is threatened by the financial troubles the WFP is facing in DR Congo.

The UN food agency has been hit by a funding shortfall because of budget constraints in economically stagnant donor countries and emergencies such as the Syria conflict that have devoured resources that would have otherwise been spent elsewhere.

Funding the DRC
In the DRC, the WFP must come up with $70-million to fund its operations for the next six months.

The problem stretches beyond the Mugunga camp. The WFP had planned to give food aid to 4.2-million people in the vast central African country by the end of 2015.

The WFP has called malnutrition in DR Congo a "silent emergency", one that affects 60% of children under five years old.

The rate is even higher in the mineral-rich but deeply troubled east, the cradle of back-to-back wars that rocked the country from 1996 to 2003 and the scene of a still-raging conflict between the military and a group of army mutineers called the M23.

"The needs here are immense," said Sister Marie-Valerie, a nun who runs the health centre at the edge of the Mugunga camp for Catholic charity Caritas.

"The people in the camp have nothing," and the residents of the surrounding area do not fare much better, she said. "They can barely come up with one meal a day."

The consequences of malnutrition can last a lifetime, and sap a nation's resources through higher child mortality rates and physical and mental underdevelopment.

Diagnosed with malnutrition
To fight it, Caritas launched the pilot "premix" programme at Mugunga in December for an initial period of one year.

Funded by the WFP, it is open to children aged six months to five years and pregnant and nursing mothers.

But the WFP's money problems mean programmes like this one risk grinding to a halt.

On a recent day at the Mugunga health centre, the noise of crying babies filled the air as mothers in brightly coloured dresses waited in the drizzling rain to have their children weighed, measured and looked over from head to toe – check-ups designed to detect malnourishment.

After taking part in a nutrition class in a dark wooden building, the mothers left clutching enough porridge to give their children the 240-gram daily dose for 15 days.

The mothers had five or six children on average, and health workers adamantly told them to give the mixture only to the ones who had been diagnosed with malnutrition.

'My children will get better soon'
The programme is working, said Marie-Valerie: 85% of children get better within three months.

Justine Nabanyera, who has seven children, had two of them admitted to the programme, part of a group of 56 new enrolees that day.

She said the porridge would allow her to give her children a more complete diet than just the normal food aid she receives.

"The WFP [aid] for people displaced by the war is really not enough," she said.

Mapendo Mubawa, a 30-year-old mother of nine, was there with two of her children, who were also registered for the programme.

"I have hope that my children will get better soon," she said.

But to guarantee that happens, the WFP must find more funding.

Without it "we risk being unable to continue helping those who benefit from our programmes from November", said Wolfram Herfurth, the WFP's co-ordinator for the eastern DRC. – AFP