Princess Di’s dark side doesn’t get a look in 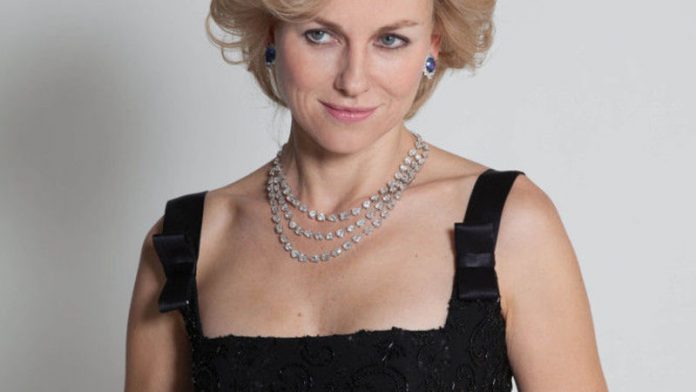 NOT THE BIOPIC OF THE WEEK EITHER

This is because of an excruciatingly well-intentioned, reverential and sentimental biopic about her troubled final years, laced with bizarre cardboard dialogue – a tabloid fantasy of how famous and important people speak in private.

The green space outside the Odeon Leicester Square may well be covered in cellophane-covered bouquets in the days to come, in memory of this new woe. It was here, after the film was over, that I crouched down and, like [former BBC TV newsreader] Martyn Lewis of old, my lip trembled. Only by imagining a cathartic waltz with John Travolta was I able to control myself.

Is this film an MI5 plot to blacken Diana's name and make her look plastic and absurd? The movie isn't so much Mills & Boon as a horrendous Fifty Shades of Grey with the S&M sex taken out – and replaced with paparazzi intrusion and misunderstood charity work.

It has the highest credentials: the highly talented Naomi Watts plays Diana – an actor who, since her appearance in David Lynch's Mulholland Drive in 2001, has been searching for a project worthy of her. That search goes on.

Diana is directed by the German filmmaker Oliver Hirschbiegel, who made the brilliant Downfall, about Hitler. However, his touch with a love story – with English dialogue – is less sure.

An affair with a Pakistani heart surgeon

The drama is about Diana's post-Charles affair with the handsome Pakistani heart surgeon, Dr Hasnat Khan, a dismally written role with which the actor Naveen Andrews can do little or nothing. Diana is forced to see Hasnat in disguise, wearing a black wig that makes her look weirdly like Liz Hurley. Hasnat is a proud and passionate man who loves Diana, but his family is unsure about it all and he can't reconcile his feelings with the prospect of his work being disrupted and achieving celebrity status as mere arm-candy.

And Dodi Fayed? Dodi was no one. He is presented here as a mere rebound fling – a ruse Diana co-created with long-lens photographers, intended to make Hasnat jealous. Well, maybe. But this seems a highly simplistic view of events. It seems possible, to say the least, that her feelings were much more complicated than this, and that Hasnat meant less and Dodi more than this sucrose and emotionally authorised version will allow.

Watts's elaborate impression of Diana has the upward look, the doe-eyed gaze of seduction and reproach – and she can do the estuary-posh voice. But she looks as though she's in a two-hour Spitting Image sketch scripted by Jeffrey Archer. And, despite some nods to that manipulative reputation, there is nothing to show the grown-up wit and charm that so entranced so many.

One scene shows her private secretary reminding Diana of her upcoming lunch with Clive James. I would give a lot to see that scene (Ben Mendelsohn? Bald wig?), but they don't try it. And, for all the hints at her moody and irrational side, all is fundamentally bland saintliness.

Those very small parts of the film that are silent montages of Diana's lonely, alienated life work well. But the moment anyone, anyone at all, opens their mouth, we are in TV-movie-land, soap-land. Ironically, we see Diana and Hasnat settling down on the sofa to watch an episode of Casualty and then hanging on for Match of the Day. The dialogue echoing out of the TV sounds more relaxed than what is being said by the characters.

"A doctor's triumphs are only temporary. I learned that from Victor Chang," Hasnat says to her wisely as they walk along. "He was the man you studied under in Sydney," replies Diana. And so it goes on: so many lines are actually stage directions, telling us who people are and what we should be thinking about them.

As her affair with Hasnat unravels, Diana starts to harass him and behaves badly. But things calm down. "Yes, I've been a mad bitch," she says matter-of-factly. Well, not exactly. More like a silly and somehow implausible schoolgirl.

A good film could be made about Diana's dark side – that is, her flawed, nonsaintly human side. An entire movie could be made, for example, about her ugly, obsessional spat with her sons' nanny, Alexandra "Tiggy" Legge-Bourke, whom she suspected of having an affair with Charles and whom she publicly insulted. That really was dark. But it doesn't fit the image and so it is airbrushed out of the record here.

Diana's relationship with Hasnat may conceivably have been exactly as this film says it was. People in love can sound gooey and silly, of course. But by excluding everyone else, in particular Charles, and any real depiction of her relationship with her sons, the film creates a distorted, sugary and preposterous impression – Diana as the Heiress of Sorrows. – © Guardian News & Media 2013

I just wanted to hear your voice

If we choose our friends, then family surely chooses us. Sometimes we're lucky enough to have friends in family
Read more
Friday

The new biopic starring actor Naomi Watts as Diana has been criticised by one of the principal characters depicted in it, heart surgeon Hasnat Khan.
Read more
World

New information about Princess Diana’s death to be probed

The royals Katerpult to glory

Kate, the Duchess of Cambridge, is topless in the French magazine Closer - and it is too close. The duchess is no feminist, or anything like one.
Read more
Advertising