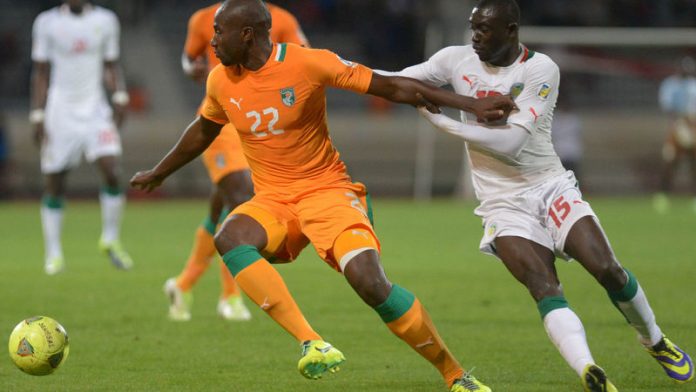 Côte d'Ivoire qualified for a third straight World Cup after weathering Senegal's late onslaught in a 1-1 draw in the second leg of their play-off on Saturday to progress 4-2 on aggregate.

The Ivorians joined Nigeria as the first African teams to reach next year's finals after Salomon Kalou snatched a last-gasp equaliser against their West African rivals.

Cool-headed substitute Kalou scored with the last kick of the game after his captain Didier Drogba gave away a late penalty to set up a storming finish in Casablanca.

Moussa Sow's 77th minute penalty gave Senegal a late lifeline as they attempted to claw back a two-goal deficit from last month's 3-1 first-leg defeat in Abidjan.

But as they pressed for a second that could have taken them to Brazil on away goals — missing a gilt-edged chance through Mame Biram Diouf deep into stoppage time — Senegal got caught on the counter and Kalou fired home superbly to end the drama.

The 35-year-old Drogba played a central role in a furiously paced match and gave away the penalty with a tug on the shoulder of Sadio Mane.

He had displayed his versatility early on with a dramatic off-the-line bicycle-kick clearance to deny Dame Ndoye, whose 13th minute header was the first decent effort of the match.

But Drogba's theatrical side was also on display as he fell to ground far too frequently, infuriating the opposition.

The amount of time Drogba had to spend helping out in defence reflected Senegal's dominance, despite being given little chance of success against the top-ranked Ivorians on neutral territory in Morocco.

Côte d'Ivoire goalkeeper Boubacar Barry bravely denied Papiss Cisse after halftime and Senegal's appeals for a 57th minute penalty, when Kolo Toure looked to have tugged down Ndoye, were waved away.

Saturday's match was played at a neutral venue because Senegal were banned from their home stadium in Dakar after crowd violence last year.

Ivorian qualification followed that of Nigeria, who earlier on Saturday became the first African country to reach the 2014 finals after beating Ethiopia, also 4-2 on aggregate.

Côte d'Ivoire competed in the last two World Cups in Germany and South Africa but failed to get past the first round.

Three more qualifiers from Africa will be settled by Tuesday. – Reuters

Dakar protests: A day at the ‘stone factory’