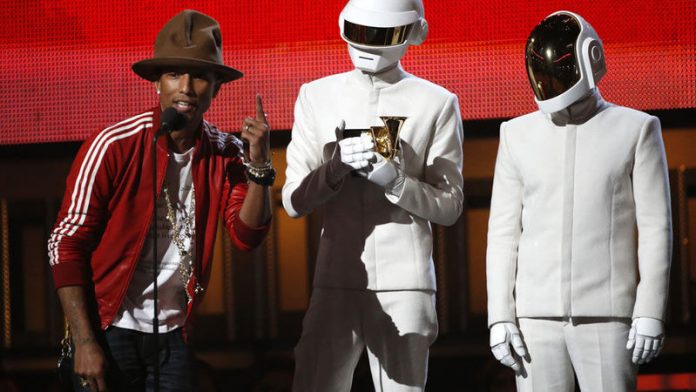 In a first for the Grammys or any big US awards show, 33 couples, both same-sex and straight, were married by Queen Latifah to the Macklemore & Ryan Lewis gay rights anthem Same Love. Madonna emerged in a white suit and cowboy hat to conclude the ceremony with Open Your Heart.

The quirky robotic duo scored the double win of album of the year for Random Access Memories and record of the year with the summer dance hit Get Lucky, featuring Pharrell Williams and Nile Rodgers.

"When I was drinking years ago, I used to imagine things that weren't there were frightening. Then I got sober and two robots called me and asked me to make an album," quipped Paul Williams, one of the featured artists on Random Access Memories.

Formed in the early 1990s by French DJs Thomas Bangalter and Guy-Manuel de Homem-Christo, Daft Punk were pioneers of the electronic dance music phenomenon that has recently swept the US mainstream pop industry.

"Honestly, I bet France is really proud of these guys right now," said Pharrell Williams, speaking for the French duo who wear masked helmets and do not speak. Williams also won music producer of the year for his work with artists including Robin Thicke, Jay Z and Jennifer Hudson.

Rodgers praised the duo for creating their electronic music album using live music recorded on to analog tape, calling it "a labour of love".

"The fact that they decided to put this much effort into the music and bringing in musicians, they had this incredible vision and they believed they achieved something greater by doing that," Rodgers said backstage.

Newcomers
Lorde (17) won the Grammy for song of the year with her breakout hit Royals, sharing the award for songwriters with Joel Little. "Thank you to everyone who has let this song explode because it has been mental," Lorde said. They triumphed over the writers behind Katy Perry's Roar and Bruno Mars's Locked Out of Heaven, among others.

The Recording Academy anointed Seattle-based rapper-producer newcomers Macklemore and Ryan Lewis with the Grammy for best new artist. They swept the rap awards – best rap album, song and performance – and arguably presided over the biggest dramatic moment of the night, the marriage ceremony in a cathedral-like setting.

Stellar performances
But the 56th Grammy Awards, the music industry's top honours handed out by the Recording Academy across 82 categories, may be remembered more for its performances and unscripted moments than the awards that were bestowed.

The two surviving Beatles, Paul McCartney and Ringo Starr, came together for a rare joint performance at the ceremony coinciding with the 50th anniversary of the British group's breakthrough on American television. With McCartney at the piano and Starr at his drums, the two played a new song Queenie Eye, a catchy tune that hearkened back to the Beatles' trademark hits.

It was only the fourth time they had performed together on stage since a 2002 concert to honour the late George Harrison. John Lennon's widow, Yoko Ono, and son Sean Lennon were in the crowd, dancing along.

Minutes into the three-and-a-half-hour show, Beyonce and rapper husband Jay-Z sang Drunk in Love, her first public performance since her surprise self-titled album in December, a game-changer in the music industry for its stealth release.

The first hour was then dominated by scaled back, intimate performances by John Legend, Taylor Swift, Lorde and Keith Urban and Gary Clark Jr, spotlighting the artists' vocals and music.

Later in the show, Jay-Z gave a shoutout to the couple's 2-year-old daughter, Blue Ivy, while accepting the award for best rap collaboration for Holy Grail featuring Justin Timberlake. "I want to tell Blue, look, Daddy got a gold sippy cup for you." Within minutes, the hashtag #GoldSippyCup became a top trending topic on Twitter.​

Seattle-based Macklemore & Ryan Lewis, who rose through the independent music scene to storm the mainstream charts with hits such as Thrift Shop and Same Love, a homage to marriage equality and gay rights, performed Same Love with vocalist Mary Lambert as the 34 couples married on air during the live broadcast on CBS.

Rock legends
McCartney and former members of grunge rock band Nirvana, including Foo Fighters frontman Dave Grohl, won best rock song for Cut Me Some Slack. "It was magic for me playing with these guys," said McCartney. "I found myself in the middle of a Nirvana reunion and I was very happy."

On Monday, the Recording Academy's The Night that Changed America: A Grammy Salute to the Beatles will pay homage to the Fab Four's February 1964 performances on the Ed Sullivan Show, which is credited with launching rock music's so-called British Invasion.

The final performance by Nine Inch Nails, Queens of the Stone Age, Grohl and Fleetwood Mac's Lindsey Buckingham hit a sour note as CBS rolled the end credits over the music. Nine Inch Nails lead Trent Reznor later sent out a tweet with the words "Music's biggest night … to be disrespected." – Reuters