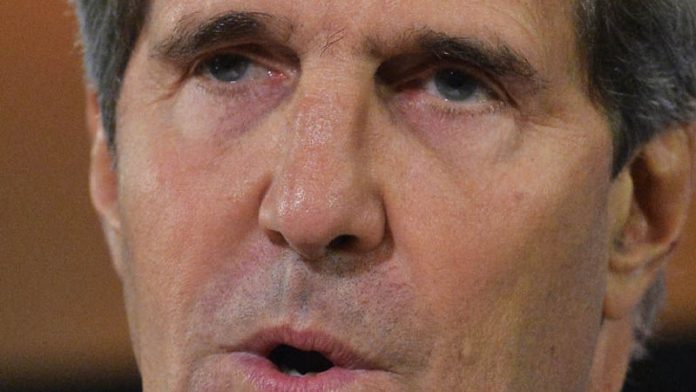 US Secretary of State John Kerry is holding a gun to Israel's head in peace talks with the Palestinians by warning it could face international isolation if negotiations failed, a senior Cabinet minister said on Sunday.

The remarks by Strategic Affairs Minister Yuval Steinitz, who is close to Prime Minister Benjamin Netanyahu, followed recent accusations by Israel's defence minister that Kerry was being "messianic" in his pursuit of a peace deal.

Kerry, in a discussion at a Munich security forum on Saturday, touched a nerve in Israel by pointing to "an increasing de-legitimisation" campaign building up against it internationally and "talk of boycotts" if the Israeli-Palestinian conflict did not end.

"Are we all going to be better with all of that?" asked Kerry, who is seeking to seal a framework agreement soon that will set a path toward a final accord on peace and Palestinian statehood.

Steinitz seized on the top US diplomat's remarks as a threat against Israel that would only encourage the Palestinians to harden their positions in the six-month-old negotiations, which have shown few signs of progress.

"The things … Kerry said are hurtful, they are unfair and they are intolerable," Steinitz told reporters.

"Israel cannot be expected to negotiate with a gun to its head when we are discussing the matters which are most critical to our national interests."

Netanyahu, in public remarks at the weekly meeting of his Cabinet, was more guarded – making no direct mention of Kerry, who is trying to reach a framework deal for a final agreement.

But, calling any attempts to impose a boycott on Israel "immoral and unjustified", Netanyahu said: "No pressure will cause me to forfeit the State of Israel's vital interests, chiefly the security of its citizens."

Netanyahu is facing pressure from another direction – ultranationalists within his coalition government – to oppose any evacuation of Jewish settlements from Israeli-occupied land Palestinians seek for a future state.

Most countries consider those enclaves illegal, a position Israel disputes.

Moderate members of Netanyahu's administration have warned of catastrophe if the right-wing leader, whose Likud party is openly sceptical about the US-brokered peace talks, walks away from the table.

His chief peace negotiator, Justice Minister Tzipi Livni, has described the negotiations as "the wall stopping a wave" of economic boycotts. And she has cautioned that Israel could face the sort of isolation imposed on South Africa during years of apartheid.

Companies in Israel's largest economic partner, the European Union, have already started to signal their concern.

One of the largest pension funds in the Netherlands, PGGM, announced last month is was divesting from five Israeli banks because of their business dealings with Jewish settlements that dot the occupied West Bank and East Jerusalem, territory Israel captured in the 1967 Middle East war.

She announced on Thursday she had quit as a global ambassador for Oxfam, which had called Johansson's association with SodaStream incompatible with her role for the charity. – Reuters