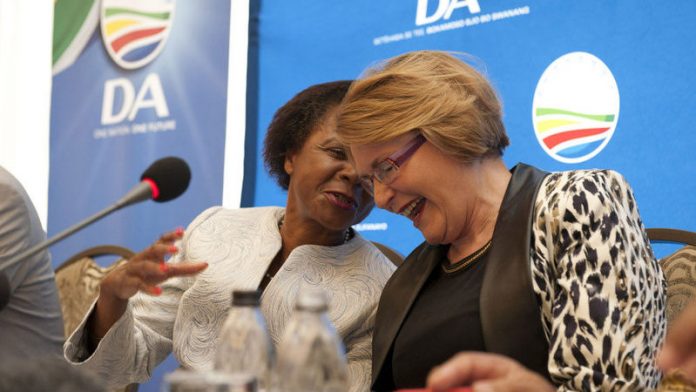 The ANC's spokesperson Jackson Mthembu told the Mail & Guardian on Monday both the Democratic Alliance (DA) and Agang SA had lost credibility after it emerged Mamphela Ramphele would no longer be joining forces with the DA and standing as its presidential candidate.

It was a mystery to him how a marriage between the two was proposed in the first place, said Mthembu.

"A white party remains white, in the words of Ramphele. Then all of a sudden there was a black face, and that is renting," he said. "Then she suddenly realised how truthful her own statements had been, and she started to reverse, dealing with her own integrity in the process."

Just five days after an announcement that Ramphele was joining the DA and standing as its presidential candidate, the marriage is already over.

On Sunday night, DA party leader Helen Zille claimed Ramphele "reneged" on the agreement. Zille said the respected academic turned politician was playing a "game of cat and mouse" after she backed out of the agreement.

'Reneged'
"The Democratic Alliance leadership team today met with Dr Ramphele to finalise the terms of our agreement that she stand as the DA's presidential candidate. This was to be the formalisation of the public announcement made on Tuesday last week," Zille said in a press statement on Sunday.

"At the meeting, Dr Ramphele reneged on the agreement that she stand as the DA's presidential candidate, and that Agang SA's branches, members and volunteers be incorporated into the DA. This about-turn will come as a disappointment to the many South Africans who were inspired by what could have been a historic partnership."

Zille said it was rare for a political party to offer the position of presidential candidate to a leader from another party.

"But we believed this move would be in the best interests of South Africa. People are looking for a strong and united alternative to [President] Jacob Zuma's ANC, and we felt that Dr Ramphele would help us speed up the realignment of politics," said Zille. "Constitutionally, she could only go to Parliament as the DA's presidential candidate if she is a member of the DA."

'In good faith'
Zille said the DA negotiated with Ramphele "in good faith",  and elaborated on her reasons for pursuing her to join the party, even though there were many false starts.

"Indeed she is a long-time personal friend of mine and I sought to bring her into politics over many years.  We have been through many false starts, but when Dr Ramphele insisted on Monday that we go public on Tuesday to announce her acceptance of our offer of the DA's presidential candidacy, we accepted that she had finally made up her mind.

"This is a great pity. Since Tuesday's announcement, Dr Ramphele has been playing a game of cat and mouse – telling the media one thing, Agang supporters another thing, and the DA another. It is not clear what her objective is, but whatever it is, it is not in the interests of the South African people."

Ramphele's about-turn became evident to South Africans on Friday, just days after the press conference to announce her as the DA's presidential candidate. At a press conference in Cape Town on Tuesday, Ramphele was photographed kissing Zille as the pair sealed the deal.

The DA then issued a joint statement, claiming it would be welcoming Ramphele and her Agang SA followers to the party. But Ramphele posted a formal statement on the Agang SA website opposing the "joint statement", and claiming she would not be accepting DA membership.

The DA announced a press conference to be held on Monday in Johannesburg. In a show of force, Zille, DA federal chairperson Wilmot James, DA parliamentary leader Lindiwe Mazibuko and the party's national spokesperson Mmusi Maimane, were briefing the media on Ramphele's "reneging".