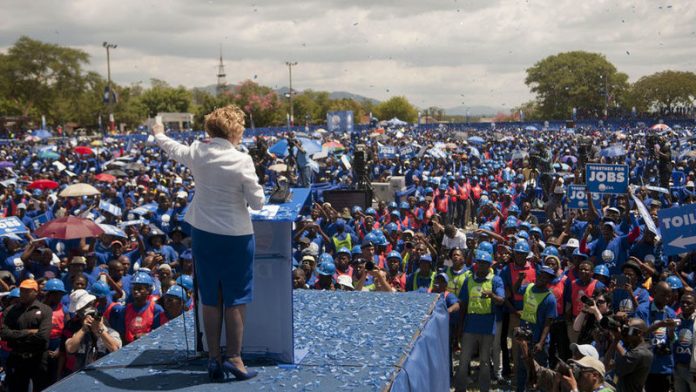 Helen Zille has overseen large growth in the Democratic Alliance in her seven years at its helm but a number of critics say she has increasingly become a liability, particularly after her latest public meltdown on Twitter.

She has run into controversy several times on the platform, which then spills over into other media, posing a headache for ordinary leaders on the ground who have to justify her ill-advised remarks, which are often racially problematic.

"It has become quite a liability for the party that we have to clean up her own personal prejudice that she has with people," said one DA representative who, like most on matters referring to their leader, preferred to remain anonymous. "I think people are quite upset at her many altercations on Twitter."

If Zille was any other member of the DA, it is likely she would have to face disciplinary action for her comments about race.

But it seems that most in her party are too afraid to challenge her about her use of Twitter, which is widely regarded as detrimental to the party – despite the fact that sources within the DA say she has flouted the party's own social media policy.

Recent controversy
Her latest fight was with journalist Carien du Plessis over a City Press article on the party's manifesto, which Zille alleges is factually incorrect and evidence of bias on Du Plessis's part. Zille also took issue with Du Plessis commenting on the hashtag "DA is a joke" on Twitter.

Many in her party say Zille went too far when she made reference to Du Plessis's background. "She is so terrified that she will be damned by her own complexion that she has to bend over to prove her political correctness," ran one of a string of attacks by Zille over two days, and: "Carien is trying so desperately to hide the Missus class from which she comes."

"There is a very strict social policy in place. If people transgress, they can face disciplinary action," the party representative said.

Cautious approach
The representative said no leader was willing to take on Zille and "it's making people really angry. They should be cautioning her but they are not because they are probably scared themselves. It's not healthy for an organisation … No one has the appetite to go up against her."

It's not Zille's first Twitter controversy. In 2012, she made a quip about "education refugees" from the Eastern Cape flooding the Western Cape, which sparked a public outcry. A tweet aimed at musician Simphiwe Dana in 2011 telling her not to be a "professional black" was met with similar alarm.

An irate Zille told the Mail & Guardian she would not withdraw the comments about Du Plessis.

"I am tired of 'manufactured outrage' and double standards. But here's a deal: if no journalist ever refers to the race of anyone in the DA again, I will withdraw my use of the word 'complexion' in relation to Carien," she said. "And I would expect a little more outrage in relation to the racist hate speech I face every day."

Person behind the brand
The DA Gauteng south regional chairperson, Khume Ramulifho, conceded that it was probably not the best thing for Zille to fight on Twitter. "She tweets in her personal capacity because she's a brand, but sometimes it can affect the party negatively because some people cannot separate her from the DA," he said. "She could be saying the right thing, but the timing and the tone can come out badly."

Four other senior leaders the M&G spoke to agreed. "I thought it was wrong and unwise," one said.

The tweets are part of a larger problem facing the party in its fight to be seen as nonracial. Flip-flops over Bills that are key to transformation have also set the party back.

Last year, the party bungled a vote for the Employment Equity Amendment Bill in Parliament, which it backtracked on after an outcry from conservative critics.

One DA MP said that Zille often reacts too defensively to criticism and hastily backtracks, making the party look indecisive. Or she lashes out aggressively, further alienating potential voters.

Public faux pas
Similar problems have dogged the party in the run-up to elections, including its stance on the Israel-Palestine issue and land restitution. The most public faux pas was its failed marriage with Agang SA leader Mamphela Ramphele, which left both leaders with egg on their faces. Zille had pushed hard for the union despite obvious problems.

Another DA insider said Zille "generally doesn't like being criticised", citing her attack on its youth leader, Mbali Ntuli, who questioned the DA's recent jobs march to the ANC's headquarters on Twitter.

"Zille was reported to have strongly reprimanded Ntuli, calling her a prima donna and a princess," the insider said.

But worse for some party members is the seeming immunity enjoyed by Zille. A source close to the DA said the problem is a consequence of the environment.

"Helen has outlived everyone else senior in the organisation. Neither are there any independent voices willing to take her on after [former party strategist] Ryan Coetzee left."

Instrumental leader
She has been seen as instrumental in growing the DA's votes by nearly a million and changing the party's image substantially .

Eusebius McKaiser writes in his book Could I Vote DA?: "Zille's greatest achievement, I think, is to have managed to make the DA a place sexy enough for many young people, black and white, to start flocking to." But he pointed out that "Zille is starting to damage her own brand, her own legacy, and, most worrying of all, the foundations she built … unable to recognise when she is making disastrous leadership calls".

With elections looming in just over two months, Zille is putting the DA in a tenuous space as the ruling ANC seeks to exploit its obvious weaknesses. Indeed, the ANC took the opportunity to criticise the DA, with the ANC Youth League releasing a statement accusing it of attacking the freedom of the media, an issue the DA was more likely to take up with the ANC in the past.

The ANC head of elections Malusi Gigaba, himself an ardent tweeter, said Zille loses her cool at critical moments "betraying her own racist fundamentalism".

A political analyst and elections specialist, Ebrahim Fakir, said that she has probably been the party's most successful leader. "But, in a sense, I think she is becoming a liability." But he said the issue was unlikely to "hugely affect the party in this election".

The real question is what comes afterwards, when the party realises that it cannot carry on under a leader who stumbles from one faux pas to the next. The party favourites, Maimane and Lindiwe Mazibuko, are young and won't be ready come 2015.

"We may appoint an interim leader at the next conference," said one leader. "It's our only choice."