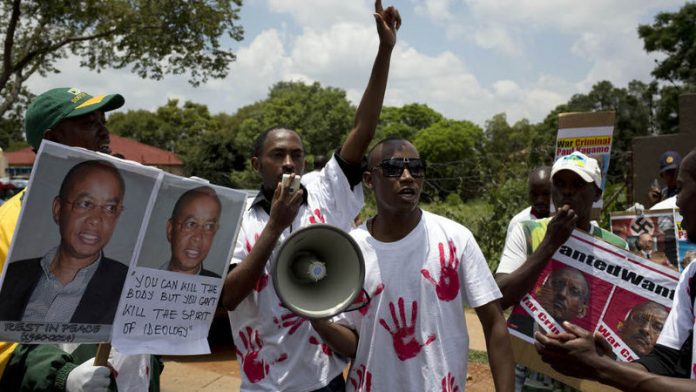 The fight just got dirtier and the tone of the accusations shriller. Rwandan President Paul Kagame's adviser has questioned the quality of President Jacob Zuma's leadership, while Kigali's foreign minister has accused South Africa of protecting "fugitives" and "terrorists". Nevertheless, Pretoria appears willing to mend the deteriorating relations.

Rwanda's Foreign Minister Louise Mushikiwabo took to Twitter this week to say that Pretoria has failed to address concerns Kigali has raised about people she called "Rwandan fugitives" living in South Africa.

"Good diplomatic relations [will be] better served by South Africa addressing illegal activities of protected Rwandan fugitives on their soil," she said, in a clear indication that there is no love lost between the two countries.

"Rwandan fugitives continue to engage in terrorist acts back home. Despite repeated promises from Pretoria, the problem is unresolved."

Diplomatic sources close to Kigali have told the Mail & Guardian that Rwanda raised its unhappiness with South Africa about exiled fugitives plotting against it at least five times in writing but received no support from Pretoria.

Negative dealings
In an opinion piece published in the New Times newspaper in Rwanda this week, Joseph Rwatagare – Kagame's adviser – said under Zuma's government South Africa dealt with the rest of Africa "in a largely negative sense, to the extent that some see it as meddling [in other countries' affairs] rather than providing leadership".

He also accused South Africa of providing "a home to people they know plan and sponsor terrorist activities in another African country".

Pretoria accused the Rwandan diplomats of being behind incidents of violence against exiled critics of Kagame's government earlier this month.

Rwatagare said that, whereas recalling an ambassador was a diplomatic display of anger and displeasure, expulsion was just "short of severing relations".

In what could be seen as a snub to Zuma, Rwatagare praised former presidents Nelson Mandela and Thabo Mbeki for their roles on the continent, saying the country has abdicated its leadership role under Zuma.

"The leadership capital that Mandela and Mbeki built, and that a strong economy guarantees, has been squandered. The result is that we are increasingly witnessing unprincipled diplomatic quarrels that do not serve the interests of ordinary South Africans."

A South African diplomatic source defended Zuma, saying he is acting on Rwanda because he is "not a coward".

Opponents of Kagame in exile in South Africa and other countries have accused the Rwandan president of having a hand in the deaths of dissidents, but Kigali has vehemently denied any involvement.

Rwanda has been unhappy with South Africa granting asylum and giving "special treatment" and "too much sympathy" to Kagame's former security strategists-turned-critics.

South Africa is prepared to repair diplomatic relations with Rwanda, but with a stern warning to Kagame that his government should stop assassinating its exiled opponents.

Pretoria will also not reaccept the three diplomats from Kigali who were expelled last week.

Spy chief murder
But South Africa has been unhappy since the January murder of another Kagame critic, former Rwandan spy chief Patrick Karegeya, in a Johannesburg hotel.

A Burundian diplomat was also kicked out for "collaborating" with his Rwandan counterparts.

Although Pretoria will not sever ties with Rwanda, Zuma is said to be preparing to read the riot act to Kagame. He is expected to provide intelligence evidence to show the alleged shady role of the expelled Rwandan diplomats. "Zuma is extremely unhappy…and very angry," said a diplomatic source.

Nyamwasa survived an assassination attempt in Johannesburg in 2010 and blamed Kagame's agents for that attack.

He was not home when the house was raided last week.

Damage control
Talks aimed at damage control between South Africa and Rwanda have already started and the M&G can confirm that South Africa's ambassador to Kigali, George Twala, has met with Rwanda's Mushikiwabo. And Zuma and Kagame are expected to have at least a telephonic tête-à-tête.

In another development Burundi arrested its expelled diplomat when he arrived in Bujumbura.

This arrest, say South African diplomatic sources, vindicates Pretoria because "the Burundian intelligence had its own independent information on this".

"The president of that country [Pierre Nkurunziza] called President Zuma … he is distancing himself from this," said a South African diplomatic source.

Justice Minister Jeff Radebe – who heads South Africa's justice, crime prevention and security cluster – told journalists on Wednesday that the South African government wanted to send a "stern warning" to anybody, anywhere in the world, that the country would not be used as a springboard for illegal activities.

But he added that, despite the expulsion of the envoys, diplomatic relations between South Africa and Rwanda remained intact.

Kigali believes that Pretoria is not acting "like a friend" by accommodating the government's opponents, who are accused back home of seeking to topple Kagame's government.

It's not the first time tensions between South Africa and Rwanda have threatened to derail diplomatic ties. In 2010, Pretoria recalled its ambassador to Kigali, Dumisani Gwadiso, who was questioned by Rwandan authorities on South Africa's handling of a failed assassination attempt on Nyamwasa.

The breakdown in cordial relations between the two counties could have important implications for future economic and trade relations. – Additional reporting by Andisiwe Makinana