Greece to sell off historic buildings to settle debt 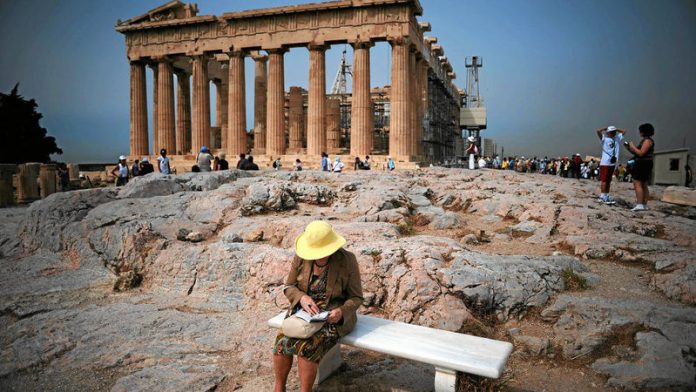 Greece's cultural gems have become the focus of renewed protest on the streets of Athens following the cash-strapped government's announcement of plans to include prime properties around the Acropolis, and other landmark buildings, in its privatisation programme.

Furious opponents marched through the city centre at the weekend to denounce the "illegal sale" of the country's heritage. More than four years into debt-stricken Greece's prolonged economic crisis, many described the step as the height of humiliation for a nation already hit by excoriating austerity and record levels of poverty and unemployment.

"The government is constantly trying to convey the message that the economy is a success story, but in reality that is not the case at all," said prominent left-wing campaigner Petros Constantinou. "The decision to put public buildings up for sale is not just proof that they are nowhere near reaching targets but plain wrong when they could be exploited for public benefit."

Under immense pressure to enact reforms for the release of a long overdue €10.1-billion aid instalment from international creditors, Prime Minister Antonis Samaras's fragile two-party coalition handed the real estate to the fund overseeing the sale of state assets (Taiped) last week. Among the properties are refugee tenement blocks built to put up Greeks fleeing the Asia Minor disaster in 1922, and culture ministry offices housed in neoclassical buildings in the picturesque Plaka district at the foot of the Acropolis that were erected shortly after the establishment of the modern Greek state. Both are widely viewed as architectural gems.

The move follows an equally controversial decision by the country's powerful archaeological council (Kas) to allow two of Athens's most significant ancient sites – the Stoa of Attalos in the ancient agora and Panathenaic Stadium – to be leased to companies for private functions.

Previously, requests for the commercial use of the monuments have been flatly rejected by the council. In 1998, Kas turned down an offer by Calvin Klein to raise funds to construct the New Acropolis Museum in lieu of showcasing his collection at the second-century CE Herod Atticus theatre beneath the Acropolis.

Greece's privatisation programme has been plagued by problems from the day bankrupt Athens became the ward of the European Union, the European Central Bank and the International Monetary Fund in May 2010. Protests have been such that the drive has been scaled back from raising €50-billion by 2015 to €11-billion by 2016.

The decision to sell off public assets invested with such historic significance has not only angered anti-austerity leftists. It has also raised howls of protest from reform-minded conservatives, with many wondering whether Greece is finally enacting what Germany's tabloid press has long taunted it to do: sell off its cultural heritage to pay off its monumental debt.

"The rush to sell these assets … raises serious questions [as to] whether they are being purposely sold on the cheap … to speed up the privatisation process," thundered Nikos Xydakis in the daily Kathimerini, lamenting the decision to sell off properties imbued with symbolic value. "Will the outrageous proposal put forward by the German magazine Bild, suggesting that Greece should sell or rent its island to cut its debt [next] come to pass?" he asked. – © Guardian News & Media 2014