Fears grow for missing after US mudslide 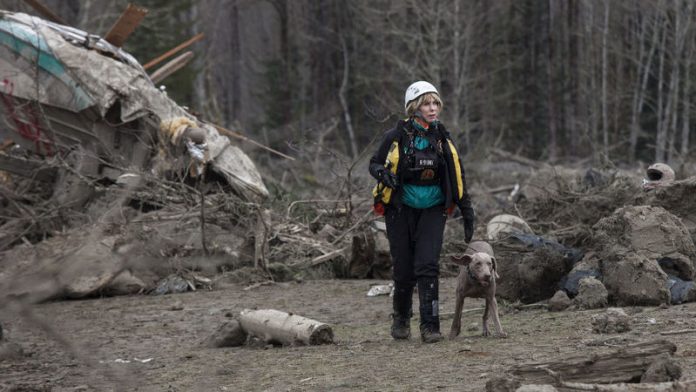 Officials said one more body had been found in a field of debris left behind when a rain-soaked hillside collapsed without warning last Saturday, unleashing a towering wall of mud onto the outskirts of rural Oso, about 89km northeast of Seattle.

The new discovery brings the presumed death count to 27 based on the number of bodies officials have reported finding even as the official toll of victims who have been found, recovered and formally identified remained steady at 17.

"We always want to hold out hope but I think we have to at some point expect the worst," Snohomish County Executive Director Gary Haakenson told a news conference after being asked if a large portion of the 90 people listed as missing were now feared dead.

"The crews are finding bodies in the field. It's a very slow process. It was miserable to begin with. As you all know, it's rained heavily the last few days. It's made the quicksand even worse," he said.

While fire officials directing search operations at the disaster site have reported slow but steady progress in recovering remains of victims, the official tally of the dead has changed little in recent days even as officials have repeatedly said the death toll could rise substantially.

County authorities say coroners have so far identified the remains of just 17 people, including an infant whose body was retrieved on Thursday.

Remains of 10 more people were reported to have been located in the 2.6 square kilometre heap of mud-caked debris over the past several days but as of Friday night had been excluded from the formal tally of lives lost.

Officials have revised the list only as each set of remains is identified by coroners, leaving the public mostly in the dark about the retrieval of more bodies. The task has been made harder because not all the victims are recovered intact.

"I don't think it's a secret that they are dealing with partial remains," said an official involved in the rescue operation, who asked not to be named.

Churches and fire stations
News of additional remains being located and recovered has been trickling out to family members of the missing and dead through word-of-mouth and other channels, however, thanks to community members working side-by-side with rescue teams in the search for more victims.

Area churches and fire stations have been go-to venues for members of the community seeking updates, said Gail Moffett of Oso, who lives 3km from the disaster site and works at a hardware store in nearby Arlington.

"I go home and talk to the source, because it's family," she said of the community network, including locally based rescue workers, she has tapped into for information.

Authorities have also allowed some victims' relatives onto the disaster site as the remains are recovered, and a moment of silence is observed, as occurred when the body of the infant was extricated on Thursday.

In one case, a volunteer member of the search team, Dayn Brunner, pulled the body of his own sister, 36-year-old Summer Raffo, from the mud pile on Wednesday. She was driving through the area when the slide buried her in her car.

Brunner (42) took a day off to grieve and rest, and then returned to the debris field on Friday to resume the search.

An estimated 180 people lived in the path of the landslide, and the list of missing, once at 176 or more, has remained steady at about 90 since Wednesday.

Hopes fade
Authorities have said some of those killed might never be found, and on Thursday braced the public for news – still yet to come – that the number of dead would increase substantially in the next 24 to 48 hours.

Officials have so far publicly identified five dead, while withholding the names of others listed as dead or missing. But about 40 people have been identified on a local blog site as potential victims, including several members of one family.

All of those discovered alive in the mud were rescued by helicopter within the first few hours after the landslide, and rescuers have found no further signs of life, officials said.

"They found the easy bodies in the first few days. The rest of them are probably buried. That's what I was told," said Michajla, his face and fingers caked in mud.

Local fire district chief Travis Hots said rain and wind sweeping the area on Friday was working against the round-the-clock search efforts. A flash flood alert was posted for the county, extending through the next three days.

With hopes for finding any additional survivors continuing to fade while uncertainty over the fate of dozens more lingers on, the mood among the community has grown grimmer.

Bernie Tamez (39) said he was comfortable that officials were dealing with the community forthrightly, despite the dearth of tangible information.

"They're keeping us informed," said Tamez, a machinist who took the week off to volunteer in Darrington, where he lives.

Meanwhile, residents like 45-year-old Larry Dwyer who escaped the slide marveled at their luck.

"We were driving on that exact stretch two weeks ago. We were right there," Dwyer said as he watched his three sons wave signs ushering motorists toward a food drive at an Arlington market on a rainy Thursday evening. "That's why we're out here right now. It's a karma thing. When it's not you, you give." – Reuters