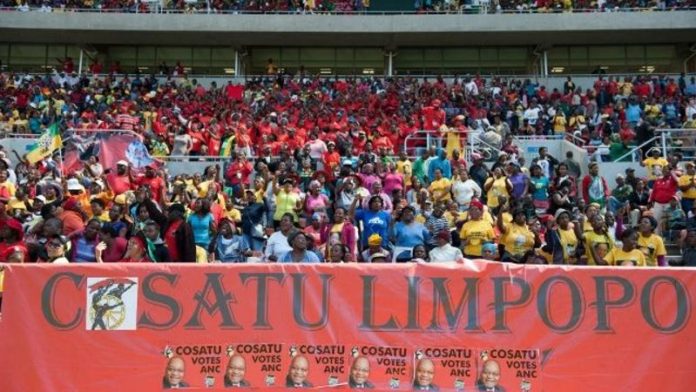 In Polokwane, tens of thousands gathered for a Workers’ Day rally in a World Cup stadium on Thursday, a gathering that was more an election rally for the ANC than a Workers’ Day celebration for trade union federation Cosatu.

But in Port Elizabeth, relegated to the obscurity of the run-down Dan Queque stadium in a stronghold of the anti-Zuma National Union of Metalworkers of SA (Numsa), Cosatu general secretary Zwelinzima Vavi and Deputy President Kgalema Motlanthe addressed a very different event.

As he had previously pledged, Vavi studiously avoided contradicting – at least in outright fashion – a Cosatu executive committee decision that the federation should honour its alliance commitment by campaigning for the ANC. But Vavi first modified the script prepared for him, then went off it entirely – expressing no support for Jacob Zuma and only modified support for the ANC, and calling on workers to unite to grasp and exercise political power.

Motlanthe, who is likely to be even further removed from any influence or authority after the elections, did not cheer for his party in convincing fashion either. He instead expounded on the importance of workers’ rights, and cautioned against accepting “the small gifts” as a gateway to corruption.

Vavi initially stuck to the official speaking notes prepared for Cosatu officials, albeit in isiXhosa, leaving out exhortations to vote for the ANC and details of the gains the ANC has made. But, with an appreciative if small crowd, he eventually abandoned his prepared remarks (which substituted the official “Vote ANC on 7 May” for simply “Vote on 7 May!”) in favour of a revolutionary tone reminiscent of Julius Malema, sometimes verbatim, and far left of the ANC. “We want economic freedom in our lifetime!” Vavi thundered in a speech that also saw a call for a “people’s camp” and “radical economic transformation”.

Unite for change
In a disappointment to many Numsa members in the audience, Vavi provided no immediate alternative to voting for the ANC, veiled or otherwise, instead expanding on the “catastrophe” of unemployment.

He also condemned the “paper alliance” in which Cosatu’s influence is not felt in ANC or government policy, and came out swinging against both those who would criticise him for not campaigning against the ANC and those who would wish to call Numsa to order.

If he were to heed the Numsa call to effectively oppose the ANC in the elections, Vavi said, he would be the general secretary of just that one affiliate union, rather than the broader federation. And, he hinted, unity could bring change.

“We are uniting the unions,” he told the crowd. “We are uniting Cosatu. All of it. We are debating our challenges as workers … While those debates are still going on, the existing Cosatu policies [which call for support for the ANC] bind all of us … If you are not happy with the Cosatu position, then you must go to your unions … insist that the national congress be held as soon as possible so that workers can have the opportunity to discuss these challenges.”

In Polokwane, the men with whom Vavi shares an awkward ­camaraderie made up for the general secretary’s silence. “Even if Vavi is not here physically he is here as a part of the leadership collective,” said a local union branch chairperson, who asked not to be named. “This is about the whole of Cosatu, not an individual.”

Cosatu members were bussed to Polokwane largely from across Limpopo, the heartland of the Economic Freedom Fighters’ Julius Malema, but some came from as far afield as KwaZulu-Natal, Zuma’s undisputed home turf. Rallygoers described a vetting-free process, with discrimination against neither Zuma’s allies nor his enemies.

In Polokwane, the unity of Cosatu – at least between its president Sdumo Dlamini, considered to be of the Zuma camp, and Vavi – was not evident.

“Thank you comrade president for standing firm behind Cosatu when we were being shaken, when we were being told lies by individuals,” Dlamini told Zuma. He said Cosatu trusted the ANC to “close this gap” between Cosatu demands – such as the banning of labour brokers and ANC policy as captured in the National Development Plan.

In Port Elizabeth, Vavi told workers they had to take control of their own destinies. “You must do this, you,” he said.

‘They only help themselves’
Outside the Port Elizabeth city hall a small group of inner-city homeless people form a ragged line in front of the folding tables being set up for a soup kitchen. Local non-profit organisation Love Story serves hot meals five nights a week: tonight, a chilly night ahead of Workers’ Day celebrations, it is samp and beans.

As some among the group of 60 go back for second and third servings, grilled chicken from Nandos, fresh salad and dainty finger foods roll past them on trolleys, destined for the memorial lecture on union leader John Gomomo due to be delivered by Zwelinzima Vavi. The food is for a group that turns out to be half the size of that eating at the soup kitchen.

Inside, Vavi remarks on corruption within trade union movements and elsewhere, and decries stark inequality. Outside the hall, those inequalities are playing out starkly. “I’m gonna vote DA. Or EFF. EFF! EFF!” shouts a woman, who identifies herself only as Doreen, at a small huddle of ANC and Cosatu volunteers nearby, stopping her taunting only to chew.

Doreen, and others taking advantage of the soup kitchen, can’t find work because of “this government”, they say. But their anger is indiscriminate and omni-directional: the ANC, its alliance partners, and depending on who you talk to, every other political player, including Cosatu, are not around to help them, they say. “They only help themselves.” The billboard for the presidential infrastructure project that looms over the scene, with its proclamation of career opportunities, does not feature in their minds.

‘The president told me I can get a house’
Anna* is in a wheelchair. Polio rendered her legs useless as a child, yet today she beams. She watches the Workers’ Day stage from the green pitch at the Peter Mokaba stadium in Polokwane.

Thousands of workers, mainly from Limpopo and KwaZulu-Natal, are at her back. Moments ago security wheeled her on to the pitch to shake President Jacob Zuma’s hand. “The mayor and the councillors came to my house and asked me to come here,” says Anna.

Over the roar of 1  000 workers, she whispers to Zuma that she lives in a shack. Her neighbours abuse her and she wants a house, please. “Zuma said he would tell the premier [Stan Mathabatha] about me so that I can get a house,” she says.

If he keeps his promise, it will not be Anna’s first meeting with the Limpopo premier. “He loves me,” she says, boasting about his regular visits to her shack, media in tow.

Yet the abuse continues, far away from the help of her two children who work in Johannesburg. “My neighbours hit me. Sometimes they kick me. But I am not sad. God is good. And I am so excited to meet Zuma. This is a wonderful day.”

* Not her real name.