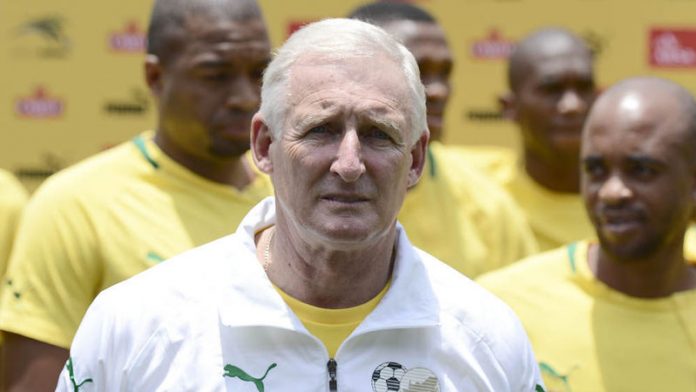 Coach Gordon Igesund says his Bafana Bafana squad to play Australia and New Zealand has been ravaged by withdrawals, with 11 from the original 18-man squad not taking part.

“There have been a couple of withdrawals unfortunately. Of the 18 players called up, 11 have withdrawn through injury and clubs not wanting to release players,” Igesund said at OR Tambo International airport on Tuesday. “With some of the players, we only found out last night [on Tuesday that they had withdrawn].”

Bafana are due to play Australia in a friendly match in Sydney on Monday, which falls outside a Fifa-sanctioned date as the Aussies fine tune their preparations for the World Cup. Four days later, Bafana are scheduled to play New Zealand in Auckland.

“In their place I’ve called up Hlompho Kekana for ‘KG’, Senzo Meyiwa for Khune, Thuso Phala for ‘Shabba’, Thato Mokeke for Masilela, Kermit Erasmus for Parker and Eric Mathoho for Xulu. I also called up Vilakazi to replace Jali, but then he later got injured. In his place I’ve called up Teko Modise instead.”

“If I look at the players that are missing, nine of them would’ve started the match. It becomes difficult with only two days to prepare.” The squad was originally scheduled to leave for Australia on Wednesday, but will now leave on Thursday as team management scramble to secure visas and officials documents for the late additional players to make the trip. – Sapa