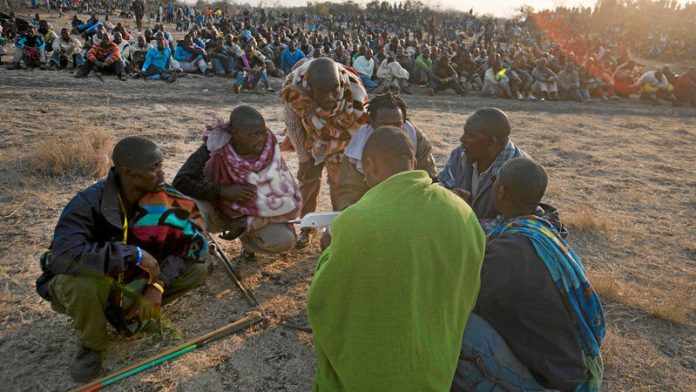 There were sniggers and suppressed laughter at the Marikana commission on Friday, when Mr X asked the chairperson to halt the commission so he could consult his traditional healer.

This came just after an extended tea break was held because the witness claimed to feel sick. “Chair, I’m making an application that these people are using muti against me. I’m asking for permission that I may see my sangoma,” said Mr X, accusing the miners who are attending the commission of using muti to make him sick during his testimony.

Chairperson, judge Ian Farlam, granted the stand-down to more sniggers. One of the widows of a deceased miner could be heard expressing her disgust to those around her: “I want that same muti because maybe it’ll raise my husband up [from the dead].”

Farlam eventually granted an adjournment until Monday, when Mr X’s testiomny will continue.

Earlier, still having his evidence led by advocate Frank Mathibedi, on behalf of the South African Police Service (SAPS), Mr X revealed more details about the rituals that the striking Marikana miners took part in in August 2012.

Burnt alive
He told how one of the two inyangas took a group of miners down to the river, where they stripped down and stood in the river while the inyanga poured muti into their mouths.

He shared details of how two sheep were wrapped in sheets and burnt alive on the koppie. The burnt sheep, blood and water was mixed together to make muti and applied to cuts made on the miners’ bodies with razor blades.

According to Mr X, the miners who took part in these rituals had to abide by a number of rules in order to render the muti effective, namely abstinence, not walking near water, not to eat pork, sheep or fish, not to wear watches, necklaces or gold teeth and not to carry any silver money. They were also told by the inyangas “that we were not to fire before the police started shooting … then we would be capable of being shot. But if we did not do so the police guns would not be able to shoot us,” he told the commission.

The Farlam commission is investigating the events that took place at Marikana in August 2012, when 34 striking miners were killed by police and more than 70 were injured.