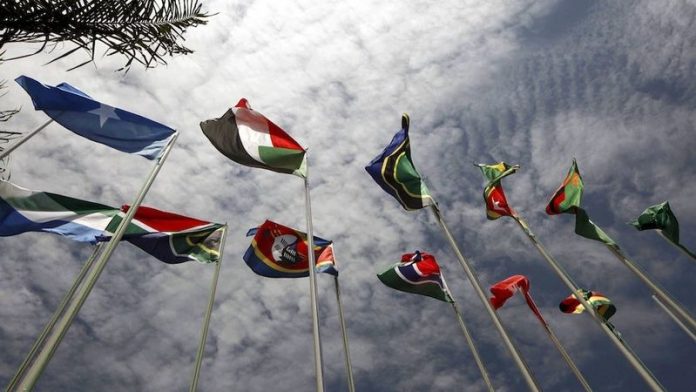 If you want to learn more about the Pan African Parliament’s plans to celebrate its 10th anniversary this year, avoid its official website. Its news section’s last update was in December last year when former president Nelson Mandela died – it features an undated photograph of 11 PAP staffers in “Nelson Mandela Day” T-shirts.

Below this photograph is another undated one, again of staffers, this time sitting under a tree at an undisclosed venue checking their cellphones. This picture has a longer caption about the “staff workshop on performance-based management” that was “facilitated by the African Union [AU] human resources office”.

The link to its promised “live session” on its webcast page is dead. The only mention of the Parliament’s 10th birthday is in a banner advert that you click on, to no avail.

The PAP was created a decade ago to provide a common platform for African peoples and their grass-roots organisations to be more involved in discussions and decision-making on the problems and challenges facing the continent.

Its aims include “facilitating the effective implementation of the policies and objectives of the AU; promoting the principles of human rights and democracy in Africa; encouraging good governance, transparency and accountability in member states; and promoting peace, security and stability”.

It also intends “to familiarise the peoples of Africa with the objectives and policies aimed at integrating the African continent within the framework of the AU, as well as facilitating co-operation among the continent’s regional economic communities such as the Southern African Development Community (SADC) and the Economic Community of West African States”.

To achieve these ambitious and noble ideals, the PAP had five years (until 2009) to evolve into a full legislative body with members elected by universal adult suffrage. Yet it was only in January this year, after 10 years, that the draft protocol to turn the PAP into a full legislative body was submitted to the Summit of Heads of State after reviews by AU member states, their justice ministers and attorneys general.

Judging by the snail’s pace at which decisions to promote democracy are taken at the AU, it may still be a long time before it happens.

The disbanding of the SADC tribunal in 2012 provides a clear indication that there is not enough political will to create supranational institutions that leaders view as superseding their national authority by empowering the common people of the continent.

It is therefore not surprising that there is not much hype about the decade-long existence of the PAP, and most Africans are not even aware of its presence.

Ten years of existence is a good time to reflect on and evaluate the relevance of the PAP. The Parliament has proved that given the necessary resources and support, it can fulfil its mandate without fear or favour. A case in point is its 32-member election observer mission to Zimbabwe during the violence-marred presidential run-off of June 2008.

The mission concluded that the atmosphere in the country at the time “did not give rise to the conduct of free, fair and credible elections”.

It called on SADC and AU leaders to “engage the political leadership in Zimbabwe into a negotiated transitional settlement”. This gave the two bodies the mandate to facilitate the Global Political Agreement that brought some stability to Zimbabwe.

The Parliament regularly interacts with civil society organisations during its sessions and insists on gender parity in the delegations of member countries, among other progressive initiatives.

Limited capacity
Yet, despite its best efforts and its intentions of doing good work, the PAP continues to face challenges that make its mission almost impossible.

Resources to undertake programmes are limited and often it relies on donors, which makes it vulnerable. Its capacity is therefore very limited, a problem compounded by the fact that members come from very different political cultures and backgrounds that are rooted in varied colonial and post-colonial experiences, often lacking democratic institutions and independence in decision-making processes.

In fulfilling its oversight role, the PAP has to walk a very tight rope: coexisting with national and regional governing bodies in a manner that will not derogate from or be perceived as eroding their powers or sovereignty. Also, a formula to execute its intention to have members elected by universal suffrage does not yet exist.

In spite of that, the PAP, if it develops into a fully fledged legislature with binding powers on all African states, may be an important platform to popularise the AU’s Agenda 2063 – an integrated, prosperous and peaceful Africa driven by its own citizens and representing a dynamic force in the global arena.

And to achieve this, our political leaders must exude political will to get the PAP working because no matter how good their intentions, the people will only take it seriously when those who established it begin to do so. We need more action from the “people’s Parliament.

Webster Zambara is a senior project leader for Southern Africa at the Institute for Justice and Reconciliation, Cape Town

The voice of a billion Africans

The Pan African Parliament was launched in March 2004 by article 17 of the Constitutive Act of the African Union to become its legislative body.

It therefore represents the 1.1-billion people of Africa. Initially the seat of Parliament was in Addis Ababa, Ethiopia (where the AU headquarters are), but was later moved to Midrand, South Africa.

Currently, the PAP consists of 205 members of Parliament instead of 245, comprising five from each national Parliament of the 49 countries that have ratified the PAP’s protocol. Its full capacity is 270 members once all the 54 AU member states are represented.