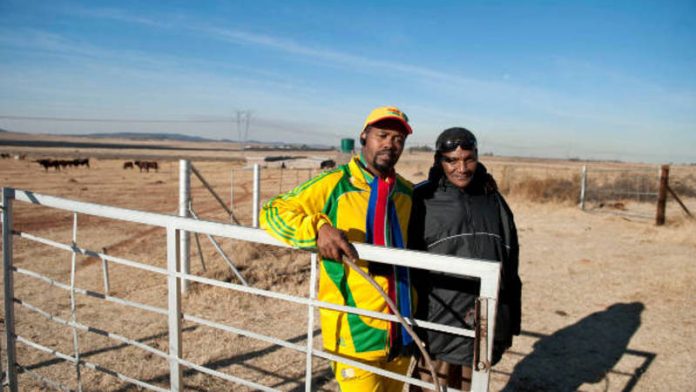 The man in charge of Thandi Modise’s controversy-dogged farm, Modderfontein, near Potchefstroom, was Abdul Mogale, her former boyfriend and an ANC councillor for the Ekurhuleni metropolitan municipality, neighbouring farmers told amaBhungane this week.

The former romantic relationship between Modise and Mogale was confirmed this week by Modise’s spokesperson Neo Moepi.

A neighbouring farmer, who asked not to be named, also said that he had met Modise shortly after she bought the farm and that she had told him she was buying it for Mogale.

The neighbours and their employees said that, to their knowledge, Mogale was not a full-time resident manager of the 488 hectare farm that Modise purchased with a R4.9-million Land Bank loan in 2011, and that the farm had in effect been run by workers.

Barren: The farm and livestock that were allegedly neglected. (Photos: Oupa Nkosi)

A neighbour said he had seen Mogale five or six times in three years, but he appeared to be in charge. Workers also contradicted Modise’s claim that she visited the farm fortnightly, saying that she made an appearance there at intervals “of six to eight months”.

A neighbouring employee also said that one of Modise’s workers had come to beg for maize porridge in June after being hired in May and not receiving his wages.

The worker in question had also alleged that his predecessor at the farm had experienced difficulties in receiving payment and food. These were some of the indications of long-term neglect and under-resourcing of the farm picked up by amaBhungane on a visit to the farm this week.

Modise ‘wasn’t really involved in the farm’
Facing fierce criticism over the death of up to 80 animals and euthanasing of a further 117 by the Society for the Prevention of Cruelty to Animals (SPCA) after they had been denied food and water, Modise claimed this week that she had left the farm in the care of a full-time manager and that she regularly visited the farm.

Survivors: These cattle were left at the farm. Other animals were removed by the SPCA.

She said that the problems with the livestock had occurred when the manager – whom she refused to name – asked to take leave two weeks ago to attend to a family matter and failed to inform her that he had not returned.

Moepi confirmed that Modise had had a romantic attachment with Mogale “until about two years ago”, when they had broken it off. “She wasn’t really involved in the farm,” said a neighbouring farmer, who asked not to be named.

Moepi denied that workers had been underfed and underpaid, or that they had begged for food.

He also denied that Mogale was the farm’s manager, saying that he had only visited the farm accompanied by Modise. Moepi declined to give the name of the current manager.

Neighbours said Mogale introduced himself to them as the manager and gave them his phone number. The number corresponds with the number for him on the Ekurhuleni council website. It now seems to be out of order.

Other signs of long-term neglect seen by amaBhungane, and alleged by neighbours, include:

Amabhungane interviewed a worker on a nearby property, who said he understood Modise’s workers – originally four but in the end two – were managing the farm.

He said that on about June 13, a month after he was hired, one of Modise’s employees, a Zimbabwean called “Nina”, had told him that he had not been paid and asked him to give him mealie pap.

“I didn’t have enough, so he went to workers on other farms to beg for food,” said the neighbouring farmworker.

AmaBhungane was unable to interview Modise’s former employees as they have disappeared and no one in the area knows what has become of them.

Moepi said that the allegations of long-term neglect and the ill-treatment of workers were “absolute lies and hearsay”.

“It is news to us,” he said. “If it’s true that the workers visited neighbouring farms, perhaps they went for social reasons.”

Regarding the role of Mogale, he said that workers at Modderfontein were given his number in case they could not reach Modise.

He claimed that there was a permanent resident manager on the farm, but refused to name him.

Before the crisis, Slim said that he had intermittently visited the farm from his home in Edenvale, Johannesburg, to pay the workers and bring them groceries.

Claims that the workers were underpaid and underfed were “absolutely not true; they were fine and didn’t have any problems”, he said. He claimed to have visited the farm on June 25 to bring provisions to the workers, who were “fine”.

Meanwhile, amaBhungane has obtained property documents for Modderfontein showing that the Land Bank loaned Modise at least R4.9-million to buy the farm in March 2012. She was North West premier and the ANC deputy secretary general at the time.

Citing client confidentiality, Land Bank spokesperson Congress Mahlangu declined to discuss details such as the full loan amount, the repayment terms and how it came to be awarded to Modise.

Mahlangu said it was a retail commercial loan. These are usually awarded to small or medium-sized businesses “and farmers that have progressed beyond the development stage”, according to bank documents.

That she was a powerful and politically connected individual was of no concern to the bank. “Every South African citizen is eligible to apply for financial assistance from the bank. She met all the criteria set out by the bank at the time she applied for the loan, including affordability and the required security for the loan.” Mahlangu said.

Pressed on the bank’s view of the state of Modise’s farm, he said: “We are concerned with the recent developments. The bank will investigate the matter and understand what the challenges are so that it can decide on how to intervene.”

Mahlangu said that the bank generally set “stringent measures” for loan recipients, which it enforced through regular site visits. It visited Modderfontein in March, he said, but the outcome of this was a private matter between Modise and the bank.

He said: “We are observing the intensive investigations [being conducted by] official bodies, such the SPCA. In the process of that investigation, I am sure the bank will also be consulted, where we would obviously be requested to make our submissions.”

Despite the apparently poor state of her operation, Mahlangu said Modise was up to date with her loan repayments.

Modise and Abdul Mogale were not immediately available for comment on Thursday.

Pauli van Wyk is a Beeld reporter currently doing an internship at amaBhungane.

Pauli van Wyk
Pauli van Wyk is a Scorpio investigative journalist. She writes about the justice cluster, state-owned companies, state politics and the inescapable collision course they're on. Pauli cut her teeth at Media24. She became a journo at Beeld, was trained by the amaBhungane Centre for Investigative Journalism and joined Mail & Guardian's investigative team before becoming a member of Scorpio.

Mapisa-Nqakula elected as speaker of parliament

No board for youth agency just yet, as parliament has not approved report

Panel on Mkhwebane was proof of parliament’s caution, court hears