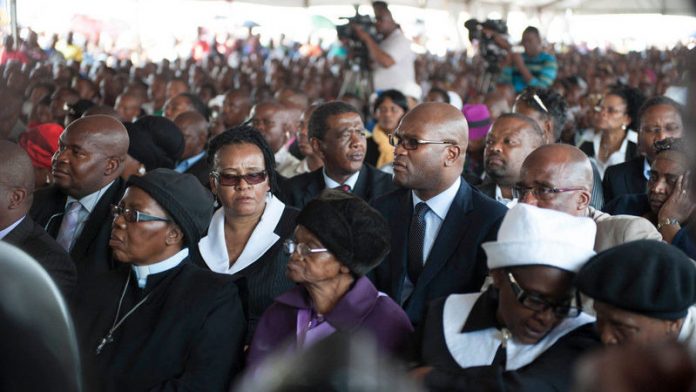 Former police minister Nathi Mthethwa faced accusations on Tuesday that he bowed under political pressure to intervene in the situation at Marikana in August 2012. He was also accused of misleading the commission.

The Farlam commission is investigating the deaths of 34 people and injuries of over 70 at the hands of police during an unprotected strike at Lonmin Marikana in August 2012.

In his cross examination of Mthethwa, advocate Dali Mpofu, who represents the injured and arrested miners, accused him of giving in to political pressure and trying to conceal his “improper communications” from the commission. Mpofu also said that he will be recommending to the commission that Mthethwa be “charged with murder as accused number two”.

Mpofu pointed out that in Mthethwa’s first statement, he had not mentioned that he had contacted the North West provincial commissioner, Lieutenant General Zukiswa Mbombo, after receiving a phone call from ANC deputy president and Lonmin board member at the time, Cyril Ramaphosa. It was in this call that Ramaphosa allegedly expressed concern about the apparent lack of police members on the ground at Marikana.

But Mthethwa claimed that this was merely an oversight and that after looking through his own phone records, he recalled his conversation with her.

“There was no reason to conceal anything, because voluntarily I went around to get my phone records and I gave it to this honourable commission,” Mthethwa said.

But Mpofu argued that it was only after the evidence leaders had unearthed certain information that Mthethwa added his conversation with Mbombo to his supplementary statement.

Both Mpofu and Association of Mineworkers and Construction Union representative advocate Heidi Barnes pointed to the fact that both the provincial and national commissioners had also tried to conceal their communications with the police minister during the week in question in August 2012.

Mpofu asked the minister: “Would it strike you as a coincidence that the provincial commissioner forgot in her first statement that she had spoken to you?”

Later in the day, Barnes, produced evidence that showed how national police commissioner Riah Phiyega had changed her original statement in order to seemingly protect the police minister.

“We will argue that the national commissioner was eventually prevailed upon to adopt the misfit page because it removes the reference to yourself,” she told Mthethwa.

Mthethwa denied having pushed either commissioner to change their statements.

Mpofu argued that it would’ve been impossible for Mthethwa to forget that he had phoned Mbombo, when that was the first thing he had done after his phone conversation with Ramaphosa. Mpofu also said that it would be difficult for Mthethwa to forget this fact when it was a deviation from his normal behaviour of calling the national commissioner first when an issue was brought to his attention.

It was at this point that Mpofu scathingly accused Mthethwa of attempting to mislead the commission.

“What we’re going to argue is that your denial of having exerted any pressure whatsoever … cannot be sustained … you were the conduit through which the political pressure from Mr Ramaphosa was transmitted to General Mbombo, and then transmitted to the killers [police shooters],” Mpofu told Mthethwa.

Although Mthethwa conceded to understanding Mpofu’s statement, he disagreed with it. He explained that it was his duty to follow up concerns relayed to him about Marikana, but that he had been satisfied with Mbombo’s explanation of what she had planned for the operation and that it was not in his mandate to make decisions on an operational level.

Mpofu then criticised Mthethwa for mentioning Ramaphosa’s name in his conversation with Mbombo. “You knew very well by mentioning the name of the caller it would achieve your intended purpose, which was to transmit the pressure towards the operational management.” But Mthethwa said it did not matter what he had said. “For me it’s no big deal who is calling.”

Mpofu’s cross examination of Mthethwa ended with a bombshell: “I’m going to argue that due to your involvement in the chain of political pressure, which we will argue was causally connected to the massacre happening at a particular time on a particular date, due to the role you played in that resulted in the deaths of 34 people and injured 80 or more, that you and other people that we have listed should be charged with the murder of those people for whatever role you may have played in the events that led to their deaths and injuries. We have you on the list as accused number two.”

Mthethwa’s cross-examination ended on Tuesday. The commission will continue on Thursday when Mr X takes the stand again.