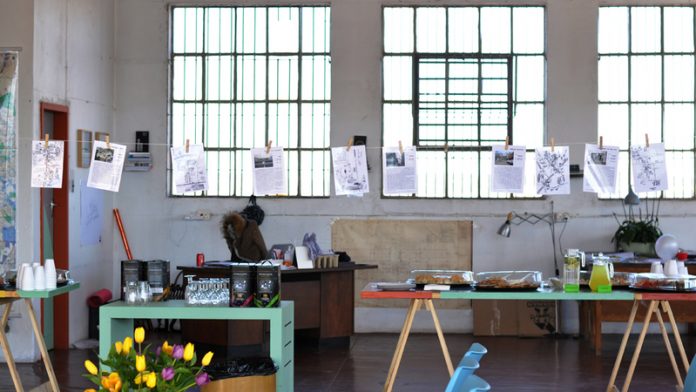 Alice Cabaret, the director of Grind
“I have always been fascinated with urban transformation and innovation,” says Alice Cabaret, an urban strategist with an MA from Sciences Po University in Paris.

Two years ago, Cabaret came to South Africa to facilitate the reconversion of abandoned buildings into affordable housing in the inner city of Johannesburg, where she caught the attention of Propertuity, the development company behind the Maboneng Precinct. She is now the company’s full-time urban strategist, as well as the director of Grind, a new organisation focused on Global Regeneration Initiatives for Neighbourhood Development, which she started earlier this year.

The idea for Grind came about through conversations with Jonathan Liebmann, the chief executive of Propertuity, and their realisation of the lack of connection between the different urban regeneration initiatives around the world, inhibiting the promotion of skills and sharing of experiences in this domain. They conceptualised Grind as a response to this and the organisation began to take shape as an international platform aimed at bringing together urban regeneration stakeholders to engage in urban innovation through residency programmes at local Grind Studios, the first of which is in Maboneng on the top floor of the future Situation East building on Fox Street.

Cabaret says the Grind Studios encourage the implementation of innovative and inclusive urban projects in areas that are undergoing regeneration, like the Maboneng Precinct, which has received much international attention and become a model for urban regeneration within an African metropolis context.

In response to the contentious gentrification debate that hangs over the precinct like a fog, Cabaret queries the inherent meaning of the term, wondering instead whether gentrification always has to imply displacement or whether it can rather be understood as the succession or synergy of population groups.

“At Grind we promote events that bring community members of all racial, socioeconomic and geographic backgrounds together,” she says. This promotes an alternative way of experiencing the city that contrasts the ‘gated’ communities that have become a standard feature in other parts of Johannesburg. “Through urban regeneration we can strive for a progressive, integrated urbanism.”

This is precisely where the Maboneng Grind Studio residency fits in. As an international platform, the organisation attracts established stakeholders involved in creative urban regeneration projects (developers, municipalities and local communities) as well as students and private practitioners from all around the world. The residents spend three months living and working in the Maboneng Precinct, developing their ideas and projects within the specific contextual dynamics of the area. These are then presented to the public as well as shared with international stakeholders with an ultimate goal of influencing regulation guidelines and practice.

Grind is involved in projects in Rio de Janeiro, Accra, Durban, Paris and Panama and has partnerships with local and international universities, including Stanford and Sciences Po. The Grind Studio in Maboneng, Cabaret tells us, helps Johannesburg position itself as a leading metropolis in terms of urban innovation and as an inspiring example in terms of urban problem-solving on the global scene.

Casting director Candice Hatting founded the agency after becoming frustrated at being unable to find the type of talents her clients were asking for. “I constantly needed to street cast to crack it, so I decided to make a book of our own that was carefully curated with some of my most interesting friends,” she says.

The idea with My Friend Ned was, and still is, to cut away all the smoke and mirrors. Instead of a traditional test shoot, everyone is photographed in a plain white T-shirt with as little make-up as possible. Hatting says their goal was to “strip it all down and make an agency that was brave enough to let their differences really shine through”.

Alexander Karakashian investigates the relationships between natural environments and the aesthetics of landscape painting. Yael Feldman is interested in painting as a form and is preoccupied with ordinary objects and sites that show signs of neglect. Daniel Nel creates expansive images with the aim of articulating more than the sum of their parts through intertextual inference. The work of Mia Chaplin is highly expressive and through landscapes and portraits communicates a feeling of estrangement. Heidi Fourie is fascinated by the fine balance between control and uncontrollability as well as order and chaos that comes into play when painting an image. Working from old family photographs, Alexia Vogel considers all of her paintings landscapes, even the most abstract ones. And finally, Kirsten Lilford (shown below) imparts an uncanny and slightly sinister tone into snapshots of everyday family outings and scenes of the suburban idyll.

While each artist is busy honing their distinctive still, a common theme throughout their work is an acute reflexive understanding of the act of painting – of mark making, of traditional modes and of the context within which they’re working.

Claudette Schreuders: It’s in the Ambiguity
Claudette Schreuders’s stocky wooden figures stare blankly into the middle ground and offer the viewer nothing obvious while simultaneously hinting that there is much buried just beneath their enamelled surfaces.

Schreuders embraces this and other ambiguities in her work. The mythological mermaid creature that reoccurs symbolises this, as she explains: “I like the idea of a mermaid as a kind of lost girl, not at home in either land or water.”

Schreuders’s work has been exhibited widely locally and abroad, and is part of major collections. While her sculptures are static, they hint at an inner life. “People see motives and emotions in the figures that I don’t consciously put there,” says Schreuders, who keeps the faces of her sculptures quite neutral. “It’s a device that makes them more open and interesting.”

New techniques and themes in Russell Abrahams’s illustrations
Russell Abrahams is a young illustrator completing his final year of study in Cape Town. Since he began his studies, he has been honing his craft with an enthusiasm and zeal that saw him selected as one of Design Indaba’s emerging creatives.

In the interim, his style has progressed significantly – new textures, techniques, colour schemes, subjects matter and influences are all present in his recent work. One such example is his ongoing Totem series, through which Abrahams tackles important social issues that South Africans are facing.

His country influences his work in many ways, even though this influences doesn’t always manifest itself in a way that is immediately obvious. “Most of the time I draw inspiration from people and pop culture. I love observing how people walk and talk,” says Abrahams, whose desire to keep on learning, experimenting and bettering his skill makes him one to keep an eye on going forward.

For more local creativity, go to Between 10and5.