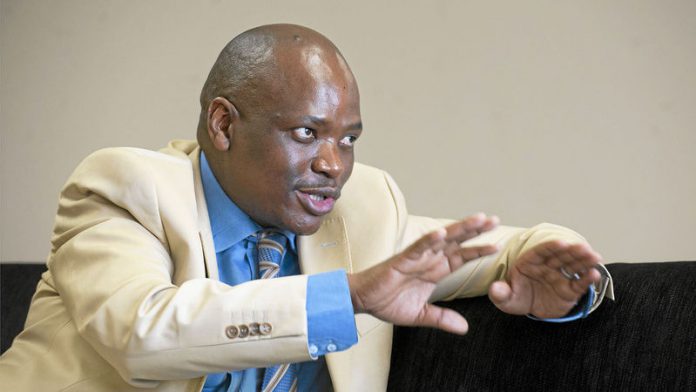 Hlaudi Motsoeneng appeared unperturbed by the drama that followed him to Cape Town, where he faced court action by the DA to have his permanent appointment as the SABC’s chief operating officer set aside.

Dressed in a dapper blue suit, Motsoeneng was met outside the Cape Town high court on Tuesday by a rowdy crowd of supporters, made up of non-governmental organisation Sis’kona activists, ANC members, church goers and traditional healers.

Many stayed outside on the road to sing and chant for his benefit while the case kicked off inside.

In time, the police arrived with shield and bullet proof vests, and lined the top steps of the court, as a precautionary measure, they explained.

The sounds of protests on the road penetrated the thick walls and could be clearly heard in court 9, lending an air of the bizarre to the case.

One of the most common refrains was “Hands off Hlaudi.” Yet the man at the centre of all this attention was still smiling and looked completely non-plussed. “How am I feeling? Yes I am quite calm,” Motsoeneng said inside court. “I’m happy. I’m always grateful for all the support.”

Bishop Derick Mtsolo of the Litha Methodist Church of South Africa said people from many religious sectors and traditional leaders and healers had descended on the court to show their backing for Motsoeneng. Accompanied by a large delegation, Mtsolo squeezed into the tiny court room in a show of support.

“The reason why we are coming here to give full support to our brother Motsoeneng. He is our colleague, he is a pastor, and also we believe as the religious sectors that no one in this country must be discriminated against about the level of their education,” Mtsolo told the Mail & Guardian. “In apartheid years, they oppressed us not to have education and we believe this man is fit for his job. He has been so long at the SABC, and now he is experienced to do the job. “

Mtsolo said President Jacob Zuma should also not be discriminated against because of his lack of education as he had been chosen by God.

Right man
Motsoeneng, said Mtsolo, was highly experienced and they felt him to be the right man for the post.

When Judge Ashton Schippers walked into the courtroom, Motsoeneng squeezed onto a bench and landed up beside the Public Protector’s chief investigator in its good governance and integrity unit, Advocate Nkebe Kanyane.

Kanyane was present because the Public Protector’s office was cited as the ninth respondent in the case by the DA, after the release of Thuli Madonsela’s damning report, titled When Governance and Ethics Fail.

In the report she released in February, Madonsela said that Motsoeneng had irregularly received three salary hikes in one fiscal year, raising his salary from R1.5-million to R2.4-million. Madonsela also accused him of irregularly increasing the salaries of some staff and purging others, leading the public broadcaster to lose millions of rands in settlements and court action.

To top it off, Madonsela said Motsoeneng had committed fraud by claiming he had a matric certificate on an application form.

Despite the recommendation by Madonsela that Motsoeneng be replaced in his post, Communications Minister Faith Muthambi announced Motsoeneng’s permanent appointment in July.

Advocate Anton Katz, for the Democratic Alliance, described the SABC board’s and the communications minister Faith Muthambi’s actions in appointing Motsoeneng to a permanent position as COO as having followed “irrational procedures”.

In its heads of argument, the Democratic Alliance said the Public Protector has made serious findings of dishonesty, abuse of power and maladministration against Motsoeneng.

‘Irrational’
“The findings stand until they are reviewed by the Public Protector or set aside by a court,” the DA court papers state. “The recommendation and appointment of Motsoeneng as permanent Chief Operating Officer was contrary to the central findings of the report. That alone renders the decisions irrational.”

If the SABC disagreed with the report, the DA suggested it should approach the Public Protector or seek to have the report judicially reviewed.

“Until then, the report is the best evidence available of what role Motsoeneng in fact played at the SABC,” the DA outlined in its heads of argument. “Even if the SABC had good reason to doubt the correctness of the Public Protector’s findings – which is denied – appointing Motsoeneng under the cloud of those findings would be irrational.”

Katz likened this current application involving Motsoeneng to that of the DA’s court case challenge of President Jacob Zuma’s appointment of Advocate Menzi Simelane to the position of the National Director of Public Prosecutions, which was found in a 2012 Constitutional court judgment to be irrational and unconstitutional.

In that case, the court found that Zuma and Jeff Radebe had failed to consider evidence before them about Simelane, including the findings of the Ginwala inquiry into the conduct of the then national director of public prosecutions, Vusi Pikoli. The former speaker of Parliament, Frene Ginwala, who chaired the commission, had criticised Simelane’s approach to evidence and its credibility, and this had not been taken into account when appointing Simelane.

Katz concurred with the Public Protector’s findings that Motsoeneng had committed fraud by writing on an SABC application that he had a matric.

“Dishonesty is dishonesty, wherever it occurs,” said Katz. “In this case, was there a lie? And if there was a lie, it falls into the character of dishonesty. Even if the person (employer) was told that it was a lie, it was dishonesty. Dishonesty does not merely fall away, merely because Mrs Swanepoel told this person to tell a lie.”

Defamed
Advocate Norman Arendse, appearing for the SABC board and other respondents, said that the SABC board had found no basis to charge Motsoeneng, let alone suspend him for fraud or dishonesty.

Arendse said that Motsoeneng had been defamed once again, and he intended to litigate.

There had been a break in Motsoeneng’s employment by the SABC, which had first headhunted him, and then terminated his employment. He was later re-employed by the SABC.

“So in labour law, this issue of his matric is completely irrelevant to his employment,” said Arendse, who read out some affidavits written by staff at the SABC.

Some of these affidavits had been prepared for the Public Protector, said Arendse.  “The Public Protector has done some great work, but this was not one of them,” he said, referring to her report involving Motsoeneng as “flawed.”

The court case continues in the Cape high court on Wednesday. The protesters told the M&G they will be back again, a guarantee that the drama that follows Motsoeneng and the beleaguered SABC will start up again outside court in the morning.