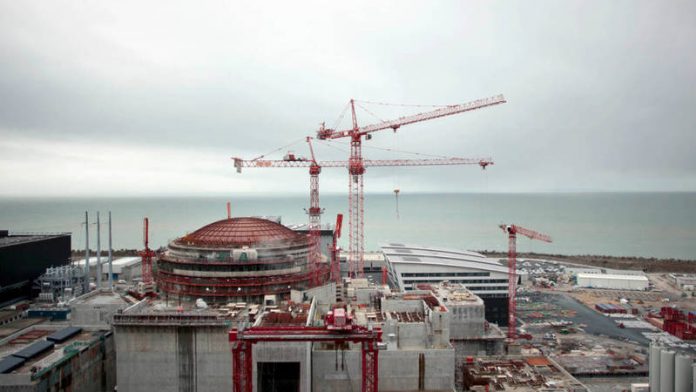 Neo Lesela, an Eskom board member, thought she had “died and gone to heaven”. Ensconced late at night at the Hotel de la Marine in Normandy, France, last December, she was enjoying a gourmet dinner, having set an Eskom nuclear training manual to one side after a hard day’s work.

So enraptured was Lesela that she took four photographs and shared them publicly with her friends on Facebook. But the photos reveal that this was no ordinary document. And Lesela was no ordinary board member.

At the time, she was a member of Eskom’s board and its tender subcommittee. The latter had prevaricated for almost a year over a decision to award a R4-billion steam generator replacement contract for the Koeberg nuclear power plant near Cape Town. 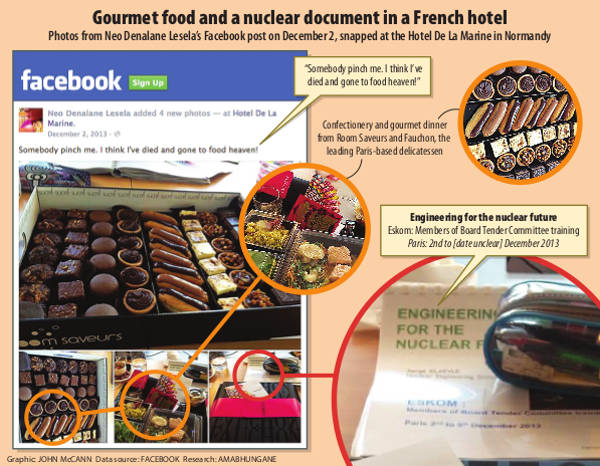 The contract was a neck-and-neck contest between the French nuclear company Areva and the Japanese-owned American company Westinghouse.

The document Lesela unwittingly photographed that night reveals that Eskom’s board tender committee were on a four-day nuclear training trip to France.

The problem with Lesela and the board tender committee’s trip to France last December is that it made them potentially vulnerable to French lobbying while the multibillion-rand tender process was still under way.

Counter
But Eskom this week countered that “board members receive in-house training on nuclear matters on a regular basis” and that, in the case of the trip to France, this training “specifically excluded engagements with vendors/potential suppliers, and engagements with … officials or executives involved in the French new build projects”.

Eskom said that it had paid €42?000 for the training, plus flights and hotels.

All five Eskom board tender committee members were on the trip, plus one additional board member and a group executive.

Eskom said that five other board members had also attended a workshop in the United States hosted by the World Association of Nuclear Operators in October 2012.

But Eskom’s assertion that “training for board members happened in a manner that did not compromise the integrity of Eskom procurement processes” remains open to question, because:

So when Lesela was pulling the lid off a box of luxury patisserie in the early hours of December 3, with the wintery waves of the English Channel breaking on the Normandy beach outside the hotel, the steam generator tender was at a critical stage.

Ten months before, Eskom’s technical team had recommended to the board tender committee that it should approve the award of the bulk of a three-part contract to Westing­house. But the committee hesitated and appointed an external technical consultant, the European firm AF Consult, to review the entire tender.

AF Consult had recommended that the tender be redrawn as a single composite contract, but this was not communicated to the bidders.

Eskom issued a formal request for combined bids on December 13, a week after the board tender committee returned from France.

The new combined bid offer was essentially a lifeline to Areva: whereas it had previously been allocated the smaller portion of a three-part contract, it now had a fresh shot at a winner-takes-all contract.

Lesela’s Facebook profile reveals she was back in Johannesburg on December 7 and, with the exception of a return to France in April this year to run the Paris marathon, has not been anywhere overseas since.

Changes
April was an important month for Lesela. She became the board tender committee chairperson, replacing Collin Matjila who became interim chief executive of Eskom.

Thus, Lesela presided over the final stages of the steam generator replacement contract that culminated in the award to Areva on August 15.

Westinghouse subsequently filed an urgent application in the high court in Johannesburg, seeking to prevent Eskom from concluding a contract with Areva. (See “Westinghouse changes tack”, below”).

Westinghouse alleges (citing confidential sources within Eskom) that all levels of Eskom’s tender decision-making process recommended Westinghouse, including the board tender committee but that within 48 hours Lesela and Matjila took a decision in favour of Areva to Public Enterprises Minister Lynne Brown for her approval.

The same evening after Lesela and Matjila met the minister, Lesela posted on Facebook that she had been to “hell and back”: “What a week, what a day, what an evening. My threshold for stress was put to the ultimate test, and just for good measure, was taken to hell and back this afternoon just as I was coming up for air,” she posted.

Lesela referred all questions to Eskom’s spokesperson, as did her board tender committee colleagues Mafika Mkwanazi and Boni Mehlomakulu. Matjila and the board chairperson Zola Tsotsi did not return calls and SMSes.

Mixed up
An Areva spokesperson said that the board tender committee’s trip to France was part of “a study tour to six countries [that] was arranged by the department of energy on behalf of the South African government for industry stakeholders, including the safety authority and nuclear industry representatives”.

It added: “The study tour included site visits and meetings with the nuclear industry in the United States, Korea, Japan, Russia, China and France.”

But amaBhungane has seen the agenda of the study tour and a list of the people who took part. The group went to France from November 17 to 22 2013 and the only Eskom representative was its senior nuclear power manager, Anthony Stott.

The EDF did not reply to questions.

Westinghouse changes tack
Eskom spokesperson Matshela Koko has previously denied any last-minute chicanery with the R4-billion steam generator tender award, saying that the board tender committee and the executive procurement committee one rung below them both approved an award to Areva.

On Thursday afternoon, Koko confirmed that the utility had already signed a contract with Areva — despite a request from Westinghouse that they hold off doing so pending an urgent application to be heard on Friday (August 5).

amaBhungane understands Eskom made the disclosure to Westinghouse in their responding affidavit, which they filed on Wednesday morning.

Westinghouse had launched the High Court application, in Johannesburg, seeking to prevent Eskom from signing or implementing the contract with Areva.

In a statement released on Thursday afternoon, Koko declared that Westinghouse had withdrawn its application to interdict Eskom’s decision on the Koeberg contract.

But a Westinghouse statement, released shortly afterwards, clarified: “Westinghouse has decided to withdraw its request for an urgent interdict, in order to rather focus on that aspect of its current court application which is directed at obtaining all relevant documentation relating to Eskom’s decision, and the envisaged urgent review proceedings.” — Lionel Faull

Allegations open to doubt
When this report was produced, amaBhungane did not have the benefit of access to Eskom’s detailed response to the Westinghouse interdict application.

Following the filing of Eskom’s answering affidavit by senior executive Matshela Koko, it has become clear that some of the Westinghouse allegations, based on hearsay information from un-named sources inside Eskom, are open to doubt.

In particular, Westinghouse’s sources appear to have got their timing wrong in relation to the meeting with the minister.

In addition, their claim that the final Board Tender Committee (BTC) meeting approved Westinghouse is contradicted by an extract of the draft BTC minutes.

Documentary evidence disclosed by Eskom shows that a letter informing Minister Lynne Brown of the award to Areva was received by the ministry on August 13, and the minister told amaBhungane her staff had confirmed the meeting with BTC chairperson Neo Lesela, acting chief executive Collin Matjila and board chairperson Zola Tsotsi took place on Wednesday, August 13, not on Friday, August 15.

The claim that all levels of Eskom’s tender decision-makers had signed off on an award to Westinghouse, only for Matjila and Lesela unilaterally to take a recommendation for Areva to Brown, is not sustained by the evidence disclosed so far by Eskom.

The evidence confirms that technical and management committees below board level repeatedly recommended Westinghouse, but also shows that external consultants reporting to the Board Tender Committee favoured Areva.

Eskom has so far failed to disclose the full minute of the BTC meeting of August 12, and has only filed a draft extract showing an approved resolution in favour of Areva.

The full minute is likely to throw light on the discussion at board level, in particular the “secret ballot”, but is unlikely to challenge the assertion that the BTC in the end chose Areva.

As a result of the allegations by Westinghouse, amaBhungane drew particular attention to the Facebook posting by Lesela on the evening of August 15 – and its deletion.

Lesela has thus far declined to explain her actions, but they should be viewed in the light of the amended facts recorded in this update.

Since the new evidence became available, Westinghouse has abandoned the interdict but has pursued an urgent review of the Eskom decision in which it pertinently refrains from making or pursuing any allegations about Lesela.

This story has been updated.