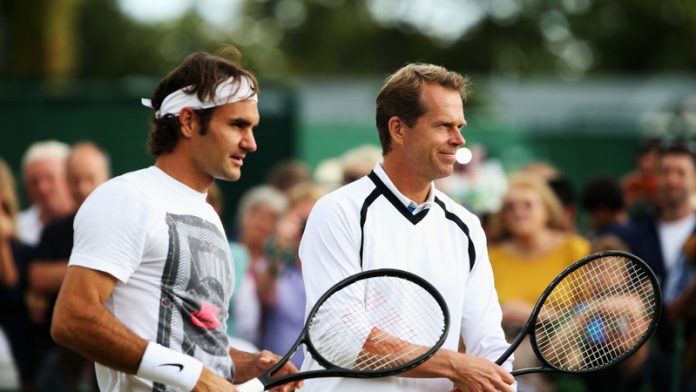 If Boris Becker and Goran Ivanisevic have done their jobs properly, then Monday’s US Open final will be between Novak Djokovic and Marin Cilic.

Becker and Ivanisevic may not be playing tennis anymore but they are having an impact in New York as two of the weekend’s four-strong celebrity coaching brigade.

If their own head-to-head records were duplicated in Saturday’s semifinals, then Djokovic and Cilic would come out on top – Becker enjoyed a record 5-1 wins against Chang while Ivanisevic was 10-9 against Edberg.

But Federer won’t be influenced by such history after Edberg, a back-to-back US Open winner in 1991 and 1992 and a six-time major champion, engineered the Swiss star’s stunning fightback from two match points down in his five-set quarterfinal win over Frenchman Gael Monfils.

“I started to serve and volley some more as the match went on,” said Federer, who takes a 5-0 career lead over Cilic into his semifinal.

“I’m happy I’m spending some time at the net, because that’s going to keep giving me confidence to keep on doing that as we move along in the tournament.”

Federer brought Edberg on board in December as the 17-time major winner, whose last Grand Slam crown came at Wimbledon in 2012, looked for a crucial edge over his younger rivals.

He came close at Wimbledon this year, losing the final in five sets to Djokovic, and now he is back in a US Open semifinal for the first time since 2011, with a first final since 2009 tantalisingly within reach.

“He was very, very close to winning at Wimbledon. I still believe the way he’s playing, and if he can keep working and stay healthy, he’s got a shot of doing very well,” said the low-key Edberg.

Under his tutelage, Federer enjoyed a promising run-up to New York, finishing as runner-up in Toronto before taking the Cincinnati warm-up title.

“In many ways it’s worse sitting in the stands, because you can’t really do anything sometimes. You wish you could. You want him to do well and so it’s a different feeling, but it’s good so far,” said Edberg.

Extroverts
Of all the star coaching appointments, Becker’s was undoubtedly the most surprising when he signed up with Djokovic.

The six-time major winner, including the 1989 US Open, enjoyed a lucrative media career when he agreed to work alongside Marian Vajda, who has handled the Serb since his teenage years.

“He believes in my game,” said Djokovic, who faces Nishikori in his semifinal on Saturday looking to reach the US Open final for a fifth successive year.

Becker said he sees similarities between himself and Djokovic, both equally extrovert on and off the court.

“I see in Novak a little bit of Boris Becker,” the German told CNN on the eve of the US Open.

“I see him against Rafael Nadal and Roger Federer and he doesn’t always get a fair deal from the crowd. I live with Novak. Whenever he makes a mistake I feel that I make it too.”

Countrymen
Ivanisevic started working with Cilic in November 2013, just as the young Croat was returning to the tour after serving a doping ban.

Together, they reached the quarterfinals of Wimbledon and now a first-time spot in the US Open semifinals.

“The main part that is coming from Goran to me and what I feel in this relationship is big confidence,” said Cilic, who made the last four by knocking out sixth-seeded Czech Tomas Berdych.

“All the things we are working on, they’re working for me on the court. Having him beside me is definitely another plus, big plus to have him in my box.”

Shared history
Chang has been with Nishikori since December and has his own little bit of history at the US Open – in 1987, when he was just 15, he became the youngest man to win a match at the tournament.

Nishikori, the first Japanese man since 1918 to make the semifinals, has a 1-1 record against Djokovic and Chang believes there’s no reason why the 24-year-old can’t take a second win.

“Absolutely. He’s beaten Novak before. There’s no reason why he’s not able to do it again. Come Saturday, I think it’s going to be a great match,” Chang told the New York Post. – AFP