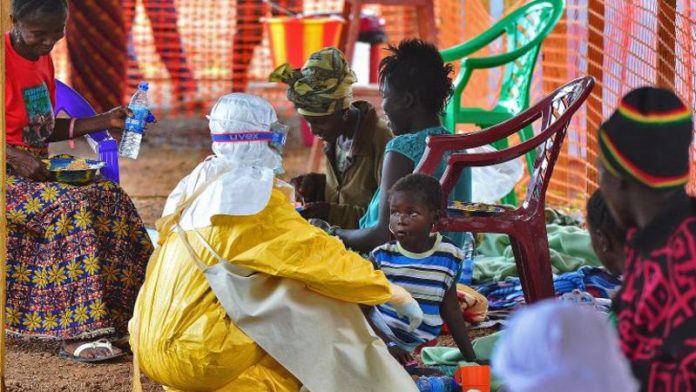 Health workers on Wednesday reported being overwhelmed by new Ebola cases at the epicentre of an outbreak described as an existential threat to hardest-hit Liberia.

The World Health Organisation (WHO), which raised the death toll to nearly 2 300, has predicted an “exponential increase” in infection across West Africa, and warned that Liberia in particular will face thousands of new cases in the coming weeks.

“We are overwhelmed. The patients keep coming in [huge] numbers. Yesterday we received up to 30 patients,” Sophie Jane, a spokesperson for Medecins Sans Frontieres (MSF), told Agence France-Presse at the aid agency’s Ebola unit in Monrovia.

The WHO upped the death toll on Tuesday to 2 296 out of 4 293 cases in Liberia, Sierra Leone, Guinea and Nigeria. Nearly half of all infections had come in the past 21 days, it said. Liberia, with 1 200 dead, has borne the brunt of the outbreak, and has run perilously short of space at the few Ebola treatment sites operating.

The WHO said Montserrado county, which contains Monrovia, needed 1 000 beds. It reported that infected people were being driven to centres in the capital only to be turned away, return home and create “flare-ups” of deadly fever in their villages.

Bystanders watched warily on Wednesday as a man turned away by the MSF centre in Monrovia struggled to stay on his feet. “I came but they say they have no space. I have strong headache and I have fever. I am trying to get back home,” the man told AFP.

Residents interviewed by AFP described an atmosphere of fear paralysing daily life in the Liberian capital. “I am afraid. I don’t know what to do now actually. Where are we going? Are we all going to die? If WHO can say this kind of thing it means we are finished,” said Monrovia resident Kluboh Johnson (45).

Trade dying
Meanwhile businesses said trade was drying up as people stayed indoors, afraid of infection. “A few people will come and take one or two bottles of beer, but custom is no longer like before. They are afraid to come out because of Ebola,” the owner of one bar told AFP.

“I am afraid myself. One man came here last night and started to drink abundantly. “When I asked him what was wrong, he asked me if I did not hear that thousands of people are going to get Ebola in the coming weeks.”

Liberian Defence Minister Brownie Samukai told a meeting of the United Nations Security Council on Tuesday that the country was facing “a serious threat to its national existence”. The disease is “now spreading like wildfire, devouring everything in its path”, he said.

Ebola, transmitted through bodily fluids, leads to haemorrhagic fever and – in over half of cases – death. There is no specific treatment regime and no licensed vaccine. The WHO has evacuated its second infected medical expert, a doctor who had been working at an Ebola treatment centre in Sierra Leone.

Emory University Hospital in the United States admitted an American on Tuesday who had contracted the disease in West Africa, but declined to confirm whether the patient was the WHO employee.

But in Senegal and Nigeria, the aim was “to stop transmission completely”, she added. Nigeria has recorded 19 infections and eight deaths, but the news was better in Senegal, where authorities said on Wednesday a Guinean student who was the country’s only confirmed case had recovered.

Guinea’s President Alpha Conde described Ebola on Tuesday as a “war” his nation – with 555 dead so far – needed to win. He slammed neighbouring states including Côte d’Ivoire and Senegal for shutting their borders, and airlines for suspending flights to affected countries.

The Gambia has closed its borders to Guineans, Liberians, Nigerians and Sierra Leoneans – though not to neighbouring Senegal. China, one of the region’s main investors, also announced on Tuesday it was reinforcing checks on people, goods and vehicles – and even mail – arriving from affected countries.

Italy provided a rare glimmer of good news on Wednesday by reporting a false alarm. A woman recently returned from Nigeria was sick with and being treated for malaria, not Ebola, health authorities said. – AFP