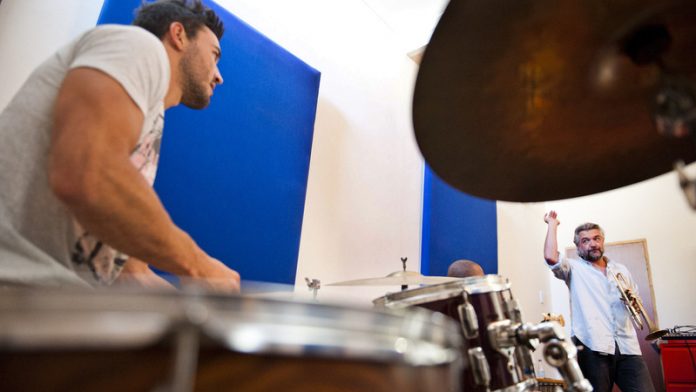 As history tells it, “Maji” was a form of spiritual protection afforded to the Matubi people, and later many other tribes in the former German East Africa, as they raged against colonial rule in the early 1900s. The water of the gods, it was called.

That it was administered and imbibed in the context of a rebellion would only occur to Marcus Wyatt, esteemed South African jazz trumpet player and founder of Language 12, after he named the band’s latest album after this potent potion.

But now the concept of rebellion sits comfortably with him. “Maji is the protection. The ‘land of milk and honey’ is here, and I guess we all need protection from various things in the land from time to time,” Wyatt says.  Maji Maji in the Land of Milk and Honey, Language 12’s second album, released last week, is an assembly of musical themes. It is a highly unpredictable album, but always clean and melodic.

“This band, perhaps more so than the jazz projects I’m involved in, is a true reflection of who I am as a South African musician,”  Wyatt says. “There’s the classic jazz sound but there’s also elements of everything else I’ve ever done in there. The only thing I hope for is for people to listen to this record and be able to say ‘this doesn’t sound like this or that other thing’. Then it means that everything is coming out in a natural way.”

The record segues between genres, including rap, jazz, drum and bass, quite organically. It is at its core a “groove project”, Wyatt explains. This is not a jazz album. It is an anthology of influences and searing melodies, with occasional rapping by MC Gwaza.

Maji Maji is light and funky in places, and gravely dark in others. That Day She Left (the title is self-explanatory) is at times maddening in its pain and melodic beauty. Some tracks later, drummer Justin Badenhorst rocks out unexpectedly during key choruses on Klipdrift Cinderella.

There are also no solos as one would expect from a jazz album, but the inescapable truth that a jazz musician composed this is always present, harmonically. The album is then perhaps an unconscious rebellion. But a rebellion against what, or whom?

It certainly isn’t a political album, or even a conceptual one. But Maji Maji is no lab rat, and to say Wyatt and the band have tried to rebel against whatever genre they have been associated with as individuals is to tie them to a dreadful cliché that they did not articulate themselves.

Yet Maji Maji remains intellectually stimulating high art, without pretence and over-complication. So in a way, to apologetically employ another hackneyed phrase, the band has transcended genre. Wyatt likens this to a circle: the music “doesn’t just go in one direction”. The key to achieving this is perhaps that its design is unconscious: few composers write conceptually first and musically second. Most often, the music dictates the concept. Wyatt is no different.

Melissa van der Spuy (piano), Badenhorst and Prince Bulo (bass), a formidable rhythm section, create solid parameters in which Wyatt and vocalist Siya Makuzeni can play on this record. The singer and trumpeter’s pas de deux is neatly balanced: despite the presence of such strong established soloists on the album, no artist emerges more triumphant than the other.

But Makuzeni must be given credit for her highly emotive delivery. She is a majestic vocalist, rich in tone, expansive in range, and wise in interpretation.

In a recent interview Wyatt was asked if he could name his “musical best friend”. “I went through a few people’s names: Buddy Wells, Sidney Mnisi, Carlo Mombelli and a few other people. Then I started talking about Siya [Makuzeni] and the interviewer stopped me and said: ‘It’s quite obvious. I’ve written two pages about Siya and just a paragraph on the others.’”

Wyatt first heard Makuzeni, who also plays trombone, sing at a concert in the Eastern Cape. The vocalist was a teenager. The two started working together shortly afterwards. “She’s an incredibly special musician. I also love her to bits as a human being, and musically, I think that’s why we are so tight. We trust each other immensely. It makes me smile when I listen to some of this. After so many years, we have such a synergy together and it’s beautiful,” Wyatt says.

It’s a theme that runs throughout the band: each artist is personally invested in the album’s production: Badenhorst did the cover artwork; Romy Brauteseth, who doubles on some tracks on upright bass, designed the album sleeve, for example. Although Wyatt theoretically has veto power, he rarely uses it, preferring a democratic order of things to prevail in the band.

Language 12 has toured internationally several times now, just as Wyatt has with his various other projects. But this project is “special”. “The idea behind it is you have all these different influences but they don’t come out in a preconceived way, they come out naturally. People have this perception about what South African jazz music is and I think often people will try to write something in a certain way so that it sounds like ‘South African jazz’,” Wyatt explains.

“But that’s such a small part of who we are as a musical nation.”

Following the Johannesburg launch of the album in September, Language 12 will release their album in Cape Town in October. The band will perform at Dragon Room on October 1 and 3, and at The Crypt on October 2.