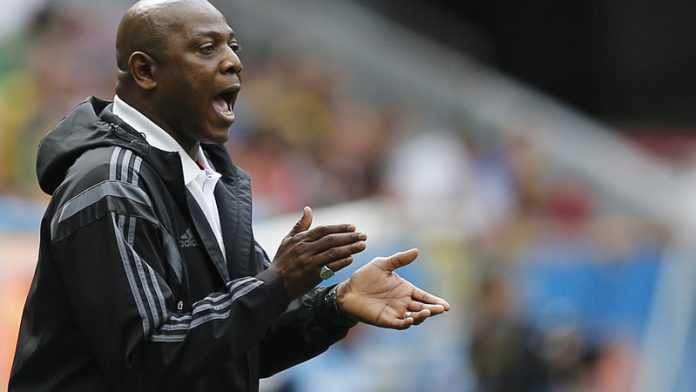 The Nigeria Football Federation (NFF) said after an emergency meeting that former coach Shuaibu Amodu would take temporary charge before a foreign manager is appointed.

The Super Eagles were rock bottom of Group A in qualifying for next year’s Africa Cup of Nations after winning just one point in three matches, but a 3-1 win against Sudan in Abuja on Wednesday lifted them to third. Speculation about 52-year-old Keshi’s future has refused to go away since the end of the World Cup finals in Brazil in July, where Nigeria reached the knock-out stages of the competition.

Dissatisfaction
Keshi’s three-year deal ran out after the return from South America while he lost the support of players after much-publicised rows with the likes of Emmanuel Emenike, Peter Odemwingie and Ikechukwu Uche. His record of five defeats, five draws and just one victory in the past 11 matches has only compounded dissatisfaction and led to calls for him to quit. In a statement, the NFF said Keshi and his coaching staff had led Nigeria to “glorious accomplishments” in the last three years and called the coach and his assistants “true national heroes”.

“However, in the interest of Nigeria football and the desire to ensure qualification for the 2015 Africa Cup of Nations finals, the [executive] committee decided to relieve them of their duties with immediate effect,” it added. Unanimous approval was given for a consortia of coaches, led by Amodu, to lead Nigeria in their remaining qualifying matches against Congo and South Africa “after which an expatriate coach will be appointed”.

Securing a win
Amodu’s re-appointment comes four years after he was sacked and stopped from leading the country to the 2010 World Cup in South Africa. This will be his fifth stint with the Eagles having first taken charge of the team in 1994. The 56-year-old will be assisted by El Kanemi Warriors coach Salisu Yusuf, who worked under Samson Siasia both with the Flying Eagles and Super Eagles, and Gbenga Ogunbote of Sharks. Their immediate task is to secure a win against Congo in Pointe Noire to stay in the reckoning for a place at the Africa Cup of Nations in Morocco in January.

Nigeria have four points from as many matches while Congo are second on seven points. Group leaders South Africa travel to Nigeria for the final qualifying game next month. Keshi’s sacking comes despite NFF president Amaju Pinnick saying this week that the football association would not rush into a decision over Keshi’s future. “We want our people to be patient and not stampede the federation to take knee-jerk decisions that will backfire in the end,” he said on Monday. – AFP