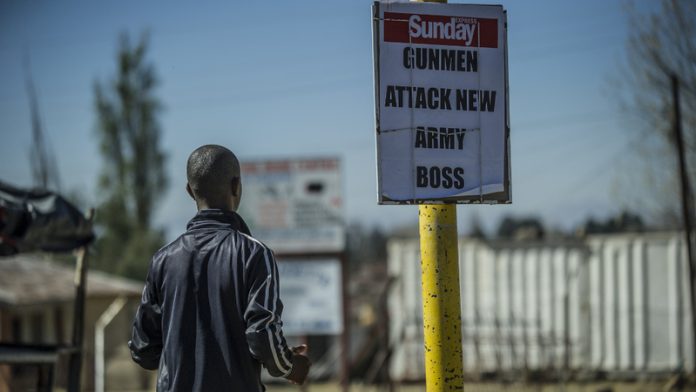 Opposition parliamentarians celebrated with song and dance on the floor of the legislature as the chamber sat for the first time in four months.

Prime Minister Tom Thabane had suspended the body in June fearing a vote of no-confidence that could have booted him from power.

The re-opening of Parliament is a key first step in a peace deal following an August 30 coup attempt and will lead to early elections in February 2015.

The king, who is constitutionally restricted to a ceremonial role, thanked the international community – and particularly the 15-nation Southern African Development Community (SADC) – for helping to defuse the crisis.

“On behalf of the Basotho nation, I would like to express … our deep-rooted gratitude for expeditiously coming to our assistance at this critical moment in our political journey,” King Letsie told the 120-member chamber, as the SADC mediator, South African Deputy President Cyril Ramaphosa, looked on.

As the king filed out, followed by Thabane, his feisty opponents, led by former prime minister Pakalitha Mosisili, then filled the floor, singing and swaying.

“Democracy begins again,” said one parliamentarian, Kotiti Diholo of the Democratic Congress. “There was no longer democracy in this country but now we can get back to representing our people.”

Peace deal
On August 30 Thabane fled the tiny kingdom, entirely surrounded by South Africa, hours before the military attacked police installations, in what was seen as part of an orchestrated putsch.

Thabane returned accompanied by SADC police and officials, who have since hammered out a peace deal among Lesotho’s sparring factions.

Crucially, the opposition have agreed not to mount a no-confidence vote against Thabane while this Parliament is in session.

Instead, they allowed the parliament to re-open and to pass a budget, then officially dissolve in order for the country to prepare for early elections.

But in a sign of on-going instability, officials cancelled the military parade that traditionally opens Parliament.

Armed forces
That also dodges the difficult question of who is in charge of the armed forces.

While Kamoli refuses to step down, his replacement has required South African police guards after an attempt on his life was made during the coup.

Having avoided a vote of no-confidence, Thabane now faces an election which could have the same effect and see him lose office.

The Democratic Congress is already the single-largest party in Parliament and has an agreement to join forces with the party of Deputy Prime Minister Mothetjoa Metsing – which is part of Thabane’s coalition government.

But their dancing did not impress Lesotho’s Minister of Home Affairs, Joang Molapo.

“This is false bravado,” he said. “They always make a lot of noise. But we on the other side know how the deck is stacked.

“And we know that the Basotho people recognise who has been the destabilising element in this country.”

Molapo suggested the root cause of the crisis has been corruption – and resistance to Thabane’s crusade to expose it during the two years since he created one of Africa’s rare coalition governments.

Metsing is now accused of both corruption and involvement in the recent coup attempt. – Sapa-AFP