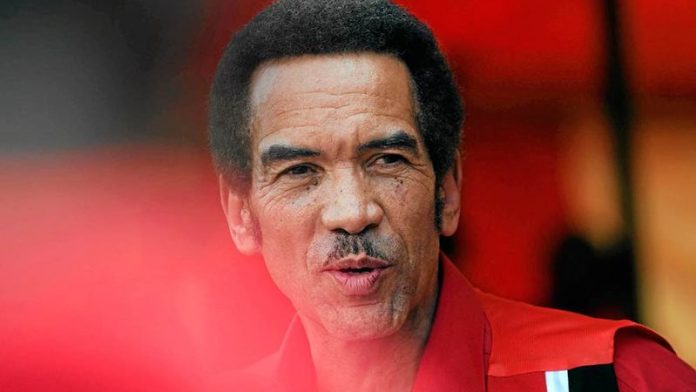 He was born to a white mother in the English village of Ewell in Surrey, appeared on the BBC’s Top Gear, leads a country ranked the best governed on the African continent and often gets asked why, at 61, he has never married.

On Friday, Ian Khama, the president of Botswana, will stand for  re-election in what could be the tightest poll in the history of the world’s biggest diamond producer.

To his critics, the retired army general, whose Botswana Democratic Party is widely expected to retain the grip on power it has held for almost half a century, is an ascetic and increasingly authoritarian figure with a particular antipathy towards journalists and a callous disregard for the Kalahari Bushmen, whom he says have an “extinct” and backward way of life.

Yet the country ranks third on the latest Ibrahim Index of African Governance, behind the islands of Mauritius and Cape Verde and ahead of neighbouring South Africa.

Framed photos of Khama’s parents – Sir Seretse Khama, Botswana’s first post-independence leader, and Ruth Williams, a wartime ambulance driver from Blackheath in south London – look down on his desk in a relatively modest building in the capital, Gaborone.

Being single
His parents’ marriage was described by Julius Nyerere, the first president of Tanzania, as a great love affair, but Khama remains  single, a source of much speculation. He is happy to discuss the subject at length.

“You know, it’s the only thing in my life that I’ve ever been indecisive about.

“If I embark on anything, I want to be able to know it will work out and I know that if I put in effort, I’m pretty confident it will. But with marriage it’s not like that, despite your best efforts.”

Potential partners should not expect to party all night. Khama is in the gym by 4.30am, at work by 7.30am and goes to bed at 8.30pm. He enjoys caving, quad biking and powerchuting (motorised parachuting) and his cameo in a Top Gear Botswana special came in 2007.

“I’m an outdoor person, so you won’t find me sitting down reading a book, relaxing doing something,” he explained, though the large, two-volume Shorter Oxford English Dictionary resides behind his chair.

The teetotaller has imposed high taxes and strict opening hours for the sale of alcohol, and the police operate mobile testing centres known as “booze buses”.

Puritanical discipline
Some see Lieutenant General Khama, a product of Britain’s Royal Military Academy Sandhurst, as attempting to impose puritanical discipline on the nation of two million. This includes the Bushmen, or Basarwa, the oldest inhabitants of Southern Africa. The campaign group Survival International says the Bushmen were illegally evicted from their ancestral homeland in the Central Kalahari Game Reserve.

Earlier this month it alleged that more than 200 Bushmen had suffered beatings, arrests and abuses by Botswana’s wildlife officers and police. Khama said the Bushmen had been allowed to live in the reserve because “their method of hunting was low impact – bows and arrows – and their method of transport was on their feet”, but when they started using horses and sophisticated weapons, and were paid to hunt, there was severe loss of wildlife.

“Just because they have had this way of life for many years, they have to be moved into the modern way of doing things. Give them livelihoods which will allow them and their children to live better lives and not do what Survival International expects, to continue living a very extinct form of life, a very backward form of life, denying them – and especially their children – opportunities to grow with the mainstream of our citizens.”

Such words are likely to be seized on by Khama’s critics, who portray him as a cold, aloof dictator-lite. He has his answer ready: “I didn’t know what you were going to ask me but I knew that one would come up, because every journalist brings it up, and I always say to them, look again at the rankings and look at how they’ve been improving since I took office. If I were a dictator, we wouldn’t enjoy those rankings. “Then I always say to them: ‘Give me examples of what it is which is dictatorial’ because when I swore to uphold the Constitution and the laws, that is something I always do.”

Khama, who became president in 2008 and is constitutionally obliged to step down in 2018, is one of the few African leaders who has stood up to China and Zimbabwean President Robert Mugabe, and has seemingly escaped the “resource curse” as Botswana’s diamond wealth is converted into generous social welfare benefits. Should this week’s election go against him, he insists he and his party will accept defeat.

Press freedom
Yet Khama, who never holds press conferences, has come under scrutiny because of threats to the media. Last month, Outsa Mokone, editor of the Sunday Standard newspaper, was arrested and charged with sedition, and a reporter fled the country, saying he feared for his life. Khama claims they published a story about him that was inaccurate, defamatory and so outrageous that police decided “a crime had been committed”.

He went on: “Freedom of the press is not a licence to tell untruths. We see a lot of it here: we are constantly putting out corrections on stories but then eventually you get to a limit. They can put out a story and try to twist the facts, but when they actually manufacture something which has no truth whatsoever, then I think at some stage you say well, a line has been crossed.”

But when the Guardian visited Mokone, he offered a different perspective. The editor refused to be interviewed in his office because he was certain it was bugged. At a nearby coffee shop, he took the battery out of his cell phone so his location could not be traced. “That’s the way it is now,” he said. “Botswana has changed a lot. Ten years ago, a stranger would come knocking at my door at 12 midnight and I wouldn’t even think twice – I would just open for them. But you can’t do it now. When you’re driving on the road you have to be looking in the rear-view mirror to see who’s tailing you.”

Khama has made his distaste for the press clear, Mokone continued, and there has been a hardening of attitudes and a spike in potentially crippling lawsuits. “He’s a good person, but he is obsessed with control … you have a very bad combination here: a control freak and a system that gives the president absolute power.”

Mokone is convinced that Botswana’s status as the darling of organisations such as the Ibrahim Index and Transparency International is outdated.

“I believe from here it’s going to be downhill,” he sighed. “It’s going to be very difficult to reverse this. President Khama has done serious damage to this country.” – © Guardian News & Media 2014