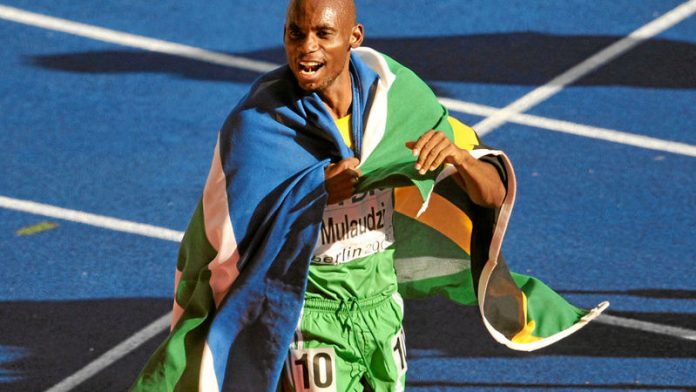 President Jacob Zuma is shocked and saddened over the passing of Olympic silver medalist, Mbulaeni Mulaudzi, the Presidency said on Friday.

“The nation has lost a true hero and one of our most disciplined and talented athletes who flew the South African flag across the sporting globe,” said Zuma.

“We wish to convey, on behalf of government and the entire country, our heartfelt condolences to his family, ASA, the South African sports fraternity and the International Olympics Committee. May his soul rest in peace.”

Spokesman Mac Maharaj said Mulaudzi died in a road accident on his way to an Athletics South Africa (ASA) meeting in Johannesburg.

The South African Sports Confederation and Olympic Committee (Sascoc) said his legacy would live on forever.

“We are deeply saddened and shocked by the unexpected death of our Olympian, Mbulaeni Mulaudzi. We have lost yet another icon in the South African sport who raised the nation’s flag high in international sporting events. We will always remember the legacy he has left in South African sport,” CEO Tubby Reddy said.

He was the flag bearer for South Africa at the opening ceremony of the Summer Olympics in Athens and he became South Africa’s first black athlete to be ranked number one in the world.

After a decorated career which spanned over a decade, the 34-year-old retired last year.

The ANC said his passing had robbed the country of a prolific athlete.

“His passing has robbed us of a prolific athlete who still had a role to play in reproducing future athletes who would learn from his successes and maintain our visibility as a winning country in the leagues of sport,” said spokesman Zizi Kodwa.

“We extend our condolences to his family and the athletic community as they come to terms with the sad end of an accomplished life. We believe that his achievements will inspire many to follow in his footsteps. May his soul rest in peace.”

National hero
The ANC Youth League said it would always be proud of him.

“We will always be proud of him and his name shall forever be that of a national hero from humble beginnings and walks. One of the greatest South African middle distance runners and 2009 world champion in men’s 800m,” said spokesman Sicelo Shembe.

“Mbulaeni Mulaudzi has been an exemplary, disciplined and humble rising star of our sporting fraternity. At 34, he had already demonstrated that he was destined for bigger achievements in life. He left us too soon.”

“The minister of sports and recreation, Fikile Mbalula, MP, has just received the sad news of the untimely death of South Africa’s 800m Icon, Mbulaeni Tongani Mulaudzi,” the office said in a statement.

It is not known where the accident happened. Further information on the long distance runner’s death would be made public once Mbalula had met with the family.

“Mulaudzi, who is the former World Champion… passed on this afternoon in a car accident. Further details of his death will be divulged once the minister has interacted with his family. Minister sends his heartfelt condolences to the Family of Mbulaeni Mulaudzi.”

Fellow athlete and Olympic silver medalist Khotso Mokoena, who is a long jumper, took to social media to send his condolences.

“I’ve lost a brother, a friend a champion! Sad news to my soul! Will miss you my brother! RIP… Death be not proud!!,” he wrote on Twitter.–Sapa