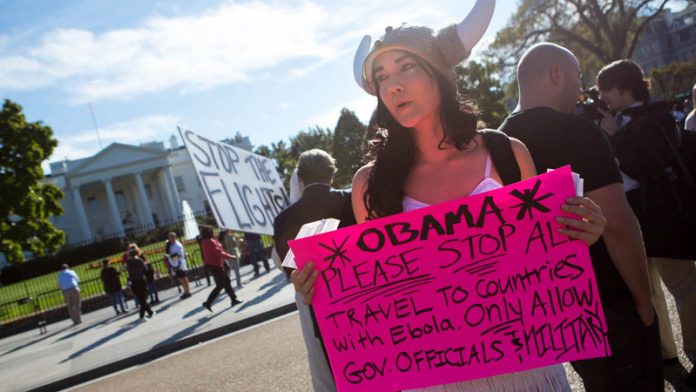 New York and New Jersey will automatically quarantine medical workers returning from Ebola-hit West African countries and the US government is considering the same step after a doctor who treated patients in Guinea came back infected, officials said on Friday.

The steps announced by the two states, which go beyond the current restrictions being imposed by President Barack Obama’s administration on travelers from Liberia, Sierra Leone or Guinea, came as medical detectives tried to retrace the steps in New York City of Dr. Craig Spencer, who tested positive for Ebola on Thursday.

In the first instance of the new move, a female healthcare worker who had treated patients in West Africa and arrived at the Newark, New Jersey, airport was ordered into quarantine.

She had no symptoms upon arrival at the airport but developed a fever Friday evening, the New Jersey Health Department said in a statement.

She is now in isolation and being evaluated at University Hospital in Newark. The agency gave no further details.

“Voluntary quarantine is almost an oxymoron,” New York Governor Andrew Cuomo said. “We’ve seen what happens. … You ride a subway. You ride a bus. You could infect hundreds and hundreds of people.”

Cuomo had earlier in the day sought to reassure New Yorkers that the risk of Ebola’s spread in the city was limited.

He appeared at a news conference to announce the new quarantine policy with the governor of neighboring New Jersey, Chris Christie, marking a bipartisan teaming of two prominent political figures to act at the state level, independently of the federal government.

Cuomo is seen as a rising star in the Democratic Party led by Obama, and Christie, a Republican, is widely discussed as a potential 2016 contender for the White House.

Reassurance
In Washington, Obama also sought to reassure a worried public with an Oval Office hug of Dallas nurse Nina Pham, who was declared Ebola-free on Friday after catching the virus from a Liberian patient who died.

But Republican lawmakers, many of whom for weeks have called for a tougher response to Ebola, continued their criticism of the administration at a congressional hearing.

Cuomo said the US Centers for Disease Control and Prevention (CDC) had agreed that individual states have the right to exceed federal requirements.

A federal quarantine of healthcare workers returning to the United States from the three West African countries was one of a number of options being discussed by administration officials, Tom Skinner, a CDC spokesman, told Reuters.

Spencer (33) who spent a month with the humanitarian group Doctors Without Borders in Guinea, was the fourth person diagnosed with the virus in the United States and the first in its largest city.

Three people who had close contact with him remained quarantined and all three were still healthy, officials said.

The virus is not airborne but is spread through direct contact with bodily fluids from an infected person who is showing symptoms.

Striking the right balance
The Obama administration has implemented a series of steps aimed at preventing the further spread of Ebola in the US but has stopped short of a travel ban on people from Liberia, Sierra Leone or Guinea called for by some politicians.

The US is funneling travelers from those countries through five airports conducting special screening for signs of infection and is requiring them to report to health authorities for the 21-day Ebola virus incubation period. The airports include JFK and Newark.

“We want to strike the right balance of doing what is best to protect the public’s health while not impeding whatsoever our ability to combat the epidemic in West Africa. Our risk here will not be zero until we stop the epidemic there,” Skinner said.

White House spokesman Josh Earnest declined to discuss the possibility of a nationwide quarantine policy but said “these kinds of policy decisions are going to be driven by science” and the advice of medical experts.

A senior administration official said it was important for the US to take “coordinated” action on the issue, noting federal officials had met as recently as Friday morning, but have not yet made a decision.

“It’s a severe restriction that the use of which should be very much guarded, that people should have a right to an attorney and some type of due process,” said attorney Joel Kupferman, executive director of the New York Environmental Law and Justice Project. “When they quarantine someone, they should make sure that they are not treated as a criminal.”

Nurse released
Pham, one of two nurses from a Dallas hospital infected with Ebola after treating the first patient diagnosed with the disease in the United States, walked out smiling and unassisted from the Bethesda, Maryland, hospital where she was treated.

Emory University Hospital in Atlanta and the CDC also confirmed that the other nurse, Amber Vinson, no longer had detectable levels of virus but did not set a date for her to leave that facility.

Pham, who was transferred to the US National Institutes of Health (NIH) Clinical Center in Bethesda, Maryland, from the Dallas hospital on Oct. 16, thanked her doctors at a news briefing.

Looking fit in a dark blazer and a turquoise blouse, Pham said that even though she no longer is infected, “I know that it may be a while before I have my strength back.” She said she looked forward to seeing her family and her dog.

The worst Ebola outbreak since the disease was identified in 1976 has killed at least 4 877 people and perhaps as many as 15 000, predominantly in Liberia, Sierra Leone and Guinea, according to the World Health Organization (WHO).

Spencer’s case brought to nine the total number of people treated for Ebola in US hospitals since August.

Only two contracted the virus in the United States; the nurses who treated Liberian national Thomas Eric Duncan.

Duncan died on October 8 at Texas Health Presbyterian Hospital in Dallas, where Pham and Vinson were infected.–Reuters